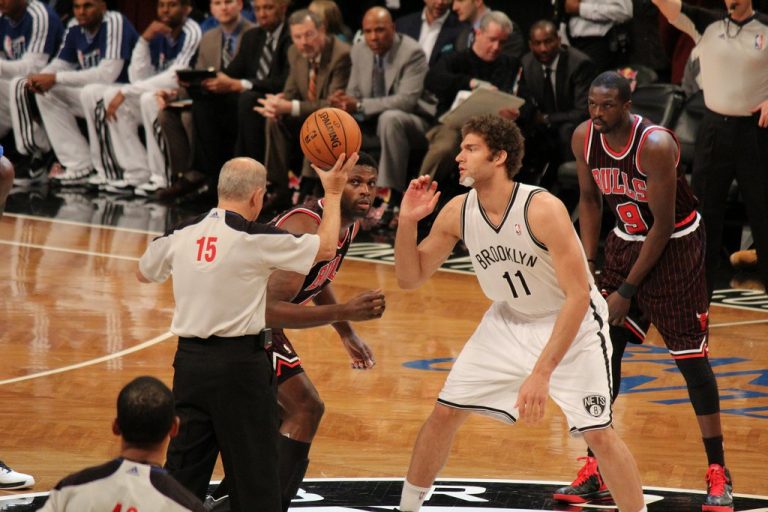 There is no player who exemplifies the current Nets roster more than Brook Lopez. Since he was drafted 10th overall in the 2008 NBA draft, Lopez witnessed the Nets moving from New Jersey to Brooklyn, firing an array of head coaches and slowly turning into the league’s laughing stock. None of it was his fault; throughout his eight seasons with the Nets, Lopez was often the brightest spot in an increasingly disappointing and doomed squad. As time went on, his production steadily reached all-star numbers: 18.3 points, 7.4 rebounds and 1.7 blocks per season. In 2013, he made his first appearance in an All-Star game.

And it seems as if his story with the Brooklyn Nets is not yet finished. Mere days after Sean Marks took over the reins as the team’s general manager, he went out of his way to assure Lopez that he considered him a building block for the long-term.

Along with his twin brother Robin, Brook Lopez started off his basketball career at San Joaquin Memorial, a high school situated in Fresno, California. In 2006, the Lopez twins moved to the Stanford University, which was to be their home for the next two years. In their sophomore season, the duo led the Stanford Cardinal to the Sweet Sixteen of the 2008 NCAA Tournament, narrowly defeating Marquette on a buzzer-beater by Brook Lopez. After being named to the All-Pac-10 First Team, Brook Lopez declared for the 2008 draft, where he was eventually selected by the New Jersey Nets. With Robin Lopez getting drafted by the Phoenix Suns, this marked the first time he and Brook would not be playing for the same team. Considering the twin 7-footers had an innate understanding of each other’s games, many NBA analysts were wondering how the separation would affect their playing styles.

As it turned out, Brook Lopez figured it out quickly enough. After the team’s starting center Josh Boone suffered a minor injury, Lopez seized the opportunity with both hands and started producing decent numbers in his characteristic, quiet way. By the end of the season, the starting spot was his to lose; in addition to being the fourth best blocker in the entire NBA (154), he was voted the third best rookie of the year. His statistics gradually improved in the two seasons that followed, but a right foot injury during the lockout-shortened 2011-12 season saw him play only five games throughout the year. During this period, the Nets were not particularly successful, even after trading for the All-Star guard Deron Williams; in addition to missing the playoffs in each of the four seasons, their 12-70 record in the 2009-10 season was one of the worst records in the history of the league.

The move to Brooklyn and a four-year contract extension worth $61 million seemed to be a signal of a fresh start for Lopez, the feeling validated when he was invited to the first All-Star Game of his career. The 2012-13 season also saw him venture into the playoffs for the first time in his career. Though the Nets were eventually defeated by the Chicago Bulls in a hard-fought seven game series, Lopez started all seven games for his team and averaged 22.3 points, 7.4 rebounds and an incredible 3.0 blocks per game. The future seemed bright for the Nets and their fans.

And then, of course, they traded for Kevin Garnett, Paul Pierce and Jason Terry. Following a foot injury that took Lopez out of contention after just 17 games in the 2013-14 season, he returned to his old ways the following season and played an integral part in the Nets’ journey to the playoffs, where they lost a six game series against the Atlanta Hawks. As Billy King’s experiment quickly turned into a disaster, Lopez entered the 2015-16 season as the team’s only reliable go-to scorer, recording over 20 points per game in an otherwise unremarkable year.

In his eight-year NBA career, Lopez has been the definition of a multi-faceted scorer. Capable of getting to the basket in a myriad of ways, Brook Lopez has proven himself as one of the most offensively gifted big men in the league. His abilities to finish at the rim, attack the basket off the dribble and score a jumper from near the three-point line have all reached elite levels. He has always been a huge pick-and-roll and pick-and-pop threat, and he has only gotten more efficient in that aspect over the years. His post-ups are a thing of beauty; he can spin around defenders and finish through contact, hit them with a series of jab steps and move in for an easy layup or shoot a fade-away jumper from a safe distance. This kind of versatility is a rare skill in today’s NBA, especially when it comes with the body of a 7-footer.

Despite his scoring prowess getting most of the press, Lopez has always been an underrated facilitator. Since he was a focal point of the team’s offense during the majority of his time with the Nets, he didn’t often get the chance to throw the ball to somebody else. However, he routinely looks for cutters before going to town in the post, and he is patient enough to wait for the right opportunity to present itself. His quick feet and shot blocking ability also make him a decent defender, though his propensity to stick close to the basket on the defensive end is definitely something he should work on.

While most NBA executives likely wouldn’t hesitate to trade Lopez away for a couple of draft picks and more cap space, the reality is a lot different. He’s simply too talented of a scorer and too much of a proven commodity to command such a low price. In a landscape where Timofey Mozgov can get a four-year, $64 million deal, the Nets are better off holding onto Lopez and making him an integral part of their future roster. Sean Marks was smart enough to realize this as soon as he took over as general manager, and it doesn’t seem likely we’ll see Brook Lopez in another jersey for the foreseeable future. Now all he needs is a roster that can emphasize his strengths, and Jeremy Lin is the perfect partner for the Brook-LIN™ pick & roll.