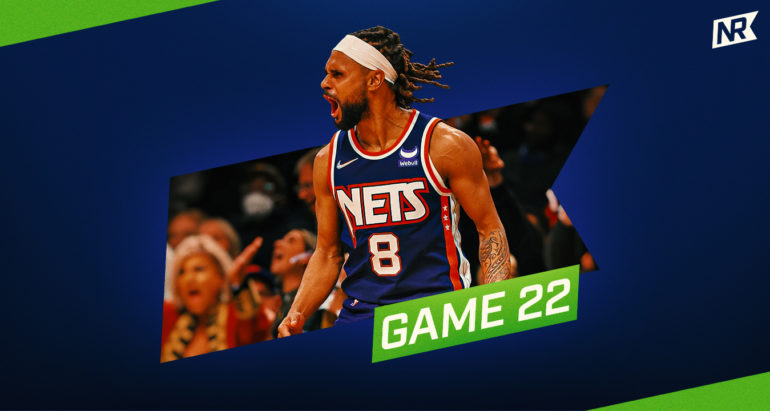 Friday night’s game marked the return of a famous Nets point guard. No, I know what you’re thinking, not Kyrie Irving, but D’Angelo Russell. While many overlook Russell’s time spent with the Nets, it is crucial to understand the contribution he had to the organization’s success. Joining shortly after the Nets’ underachieving 2016–2017 season, he managed to bring the team from 20 wins to 42 wins in just two years. Russell aided in paving a path of success, the same path the 2021 team is currently trekking across.

Despite going into the game with +7.5 odds, the Nets started the match lagging behind the Timberwolves. By the end of the first half, the Nets were trailing 34–27; however, what we learned from this game is far more important than the lackluster start the team experienced.

While it was certainly not the Nets’ best outing, two exciting points came from the 110-105 win against the Timberwolves.

Averaging an extremely impressive 28.6 PPG this season, Kevin Durant has been playing at the top of his game, in nearly every game. Just moments after the opening tip, Durant took no time to impose his dominance on each Timberwolves player. From the demonstration of his unparalleled catching and shooting to his impressive playmaking with Patty Mills, Durant’s performance could be described as nothing less than incredible. Let’s not forget his spectacular putback dunk that set the crowd and announcers in a near-frenzy. While the Nets certainly did not play their best basketball, Durant provided a breath of fresh air to each and every hopeful fan watching.

The challenging aspect of Durant’s great playing will be maintaining it. With the team increasingly relying on him for more points, assists, and rebounds, he might over-exert himself continually playing these 35+ minute games. However, with James Harden seemingly making a return to his typical playstyle, there shouldn’t be much to worry about. Harden’s long-awaited return and Mills’ developing fit with the team should (hopefully) be enough to keep the burden of ensuring victory out of Durant’s hands.

Patty Mills has Been Awakened

From his iconic sprinting layups to his precise passing, Mills pulled out all of the stops. One of the most prominent issues the Nets have faced this season has been equally sharing the load of playing time and scoring. Luckily, it seems Mills has stepped up, claiming a respectful 23 points in 34 minutes of play. Shooting 53 percent off from the field, Mills made a variety of shots: from difficult floaters to off the dribble shots. Catching fire in the fourth quarter, Mills was making no-look passes, hitting threes, and making clutch layups. He seems to be shaping into the type of player the Nets desperately need at this point in the season: one that can provide them with points, assists, and lead the court in transition. As he continues to further develop into his role with the Nets, more fans will see Mills as an essential player to the team’s success rather than an occasional “good game.” With Irving absent, the team has lost its fire and engagement. Friday night, Mills gave us a few sparks; we can only hope that with a fully collected Harden these sparks can reignite the fire the Nets once had.

While not the prettiest, tonight’s game was a good showing of both Durant’s continued domination and Mills’ evolving role within the team.

Facing off against the competitive, number two ranked Chicago Bulls tomorrow, Harden and Mills will be tested in their ability to maintain high levels of performance multiple nights in a row, as done earlier in their successful careers.