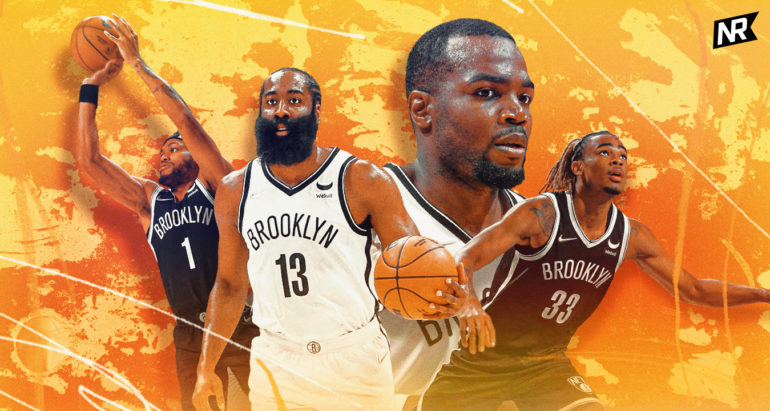 First, I want to start with a quick apology. Well, more of a vow. I haven’t been as consistent as I’ve wanted to be with coverage of Brooklyn Nets basketball this season. Part of it has been an increased interest around the NBA, writing about other teams and players, and part of it has simply been a time crunch. But with so much of the talk around this Nets team having to do with anything but basketball, and, despite parts of three seasons having passed since the “clean sweep,” there is still a dearth of film-focused Nets content out there. Fans deserve more. The good news is that we still have three-quarters of the regular season left, and plenty of storylines yet to unfold. So let’s get to it by previewing the upcoming four-game road trip that will take the Nets through Texas, Atlanta, and Detroit.

It comes after a rollercoaster weekend that saw Brooklyn split a back-to-back vs. the Minnesota Timberwolves and the Chicago Bulls. However, Brooklyn performed much better in its loss vs. the Bulls than in its win over Minnesota. Had Anthony Edwards or D’Angelo Russell played a decent game, or Karl-Anthony Towns been available, Brooklyn likely goes 0-2. Then again, the same could be said for James Harden and Kevin Durant the following night vs. the Bulls.

While yet another loss to a good team, and the manner in which they lost stings, take some solace: Saturday night was far and away Brooklyn’s best performance against a fellow contender this season. And certainly something to build on looking forward. With that being said, here’s what to look for over this next week.

Nic Claxton’s three total minutes were the most predictable part of the Nets’ weekend. Brooklyn continued its practice of being notoriously cautious easing players back into game rhythm (well, unless you’re James Harden in the playoffs). It would be unfair to say Claxton has disappointed this year, considering his health has been a consistent issue—he missed 17 straight games due to an undisclosed non-COVID illness. And it’s early. But Clax taking a leap this season certainly played into the roster construction and, for plenty of reasons, he hasn’t yet. Depending on how generous we are with 34 year-old James Johnson, Clax is the only big man on the roster fully capable of switching everything on defense, and the only true rim-roller.

But he has to earn it, and depending on how his conditioning is, this road trip represents a great opportunity for him to do just that. There will need to be less sequences like this, though:

First, he whiffs on a screen, allowing the Wolves to send two to Harden and recover easily. Then, a blown coverage with Cam Thomas results in an open three on defense, followed by a roll into a spot where Bembry is already standing. Shortly after those three straight possessions, he was subbed out.

Look, not all of that is his fault. Opponents will exploit Cam and Clax in screening actions as much as possible if they are on the court together. Neither have been the most vocal communicators on D in their brief careers thus far. And the last play is a fine roll, it’s just that DeAndre’ Bembry is essentially a non-shooter. Claxton can’t control that.

But that’s been the issue so far, a mix of his own faults and roster construction (and yes, health). Playing him with any other non-shooter is a tough ask for the Nets offense. But the screening has been an issue since he entered the league, and the lack of progress there is starting to get worrisome. He’s not going to be able to take advantage of his physical traits as a play-finisher if he keeps whiffing on screens. If he has an opportunity to impress on this road trip, he better take it, because…

…is looming. Not that you can’t play Clax and Millsap together (if the other three guys can shoot, that is). But in single-big lineups with Bembry or Bruce Brown, Millsap is making a strong case as that guy off the bench. He had his best stretch of the year over the weekend, particularly vs. a strong team in Chicago.

And it wasn’t just that he hit a three, or ducked in for a couple post-ups vs. mismatches. We knew that his offensive game was the most polished of any Nets big man outside of LaMarcus Aldridge, even before the season. What we didn’t know is, for a team struggling with offensive creation, how necessary that might prove.

And what is making a bigger difference between him and, say, Claxton is the fluidity he grants the Nets offensively. That’s true of his passing yes, but also his screening ability, both stationary and as a hand-off man. He opens the door for KD to walk into a wide-open three on the first play here, and the second features him bringing the ball up court and creating an open three for Patty Mills.

These look like simple plays, and to some extent, they are. But for a Nets team down Kyrie Irving and Joe Harris, they need to master the simplicities of offense and create open looks with an absence of talent. Millsap is helping them do that, as well as continuing to look more lively defending pick and rolls.

When is it not time to keep an eye on James Harden, huh? Reggie Miller will commentate Tuesday’s game vs. the Dallas Mavericks, so perhaps that is a good omen. As I mentioned, the Nets likely defeat Chicago with even an average Harden game. But it wasn’t his typical stinker. Apart from a couple odd decisions in the first half, he turned his decisiveness and aggression up. He had 14 assists and zero turnovers!

He just…missed. Over and over again. We’ll see how his burst and all that look on this road trip, but I think it’s safe to say it won’t be what it was last season, and especially not what it was in Houston. A 32 year old with a million miles on them doesn’t suddenly get springier. All eyes should be on his touch around the rim; decreased burst means those looks are going to be tougher, but for a player of his caliber, solid. This play may come to define the new Harden experience:

We’ve seen the start of that movie over and over. Tween, cross, tween cross, sizing up his defender. A blow-by, then a finish. But everything just looks 10 percent slower. He doesn’t quite get total separation, nor does he elevate that high on the finish. It’s a look he’s gotta make, but it’s not the bunny it once was.

The good news is that this new Harden is capable of creating quality looks for himself; he’s still a physical force with his strength and size. He just needs half-a-step, not a whole one. It’s the difference between one of the greatest players ever and a mere all-star. As always, I will continue to beg him to post-up more, and shoot more mid-range shots. He had a successful one of each vs. the Bulls.

There are a few areas I could end with. The Nets rebounding was abysmal vs. Minnesota and awesome vs. Chicago. Which version of them on the glass shows up will certainly swing a game on this trip. Cam Thomas continuing to get minutes and, hopefully, more touches matters too. Why play him if his best skills aren’t going to be utilized? It is nice to see him taking catch-and-shoot threes, though.

But I want to end with Bruce Brown. Since returning from his hamstring injury, something just isn’t right. The defense isn’t at that monstrous level it was in October. But the finishing is—that’s just not good news.

Last year, he converted 66 percent of his chances at the rim and 48 percent from the “short midrange” as Cleaning the Glass defines it. Those numbers have cratered to 59 percent and 32 percent this season. It’s making him nearly untenable on offense, and with Bembry offering comparable production on defense, it’s fair for Bruce Brown bandwagoners to start to worry about what his role is.

Again, some of it isn’t his fault. On a team with far less shooting and floor-spacing than last year’s Nets, his role as a rover and play-finisher is in jeopardy. The alleys and canals he would soar through for easy buckets last season are mere doggy doors this season. Defenses know his shot profile by heart now: huge bunny hop floater or righty scoop layup.

On the bright side, the Harden-Brown pick-and-roll had some moments over the weekend, particularly surrounded by Millsap, Thomas, and Mills:

The spacing, the action, it works. He’s just gotta make it.

Here’s to another week of Nets basketball. Lord knows what it’ll bring, as there are at least 12 players who could legitimately break out, or see their role start to shift. One thing is for sure though, it won’t be uneventful.