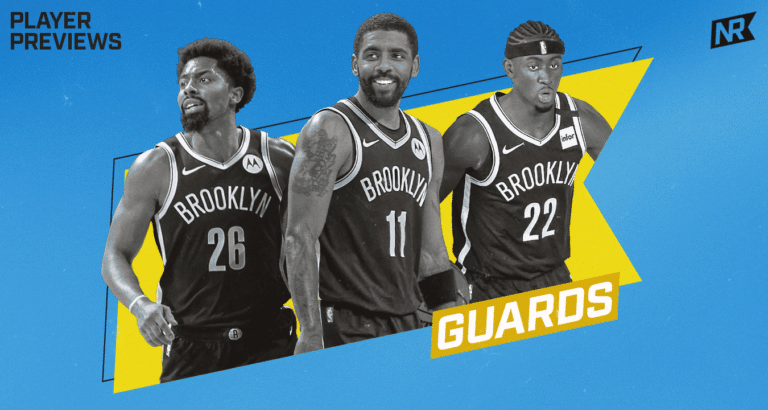 We’ve covered the big and wing spots for this Brooklyn Nets team so far; today I’ll be taking a look at what constitutes the remainder of the roster: the guards. After cutting Chris Chiozza and Elie Okobo, Brooklyn retains five players who fit into the guard category, four of whom expect to get regular minutes.

You know who he is. Forget about the extracurriculars, the Nets have their greatest point guard in franchise history active for opening night. In an injury-marred 2019-20 season, where the Duke product only appeared in 20 games, Kyrie Irving averaged 27/6/5 on 48/39/92 splits.

He figures to have the ball in his hand slightly less this year, not only with the presence of Kevin Durant but with a (hopefully) healthy Caris LeVert as well. Yet, his numbers are unlikely to take much of a dip. “Uncle Drew” taking his man 1-on-1 is always a high-level possession for his team; however, the skill that may jump out to Nets fans this year is his catch and shoot ability from deep.

On such shot attempts, Irving has not converted below a 40 percent rate since the 2016 season, as a member of the Cavaliers. When it comes to this era of dominant point guard play headlined by the ridiculous shooting ability of guys like Damian Lillard and Steph Curry, Irving often gets lost in the shuffle. But he boasts a career 39 percent three-point success rate, with the majority of those attempts coming off the dribble. It is no exaggeration to say Kyrie Irving is a historically great NBA shooter.

Another important factor that should excite fans about Irving’s potential on this Nets team is his age. He’s entering his age-28 season, despite already being a 10-year veteran. This, in addition to coming off a season that was light on his legs, means the 2020-21 version of Irving should be the best we’ve seen yet. Head Coach Steve Nash has noted Irving’s explosiveness and burst multiple times in interviews during the preseason.

There is no shortage of reasons to feel excited about Kyrie Irving entering the season. Surely feeling some extra motivation, he was flying around the court on the defensive end in Brooklyn’s two preseason games. His teammates have been nothing short of effusive in their praise of Irving’s leadership ability. An All-NBA team selection is well within reach for Kyrie; there’s nothing left to do but play.

Spencer Dinwiddie seems prepared to occupy the other starting guard spot for Brooklyn this season. That off-guard spot, alongside Kyrie Irving, was a major point of discussion for the Nets and their fans leading up to the season’s beginning. But for now, it’s Dinwiddie’s position to lose, and his job security seems high. And for good reason. Dinwiddie and Joe Harris were the two shining stars for a middling Nets team last season, at least pre-Bubble.

In his fourth year in Brooklyn, Dinwiddie generated All-Star buzz and was the only member of the guard trio to maintain his health from October to March. His shooting splits took a hit, but that’s large because he was the sole source of offensive creation for Brooklyn for long stretches of the season.

His year ended before the Orlando bubble due to a COVID diagnosis, but he enters his contract year* set up to be a major contributor on a title contender (*Dinwiddie has a player option for next season).

It’s early, but I’m high on his fit as a member of the starting unit. Dinwiddie possesses a singular skillset on the Nets, with his ability to fly from north to south. Irving, Caris LeVert, and even Kevin Durant, to some extent, are half-court maestros. All three, especially the two superstars, can initiate a one-man fast-break, but they’re at their best manipulating a set defense. At least relative to the skillsets of other NBA players.

Dinwiddie, while certainly a plus in the half-court, is at his best attacking in transition. Last year, and again, the lack of talent around him played a part in this, he would often settle for tough step-back threes or force passes in bogged down situations. But he’s 6-foot-5 with a 6-foot-9 wingspan with a tight handle. Dinwiddie has the ability to finish with both hands and possesses a nasty euro-step. You do not want that coming at you in transition.

Simply put, he adds another yet another dimension to Brooklyn’s offense with the starters. If he gets a rebound, he can push the floor and set up teammates. There was a moment in the preseason contest with the Celtics, where, after a long rebound, Boston found themselves scrambling to locate Kyrie Irving and KD. Smart decision. Except, Grant Williams ended up cross-matched with Spencer.

That type of thing should happen all year long with Dinwiddie in the starting lineup. He looked a little too passive in the preseason at times, eager to get his teammates involved before looking for his own shot. But that happens all the time when a new team comes together. His unselfish habits looked like a result of overthinking. If/when Dinwiddie starts playing freely alongside the rest of his supremely talented Nets teammates, he’s in line to have a stellar year, even if his counting stats take a hit.

Caris LeVert, one of the secondary stars of The Bubble, is positioned to lead Brooklyn’s second unit in 2020-21. That role figures to mirror, somewhat, his responsibilities for the #BubbleNets, where he served as the primary offensive creator when he was on the floor. His usage rate skyrocketed, as did defenses’ attention on him. LeVert used many Jarrett Allen screens, and they further developed their two-man game with Joe Harris roaming the perimeter.

Hopefully, we see that three-man combination this year, although Harris figures to be starting. A unit anchored by those three, who have all been a part of the Nets organization for multiple years now, will run other squads’ benches off the floor.

LeVert should be able to maximize his talent leading the second unit, operating as the primary ball-handler. However, his three-point stroke and overall feel off the catch have clearly taken a leap over the past two years; he should have ample playing time alongside one or both of Kyrie and KD this season. If he performs well, that trio could see burn in the postseason.

Ultimately, that will be what the regular season is for these Nets. Lock up a playoff berth early, and make it a high speed, sure. But more importantly, Steve Nash and the rest of his coaching staff have to find out what lineup combinations work in what situations, and where players are most comfortable. Caris LeVert is an interesting case and may have the most variability of any Net on the roster. If he’s starting by May, it wouldn’t be a shock. Nobody should be surprised if he contends for Sixth Man of the Year.

LeVert, leading the bench mob, will start plays and create offense for others. When he plays with members of the starting unit, he’ll be expected to finish plays. Manu Ginóbili, who Nash recently mentioned when discussing LeVert’s role on the team, was elite at playing with either mindset. It remains to be seen whether the 26-year-old can replicate that style and mindset. If he can, he represents yet another offensive dynamo Brooklyn can lean on.

Brought over in a three-team trade that sent Luke Kennard to the Clippers, Shamet brings shooting and high energy to a Nets team that will welcome him with open arms. Shamet is not just a standstill sniper either; he’s a movement shooter. Run him off pin-downs, flare screens, what have you, he’s a threat to catch, fire, and make. His three NBA head coaches thus far have all praised his character and work ethic. His effort level is apparent when he’s on the floor.

That alone keeps him at an at least average level on defense, on his worst nights. At 6-foot-4 and a shade under 200 pounds, Shamet doesn’t have the physical tools of some of his counterparts. There’s obvious room for growth, and he’s no weak link on that end; disregard the small, wiry sharpshooter stereotype.

He’ll come off the bench for Brooklyn, and if the preseason is any indication, 20 minutes a night might be his sweet spot. If he’s one-of-five from deep, maybe less. If he’s four-of-seven, maybe more. That’s the luxury of this Brooklyn squad: depth. Shamet perfectly exemplifies that. He’s a more-than-solid rotational piece that is capable of a big playoff moment. He’s liable to have a random 18 points in a closeout game in the conference semifinals.

Shamet can definitely work on finishing through contact at the basket, and he “only” shot 37.5 percent from beyond last season. I know he holds himself to a higher standard and would love to eclipse that 40 percent mark. But, above all, he’s a capital D dawg, and Nets fans will grow to love him. I’d say he was worth Dzanan Musa and a couple of draft picks.

Tyler Johnson was a late addition to the #BubbleNets squad but he performed admirably there. He shot well from deep, and especially well from the mid-range. The lefty loves finishing with his strong hand, and he is a reliable team passer and cutter. Defensively, he’s probably a zero right now. He won’t kill you on that end but it remains to be seen if he actually brings anything to the table.

He’s the one guard left on the roster that likely won’t be a key contributor, barring injuries, this season. However, he could see spot minutes, especially when the Nets are load managing key contributors. By all accounts, he’s a terrific teammate and competitor, as evidenced by his play down in The Bubble, and the Nets shouldn’t see a steep decline in production when he enters the game. Tyler Johnson is an NBA player. That’s more than a lot of teams can say about their 12th or 13th rotation guy.