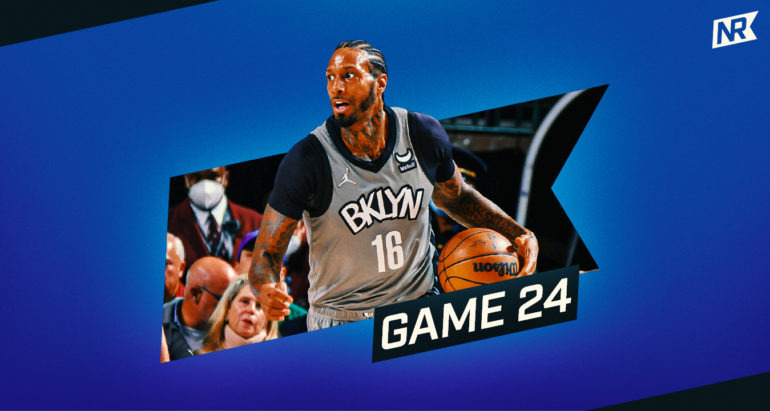 Following a tough loss at home Saturday against the Chicago Bulls, the Brooklyn Nets hit the road for a brief four-game road trip. The first stop was in Dallas on Tuesday to take on Luka Doncic and the Mavericks. And for the first three quarters, the Nets appeared to be stuck in the mud as they just could not find a solid rhythm offensively and had multiple defensive collapses.

Kevin Durant (24 points) and James Harden (23 points, 9 rebounds, 12 assists) would each struggle from the field in the first half but would be instrumental in Brooklyn’s comeback effort.

After going down by as many as 17 points in the third quarter, the Nets finally woke up. They’d use a 10-2 run to start the fourth quarter to jumpstart offensively. They also put the hammer down on the defensive end, stifling Dallas’ offensive and frustrating its stars. A KD dagger jumper coupled with an impressive final possession on defense is ultimately what led to Brooklyn sneaking out of Dallas with a win.

Here are the two key takeaways from Brooklyn’s 102–99 victory:

It wasn’t a career night by any stretch for Nic Claxton but it was easily one of his better performances, at least for this year. After missing 17 games due to an undisclosed non-COVID illness, Claxton has seen some brief minutes since returning to the lineup. The 21 minutes of game time Claxton saw against the Mavericks were the most he’s played since opening night against the Bucks. And he made use of every one of those minutes. Although he did commit four fouls, he still pulled down nine boards and poured in six points. His athleticism and rolling ability were on display as Harden found Claxton for an alley-oop off a pick and roll, mere seconds after Claxton had checked into the game.

Claxton’s biggest contributions were on the defensive side of the ball. The Nets have desperately missed his switching ability on defense, and it was apparent. Claxton did a phenomenal job whenever he was switched onto guards especially Luka Doncic. In fact, he and Luka got into a verbal exchange which led to Doncic picking up a technical foul. However, the best moment came on the game’s final possession as Claxton forced Luka into a 30-foot contested heave (Luka can make those though) and then, after Dallas got the offensive rebound, worked in perfect tandem with Bruce Brown to make sure neither Luka nor Kristaps Porzingis got off a clean look. This ultimately led to Tim Hardaway Jr. having to take the last shot.

Games like this are why Nets fans are so high on Claxton. Even though he showed a bit of rust on the offensive side of the ball his defense hasn’t appeared to have lost a step. Not only does his ability to guard 1–5 on defense help the Nets but also his skill set on offense. Without his presence in the lineup, the Nets had been missing that rim-running lob threat. Claxton’s ability to set a screen and dive to the basket for a potential lob is key for spacing and opening up the floor especially with the absence of Joe Harris. It just gives this Brooklyn offense, which has been stagnant for most of the season, another avenue to traverse in terms of scoring points.

The age-old saying of “offense sells tickets, defense wins games” is something Nets fans are familiar with. Last season’s defensive woes were well documented but were offset by an ungodly offensive attack. This season, however, without the juggernaut offense to rely on due to Kyrie Irving’s absence and James Harden still finding himself, the Nets have had to lean on their defense to win some games. And Tuesday’s contest against the Mavericks was yet another example.

To be frank it was an ugly game throughout for both teams. Even though the two squads would shoot 50 percent or better from the field in the first half it certainly didn’t feel that way as there was barely any game flow. The Mavericks shot an abysmal 9–for–46 from three-point range, which was a big reason for their offensive woes in the second half and what allowed the Nets to dominate the boards (50–39). After allowing 62 points in the first half, the Nets defense allowed just 37 in the second, and only surrendered 13 points in the fourth quarter. Dallas shot 3–for–16 in the final quarter with two of their field goals coming from Luka Doncic.

Yes, Dallas missed a ton of shots but Brooklyn’s intensity on the defensive end picked up as well. Kevin Durant and James Harden each had a block in the fourth. Harden made a great strip that, originally called a foul, was overturned. The biggest bright spot for the defense as mentioned earlier was Nic Claxton who did not shy away from the moment at all.

Kudos also have to be given to head coach Steve Nash who, after witnessing LaMarcus Aldridge get absolutely shredded on switches in the first half, went to a more versatile defensive lineup down the stretch, which is ultimately what won the game for Brooklyn. The Nets are now 8–0 this season when holding opponents under 100 points