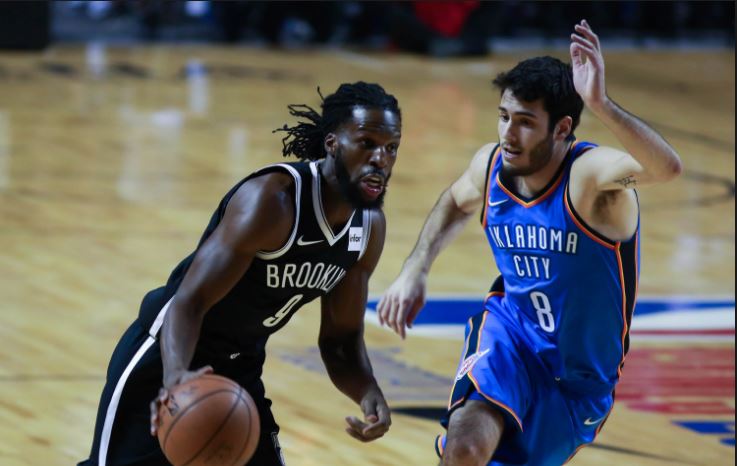 ¡Hola! The Brooklyn Nets kicked off the NBA’s 2017-18 initiative to cultivate a more passionate basketball fanbase with a 100-95 victory in Mexico City Arena. Although the Nets played el primer partido of the post-Trevor Booker era, Coach Atkinson went ten deep in the rotation as usual and trusted the process after the Nets went down as much as 16 points in a truly heinous first quarter. The notoriously high altitude of Mexico City likely also heavily influenced Atkinson’s decision to not shorten the rotation despite Booker’s sudden absence from a competitive game.

Caris LeVert comfortably had the best game of his infant NBA career Thursday night. Heck, it might be the best night for any LeVert since Caris’s cousins of the band LeVert found out their single “Casanova” hit the Billboard Top 10 back in 1987. And the LeVerts definitely enjoyed themselves during that poppin’ new swing era so that’s definitely saying something.

Starting point guard Spencer Dinwiddie had to hit the pine early in the 1st quarter due to two boneheaded fouls on Russell Westbrook’s 30 percent successful midrange pull-ups. That forced Atkinson to play LeVert as lead ballhandler against the starters of the second ranked Oklahoma City Thunder defense and especially match up against the NBA’s reigning MVP, Russell Westbrook. However, not only did LeVert hold his own in the matchup, but he thrived in exploiting OKC’s poor discipline on both ends in an impressively mature performance.

LeVert recorded 21 points, 5 rebounds, and 10 assists in 30 minutes off the bench. Four of those 21 points came at the charity stripe via OKC’s intentional fouls to extend the game in crunchtime. Yet, LeVert displayed amazing self-confidence. Not only did LeVert want the ball for those crunchtime free throws, but he also cooly knocked down all four of them despite being a sub-65 percent free throw shooter. Confidence truly defined Caris’s night. Although he did not present many wow plays (barring maybe a few impressive defensive possessions guarding Westbrook in isolation), he did trust his on-court intelligence to time his passes perfectly, push in transition when the opportunity arose, and provide direly needed shots at the rim with Dinwiddian patience.

Tyler Zeller produced a subtly strong outing in Mexico City, despite an on-paper mismatch against the rugged Steven Adams. The less renowned Zeller brother battled for 11 points and 8 rebounds in 20 game minutes. Zeller remains quite easy for other seven-footers to push around in the paint but he has regained his finishing touch this season and still offers important mobility and shooting threats outside of the paint.

Those latter two traits of mobility and threatening shooting may make Zeller Atkinson’s preferred center for the near future. Even after former number two overall pick Jahlil Okafor arrives in Brooklyn from the Trevor Booker trade. Atkinson preaches spacing, ball movement, and player movement in his strategies and Okafor’s skill set currently fulfills none of those three tenets.

That said, if Okafor as a Net proves his low post acumen and improved defensive energy and awareness deserves more playing time, Atkinson should be willing to adjust his game plan to accommodate Okafor’s still tantalizing skill level. However, odds are it will be Okafor who has to prove he can fit in as a Net starting from the ground up rather than Brooklyn acquiescing to him. Tyler Zeller’s solid play as a 20 minute a game center this season has given Atkinson this option.

The Brooklyn Nets remain in Mexico City with another match up on tap for Saturday, December 9th versus the Miami Heat at 6:00PM EST.