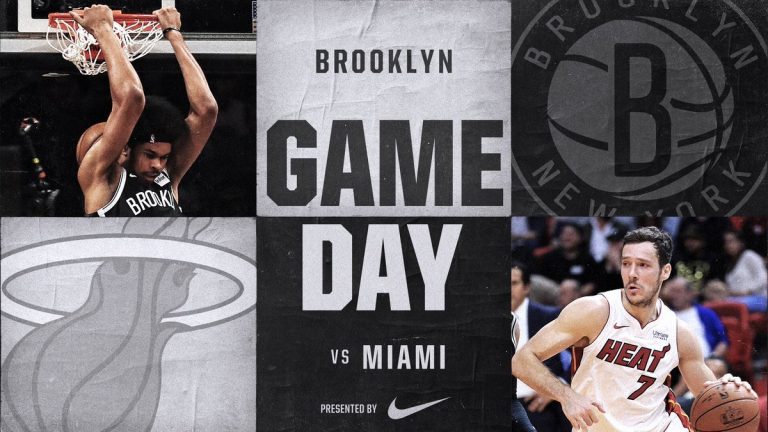 ¡Hola Miami! The Brooklyn Nets play their second (and final) game in Mexico City on Saturday night against the Miami Heat. Mexico City has treated the Nets well so far, as Brooklyn came out with a tremendous win against the Thunder on Thursday night. This helped the Nets notch their first consecutive victories of the season since their second and third games of the year.

Meanwhile, the Heat are on a two-game losing streak. To their credit, they faced a couple of near-impossible Western Conference opponents in the Golden State Warriors and San Antonio Spurs. That is not an easy task to say the least, and Brooklyn is a foe that is more along the lines of a reasonable matchup for Miami. In the East’s standings, the Nets rank at 11th place and are just one game behind the Heat.

Both teams have their fair share of injuries, with the Heat missing Hassan Whiteside, Okaro White and Rodney McGruder. However, due to the Nets’ recent moves and similarly to the contest against Oklahoma City, Brooklyn will be shorthanded once again. Sean Kilpatrick and Trevor Booker are gone in moves related to the trade for Jahlil Okafor and Nik Stauskas, though Okafor and Stauskas will be joining the Nets back in Brooklyn.

To counter the deficit in players, ahead of the matchup against Miami, the Nets recalled Isaiah Whitehead from the G League. It will be interesting to see how many minutes the Nets give him. Even a little playing time could ease the workload for the Nets’ wings — DeMarre Carroll, Rondae Hollis-Jefferson, Allen Crabbe and Caris LeVert — who were all on the court for more than 30 minutes against the Thunder.

Interesting to note: Yakuba Ouattara, on a two-way contract with the Nets, was also on Brooklyn’s bench on Thursday, but did not play due to a leg injury. (He has only played one game with Long Island this season — November 4 against the Fort Wayne Mad Ants.)

Watch for the Three Ball

Chance of snow in Brooklyn on Saturday: 100 percent. Chance of a three-point party in Mexico City on Saturday: around the same. The Nets and Heat rank second and third in the league, respectively, in three-point attempts per game. Miami has a very slight edge in three-point percentage — 36.7 percent compared to Brooklyn’s 35.1 percent, though that puts the Heat 10 places higher in NBA rankings.

One familiar face, Wayne Ellington, is one of Miami’s most lethal shooters from downtown. Ellington, who spent the 2015-16 season with the Nets, is knocking down triples at a 41.1 percent clip in Miami this season. Goran Dragic follows him with a 40 percent clip. The rest of the players on the team who are averaging at least one three-point attempt per game also shoot higher than 30 percent.

As for the Nets… well, everyone has attempted a three at some point this year. They have far more players in the 20 to 30 percent range than the Heat, but most of these guys have been missing or are gone (Booker, Whitehead, Kilpatrick, Russell).

Caris LeVert, who also falls into that list of players, was still not remarkable from long distance on Thursday. But, he had an extraordinary game nevertheless. The Michigan product scored a career-high 21 points on 6-of-10 shooting from the field and was impressive across the stat sheet: five rebounds, 10 assists, two steals, two blocks, zero turnovers. (Yes, he has been running the point, too.) Look out to see how he will fare against the likes of Dragic and Waiters.