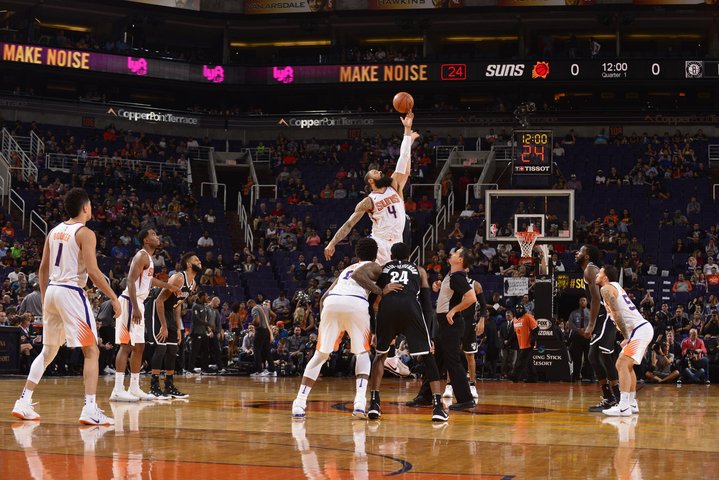 PHOENIX, AZ - NOVEMBER 6: The Phoenix Suns and the Brooklyn Nets tip off on November 6, 2017 at Talking Stick Resort Arena in Phoenix, Arizona. NOTE TO USER: User expressly acknowledges and agrees that, by downloading and or using this photograph, user is consenting to the terms and conditions of the Getty Images License Agreement. Mandatory Copyright Notice: Copyright 2017 NBAE (Photo by Barry Gossage/NBAE via Getty Images)
Home
Brooklyn Nets
Brooklyn Nets Game Threads
Sandy Mui

The Brooklyn Nets snagged their first road win of the season on Monday night against the Phoenix Suns. Quite a relief for a team that was on the first half of a back-to-back and on the midst of extending its losing streak to four.

A common unsung hero emerged as one of the saviors in this rather grueling, gritty matchup. That, and much more happened to eliminate the Nets’ Monday blues.

Joey Buckets has lived up to his nickname all season, and Monday night was no different. The shooting guard finished with 18 points on 7-of-13 shooting from the field and 3-of-7 shooting from behind the arc. 14 points came in the first half.

One should note what he is notorious for — his three-point shooting — but the 26-year-old also had an impressive, SportsCenter Top 10-worthy moment. In the final minute of the first quarter, Caris LeVert tossed the ball cross-court to Quincy Acy, who then handed it to Harris. With two Suns just standing under the basket and a looming Alex Len close by, Harris showed no hesitation in attacking and finished a wild circus layup. It was just a beautiful play in transition overall; shoutout to Harris and all the other Nets involved:

D’Angelo Russell heated up when he was needed the most

D’Angelo Russell shared Player of the Game honors with Joe Harris, and for good reason. Russell was unequivocally the key to the ignition that kept the Nets afloat in the fourth quarter. When he checked into the game for Harris three minutes into the fourth, the Suns had just taken a 75-74 lead. The former No. 2 pick immediately began his “The Time is N:OW” rampage, doing a little of everything: scoring, rebounding, assisting and stealing. 13 of his 23 points came in the final nine minutes, as well as three assists, three rebounds and one steal. There were some delightful finishes, including this “sky hook”:

He could not get his “revenge” game against the Lakers on Friday, but this performance was just as good as any (h/t @BillyKing011016).

If I had a dollar for every time a whistle was blown against the Nets, I would be able to buy myself a pretty decent dinner. A total of 30 fouls were called on the Nets, with the most ridiculous scene coming less than two and a half minutes into the fourth quarter. Spencer Dinwiddie picked up his first two fouls just three seconds apart, and one foul on DeMarre Carroll and two on Timofey Mozgov followed. Those were Mozgov’s fifth and sixth personal fouls respectively, so he fouled out. Yeah, not a pretty night in the foul trouble department, but it was not for Phoenix either. The Suns finished the night with 29 personal fouls, only one less than the Nets as a team.

Fouls were not the only ugly aspect of the game; there were, of course, multiple stretches where both teams could not score. Overall, the matchup was not pretty, and there were a couple of instances of Nets taking hits, on top of the fouls and dysfunctional basketball moments already.

At halftime, Rondae Hollis-Jefferson had to be helped to the locker room by Quincy Acy, and he did not return after being diagnosed with a right hip contusion. One questionable call also occurred with a little less than five minutes left in the first half. Suns center Alex Len was heading toward the baseline to inbound the ball and bumped his hip into D’Angelo Russell, who was still behind the basket after finishing on a layup. No foul was called on either side, but a delay of game warning was issued to the Nets.

D'Angelo Russell makes the tough bucket inside and gets hip-checked by Alex Len 😒 pic.twitter.com/I0Y8NmoGut

The Nets’ bench had some changes, but still dominated

Brooklyn has relied heavily on its reserves this season, and it comes as no surprise that they were dominant once again in this matchup. Without a doubt powered by Harris, the Nets’ reserves finished with a 40-31 advantage in comparison to the Suns’ bench. That is not near their usual average of 47.6 points per game (which ranks first in the league), but is still impressive, considering lineup changes and missing players.

One noticeable difference in this game was Caris LeVert coming off the bench. Prior, LeVert was not a starter in only Brooklyn’s first two games, but he has undeniably been struggling. His shooting woes continued Monday night, as he finished with four points on 2-of-8 shooting from the field and missed both of his three-point attempts. Meanwhile, Allen Crabbe was bumped up to the starting shooting guard spot.

The Nets also did not have Trevor Booker, who did not play due to a sore lower back. Behind Crabbe (who has come off the bench for most of the season), Booker is the Nets’ second leading scorer on the bench unit.

In a nutshell, some usual firepower was missing in Brooklyn’s reserves, but the Nets managed to hold the edge in that category as well. They have Harris and surprisingly Tyler Zeller (12 points) to thank for that.