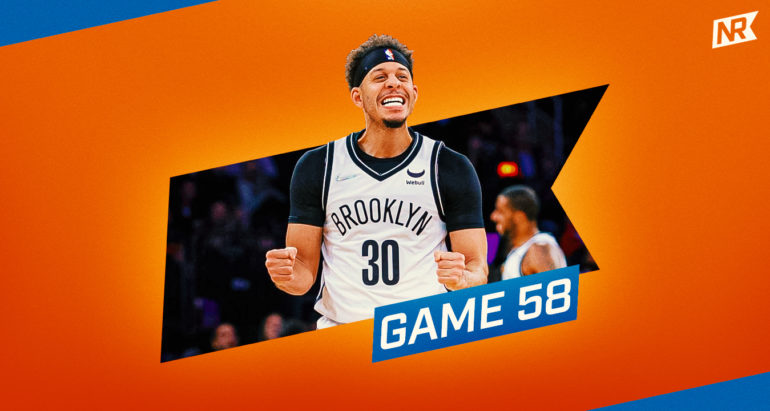 After breaking their 11-game losing streak on Monday night, the Nets were looking for something to build on. Wednesday’s game at The Garden may not have started as originally planned, but Brooklyn found a way to win in a comeback thriller, showing their grit and willpower to get the job done despite trying circumstances.

Make no mistake: This game was an ugly affair in the first half as Brooklyn looked out of sorts on both ends of the floor. New York was shooting the lights out from three-point range, making eight from distance in the first quarter alone and building a 20-point lead.

Julius Randle and rookie Quentin Grimes were unstoppable in the first half, scoring at will on an undermanned Nets team. Randle in particular was having his way, recording 20 points, six rebounds and two assists through the first two quarters.

What made things difficult for Brooklyn was its lack of shooting and poor rotations for chunks of the game. For example, Drummond, Blake Griffin and James Johnson were all on the floor at the same time at one point, which left little spacing for Patty Mills and Curry to work with.

The Knicks suffocated the Nets’ primary shooters defensively, particularly holding Curry to just six points in the first two quarters. New York hit 13 three-pointers in the first half and led 65-44 heading into the third quarter. One positive of the half for the Nets was Drummond’s presence, as he led the team with 12 rebounds in fourteen minutes of play.

However, the next quarter told a different story. Brooklyn came out firing on all cylinders, playing excellent defense and creating open looks that finally produced some points. Curry was outstanding, knocking down his shots while facilitating the offense at a high level. Within several minutes, a 20-point lead was cut to seven, and the Nets had some life. Still, the Knicks adjusted and increased their intensity to bring an 87-73 lead into the fourth quarter.

New York went on to built its lead back up to 18 points with the Nets looking tired and struggling to find a rhythm after already battling back once before. But the tides started to turn as the quarter progressed. Brooklyn’s defense made the right reads and forced New York to miss ten shots in a row during a stretch.

Meanwhile, Cam Thomas—who was quiet in the first three quarters—went on a scoring tirade, bringing the Nets back within striking distance. New York crumbled, as each possession was one-and-done, causing their lead to slip away. Brooklyn took advantage of those opportunities, successfully gaining ahold of the lead and never looking back. LaMarcus Aldridge was also clutch in the fourth, scoring 11 points in the period along with eight rebounds.

The Nets led 106-103 with under 20 seconds left with the ball in their hands. Thomas worked his way down the floor, put a move on his defender and buried a triple right in Grimes’ face, icing the game. After being down by as many as 28 points, Thomas and Curry led Brooklyn back, shocking the entire Madison Square Garden crowd.

For the first time since mid-January, the Nets won back-to-back games—and they accomplished it without Kevin Durant, James Harden, Kyrie Irving or Ben Simmons.

Fans never know what to expect out of the bold Nets rookie, and Wednesday night was a prime example of that. After struggling for three straight quarters, Thomas put the team on his back and scored 16 in the final twelve minutes. Aside from his scoring, the rookie facilitated Brooklyn’s offense down the stretch, setting up plays for teammates such as Curry and Aldridge before ultimately knocking down the game defining three-pointer.

As the season continues, the Nets will have to rely on Thomas’ playmaking and the important role he holds coming off of the bench. With Durant and Simmons’s inevitable return on the horizon, Thomas will be relied on to consistently contribute when his name is called. There is no doubt about it: he is earning the respect of the entire organization.

What a wild night it was at The Garden. After trailing by 20+ points for large portions of the game, the Nets willed their way back into the thick of things just in time. Curry, Drummond, Thomas and Aldridge all played massive roles in the win, providing the Nets with outstanding efforts on both ends of the floor.

Drummond finished the night with 19 rebounds, even with sitting out the entire fourth quarter. His size on the glass will be a huge factor for Brooklyn moving forward. As of now, he seems to be the missing piece that was desperately needed concerning rebounds and second-chance opportunities. Curry also continues to shine, scoring 20 points (14 in the second half) while racking up six assists.

The Nets still await the full-time return of their top players, but in the meantime, they are figuring out how to win with what they have. Brooklyn has a quick turnaround against the Wizards on Thursday before an All-Star break the team hopes will bring good news for its sidelined stars.