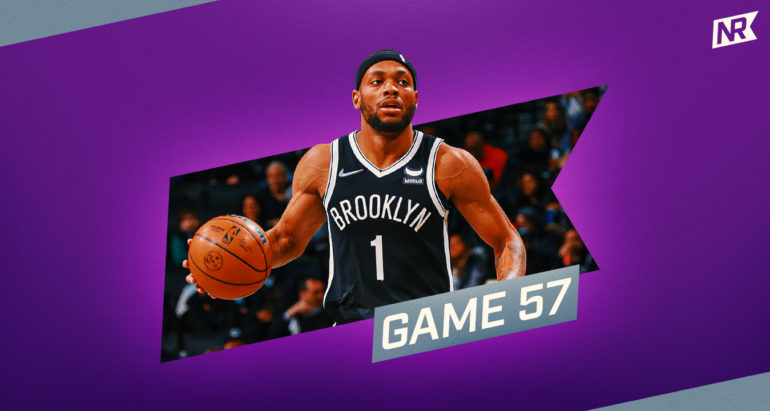 When Brooklyn previously faced off against the Sacramento Kings, the team was, quite frankly, a mess. James Harden, seemingly frustrated with the organization’s direction, wanted out. The undermanned Nets blew a double digit lead in the fourth quarter, as Kyrie Irving, Harden, and the rest of the team crumbled under the pressure.

On Monday night, the scene was wildly different than the prior matchup. Harden is now gone and Irving was out due to the game being played at home—but newly acquired members Seth Curry and Andre Drummond were present, and both joined the starting lineup. This resulted in a Brooklyn victory, its first since January 21.

Right off the bat, Curry made his presence known. In several minutes, the smooth scorer had seven points, facilitating Brooklyn’s offense immaculately. The ball movement was a thing of beauty, popping at an energetic pace, which led to wide open buckets for the Nets.

Bruce Brown, in particular, made an immediate impact. The scrappy forward scored ten quick points in the period, alongside three assists. Fueled by these performances, Brooklyn rode a double digit lead into the second quarter. As the game progressed, Sacramento went on small runs every now and then to pull within striking distance; but Brooklyn did an impressive job of maintaining their leads throughout most of the first half.

A welcome addition to the lineup was the return of LaMarcus Aldridge, who had missed a couple of weeks due to an ankle sprain. The veteran was clutch coming off of the bench, scoring 13 points in just 11 minutes. Towards the end of the quarter, sloppy play and poor shot selections allowed the Kings to chip away at Brooklyn’s lead. A 19 point deficit was cut to seven, and the Nets only led 55–48 heading into halftime.

To start the second half, the Kings continued to put pressure on Brooklyn, forcing turnovers and creating transition buckets. In less than two minutes, it was a one point game. However, that’s when Curry turned on the switch, pouring it on from downtown for Brooklyn. Drummond got several excellent looks at the rim, and just like that the Nets led 78–61. Heading into the final 12 minutes, Brooklyn held a 14 point cushion over Sacramento.

Thankfully, in contrast to what happened last time, the Nets suffocated the Kings in the final quarter. Any chance of a comeback was snuffed out by Brooklyn’s stifling defense; powered by Drummond, Brown, and Aldridge. As time trickled out during the final few minutes, the Nets rookies took over, showing no mercy. Brooklyn finally broke their 11-game losing streak, with a dominant 109–85 victory over the Kings.

It sure was fun watching both Curry and Drummond in their Brooklyn debut. The two teammates played outstanding basketball, leading the Nets on both sides of the floor to a crucial victory at home. Curry contributed in many different ways, scoring and facilitating Brooklyn’s offense at a high level. He finished the night with 23 points on 55 percent from the field, seven rebounds, and five assists. As he settles into his role alongside Kevin Durant, Kyrie Irving, and Ben Simmons, we should expect to see Curry’s full playmaking potential unlocked.

Andre Drummond was spectacular as well, providing the Nets with the big man that they desperately needed. He scored 11 points and grabbed nine boards, while racking up four assists and a monster block. All things considered, these two players bring a lot to the table for Brooklyn, and certainly improve the Nets chances at sustaining a championship run this season—and for years to come.

Is Bruce Brown Back?

Either Bruce Brown only plays well against the Sacramento Kings or maybe he finally turned the corner after a relatively disappointing season so far. Brown was unstoppable on Monday night, getting whatever he wanted at the rim, while creating opportunities for his teammates.

Without a doubt, Brown put on a show at the Barclays Center. He scored 19 points, and stuffed the stat sheets with impressive numbers: six rebounds, six assists, three blocks, and a career high five steals. If Brown can continue to contribute similar to how he did a season ago, Brooklyn will be even scarier come playoff time.

Monday night was a sneak peek into how Brooklyn will look with these new additions. Even though several pieces are still missing, it was refreshing to see how Curry and Drummond elevated the team’s overall style of play to a whole new level. The ball movement was on point, the defensive intensity was present all night long, and the bench was engaged throughout the entire game. Moving forward, fans should expect the Nets to continue to bring the good vibes night in and night out, as more help is on the way.