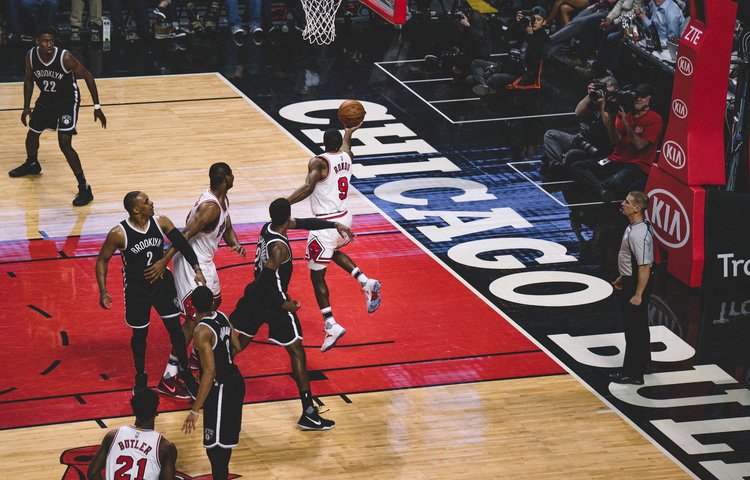 It was game number 82 in the Brooklyn Nets’ 2016-2017 season. The Nets looked to finish their up-and-down season strong against the Chicago Bulls, but without Jeremy Lin and Brook Lopez. They beat the same Chicago Bulls on Saturday afternoon, in the Nets’ Barclays Center season finale. Saturday’s game was a big come-from-behind victory for the Nets, beating a Bulls team amidst a playoff-seeding dogfight. The Nets tried to make the Bulls pay on Wednesday night.

Well…as you can see from the above scorecard, that didn’t happen. The Nets were unable to beat the Bulls on Wednesday night, losing 112-73. The game got out of hand early, with the Nets struggling to even get a clean look. Chicago seemingly was letting everything fly. In the fourth quarter, a lead around 20 points extended to nearly 40.

The Nets’ final record on the season was 20-62. It was one less win compared to last year’s 2015-2016 campaign when they finished 21-61. For the Nets, it was the first time they had back-to-back 60+ loss seasons. Although things may not have gone on as planned, the vibe around the Nets was a lot more hopeful. Interviews with Sean Marks during the YES Network broadcast showed the vision the team is intended to follow. Regardless, the Nets’ season ended on a sour, yet almost predictable note on Wednesday night.

Rest? Or evaluation? (Life without Brook-Lin)

The Nets were missing several players in Wednesday’s contest against the Chicago Bulls. Sean Kilpatrick, Joe Harris, and Quincy Acy were out with assorted injuries. Jeremy Lin, Brook Lopez, and Trevor Booker did not play, as management decided to rest the players for the game. For Nets fans, it was a look at life without Brook-Lin. The result wasn’t pretty.

The game was about more than rest for the Nets. It was a chance to get a final look at in-game action from several players whose Nets future is up in the air. Archie Goodwin, K.J. McDaniels, and Spencer Dinwiddie all have player options for next season – and all of them saw extended minutes against the Bulls.

Goodwin had the most impressive game, scoring 20 points on 7-of-11 shooting. Unfortunately, he committed five turnovers. McDaniels had a solid game, scoring 15 points and grabbing 6 rebounds. He only shot 1-of-6 from three, so that will have to improve. Dinwiddie, who had a great game last time against the Bulls, was disappointing. He only scored 5 points in 31 minutes and struggled to play the role of lead floor general for the Nets.

The first half was ugly for the Nets. The absence of Jeremy Lin and Brook Lopez likely contributed to that. They struggled right out of the gate, with a starting unit that likely has played very few minutes together. The Nets seemingly lacked effort – and looked completely out of rhythm early. That carried over for most of the first half. The Nets scored only 13 points in the first quarter – the second straight game in which the Nets failed to find offense early. On the other side, the Bulls could not be stopped.

The Nets turned the ball over several times in the first half – compounding their lack of shooting. In the first half, the Nets shot 14-43 overall from the field and 2-17 from the three-point line.

They finished the first quarter down 50-32, on pace to score 64 points (not a typo) in the game. For a team with several players filling in for a spot start, Brooklyn simply looked outmatched almost immediately after tipoff.

Caris LeVert is the future

It was the final game in LeVert’s promising rookie season. In his final game as a rookie, LeVert scored 10 points, grabbed 5 rebounds, and assisted 2 teammates’ baskets. While his box score numbers may not have been impressive, the LeVert promise was on full display. He knifed to the basket. He threw a behind-the-back pass that was way too “Flamin’ Hot Cheetos” for Rondae Hollis-Jefferson to handle.

Despite all that, the bar for CLV is high. Check out what (my 16 Wins A Ring Editor) Keith Smith has to say…

Calling it now: Caris LeVert will be a major contender for Most Improved Player when he averages close to 20 PPG next year.

Our very own Nick LeTourneau went with a deeper prediction

I'm jumping on this full board. I think he averages 18 PPG easily next season & shoots over 40% from three too https://t.co/Zqj50N1zdr

Despite the lack of draft picks, the sky is the limit for the Brooklyn Nets, and for Caris LeVert.

With the big win, the Chicago Bulls made the playoffs. It was a tense night for the team, and they played well against a depleted Net team. Their defense was cohesive, forcing several Nets turnovers. Rajon Rondo dished and drove. Jimmy Butler made some tough shots. Even Paul Zipser got in on the action, scoring a big 21 points.

The Bulls notched the eighth seed in the playoffs, and their win guaranteed their spot. The Miami Heat were eliminated, despite their post-New Year’s burst. Chicago will play the Boston Celtics in the first round of the playoffs and will look to score a major upset against the Isaiah Thomas-led team.

This is Brook-Lin.com’s final game summary of the season! Although it was a bumpy ride, thanks to all of our readers that stuck with the team for all 82 games. Even though the season may be over, there will be a lot of offseason content of every variety, from Jeremy Lin content, NBA draft content, and much, much more.

Be sure to stay tuned! There will be lots of great content on the way.