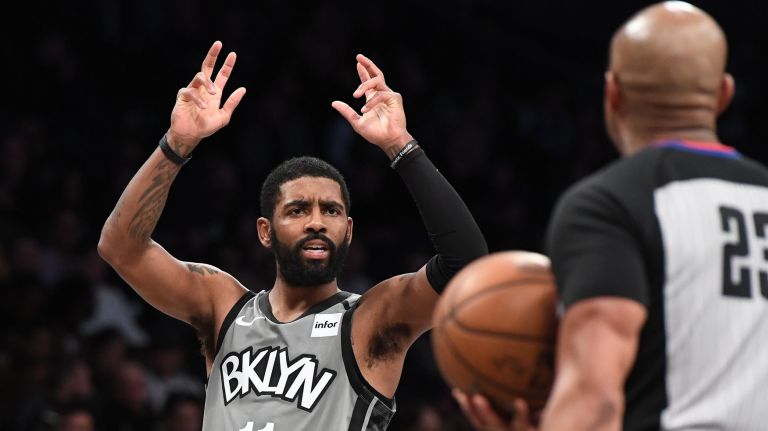 Nets Fall to the Utah Jazz in Brooklyn

Kyrie Irving showcased another dominant performance but it was to no avail as the Nets fell to Utah, 107-118. Irving produced another stunning game in only his second game back: 32 points, 5 rebounds, 11 assists, 2 steals and a block. For the Jazz Rudy Gobert, Donovan Mitchell and Joe Ingles combined for 74 points.

It was a back and forth start,  with both teams trading threes and scoring runs. Irving and Dinwiddie showed some nice chemistry playing on and off the ball in the first.

The Nets adjusted to Gobert’s presence by taking, and hitting, more mid range jumpers and floaters.  Off the bench TLC sparked things in the open court.

Spencer Dinwiddie and Rodions Kurucs continued to show their connection on cuts.

After a silly pass from Jordan to end the quarter was stolen by Mudiay, the Jazz were able to extend their margin to four at the end of the first.

Kyrie was in his bag in the second.

The highlight of the quarter was an Absolutely filthy sequence by Jarrett Allen. It started with an emphatic block on the Defensive Player of the Year, leading to an open dunk on the offensive end.

Brooklyn missed their last seven shots of the half and only attempted nine shots from the perimeter, hitting two of them. Utah on the other hand took 22 shots from the arc.

Dinwiddie continued to struggle with his free throw shooting, going 0/4 from the line in the first two quarters. An 8-0 run to end the quarter helped Utah extended their lead to 14 at the half.

The lead ballooned to 20 to start the third before a 7-0 run for Brooklyn kept them within striking distance. The Nets couldn’t cut into the lead enough to really challenge Utah. There were some highlights including some quality off ball movement from Caris LeVert.

Kyrie Irving was the key reason why the deficit didn’t blowout further in the third. He was finding his own shot and getting teammates involved as evidenced in this lovely lefty feed to Harris in the fastbreak.

Spencer was aggressive in the fourth, attacking the rim at will which trimmed Utah’s lead to 9.

The Nets fought it out but couldn’t get enough stops on the defensive end (or hit their threes) to trim the deficit to anything more than 9. The team will need to step up to support the talents and output of Kyrie if they are to get back on the winner’s list against Philadelphia.