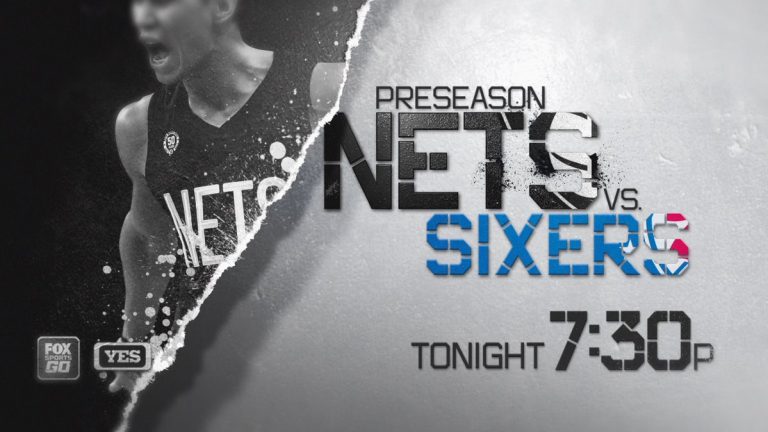 After an impressive 3-0 start to the preseason, the Brooklyn Nets close out their preseason slate against the Philadelphia 76ers. The finale will be played in the Long Island Nets’ stadium in Uniondale.

Given their prior preseason records, this game would appear to be an easy Nets win. However, Joel Embiid is currently listed as probable for this game and is expected to play. If Embiid does, in fact, take the court on Wednesday, this will be the most interesting preseason game for the 2017-18 Nets.

The Brooklyn Nets had some questions about their backcourt fit entering the preseason. However, the results from the early slate of games seem to be all in favor of the Jeremy Lin/D’Angelo Russell duo. Russell has led the team in scoring in two of the team’s three games–and Lin led the team in scoring in the other game. Lin shot poorly in both games against the Knicks, but made up for it with canny passing and creating opportunities by driving to the rim.

The Sixers, on the other hand, entered the preseason with a seemingly solid guard slate that has crumbled since the start of the preseason. Ben Simmons has been impressive as the starting point guard, but Markelle Fultz struggled throughout the preseason and is not expected to play on Long Island. Jerryd Bayless is a decent fill-in option, but he will be outmatched against either Lin or Russell.

The Nets seem to have solidified their starting frontcourt heading into their last preseason game. DeMarre Carroll and Rondae Hollis-Jefferson appear to be the starting forwards, with Timofey Mozgov in a low-minutes starting role. While Caris LeVert will push for a starting role in the frontcourt this season, the team will likely opt to be careful in bringing him back from his ankle injury. Expect him to play around 18-20 minutes in this game as he did in their last game against the Knicks.

However, the Nets frontcourt will not be as interesting to watch as their opponent’s group for this game. That interest centers around the newly minted $148 million man.

Joel Embiid has every tool that a center needs to be successful in the modern NBA. He dramatically improved Philadelphia’s defense during every minute he played last season, and his offensive skill set has grown at a truly stunning rate since he started playing organized basketball as a teenager. Timofey Mozgov at least has the size to contest Embiid, but he is far too slow laterally to have a chance in guarding him. Kenny Atkinson may opt to go to Jarrett Allen early in this game to at least have an athletic defender on Embiid, and the Allen-Embiid minutes will be far more interesting than throwing Mozgov on Philly’s star center.

After struggling with depth throughout last season, the Nets looked to be a much deeper team entering the 2017-18 season. In spite of that, the bench has arguably still exceeded expectations in their three preseason games. Spencer Dinwiddie might not be a starting-caliber point guard, but he is a solid bench option and an excellent fit for this team. Caris LeVert will probably earn a starting spot at some point this year, but until then he will be a stellar bench player. Allen Crabbe was very impressive in his preseason debut on Sunday and is primed for a breakout year in a Brooklyn offense that can maximize his shooting touch from deep.

The Sixers, on the other hand, had limited depth even before the Markelle Fultz injury. Jahlil Okafor could feast on the interior against Brooklyn, but the rest of their bench is bereft of scoring. Both Furkan Korkmaz and Timothe Luwawu-Cabarrot have shown flashes in preseason, but not enough to indicate that they can be effective against Brooklyn’s bench.

The outcome of this game rests almost entirely in Joel Embiid’s hands. Despite the small sample size, he showed last year in his 31 games that he has the potential to be the best center in the NBA. However, he is not your prototypical young player with clear talent but limited success. The Sixers outscored opponents by 1.7 points per 100 possessions with Embiid on the floor, per basketball-reference. Without Embiid, they were outscored by 8.4 points per 100 possessions.

Joel Embiid is an incredible talent who is almost perfectly crafted to give the Nets problems. However, the other matchups in this game all favor the Nets. Rondae Hollis-Jefferson has both the size and the speed to keep up with Ben Simmons. Furthermore, the Sixers simply do not have an answer for either Brooklyn’s starting backcourt or their depth.