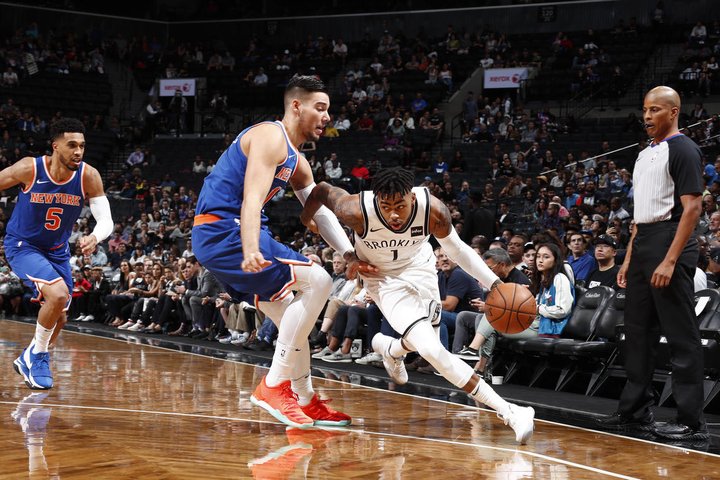 BROOKLYN, NY - OCTOBER 8: D'Angelo Russell #1 of the Brooklyn Nets handles the ball against the New York Knicks during a preseason on October 8, 2017 at Barclays Center in Brooklyn, New York. NOTE TO USER: User expressly acknowledges and agrees that, by downloading and or using this Photograph, user is consenting to the terms and conditions of the Getty Images License Agreement. Mandatory Copyright Notice: Copyright 2017 NBAE (Photo by Nathaniel S. Butler/NBAE via Getty Images)
Home
Brooklyn Nets
Brooklyn Nets Game Threads
Sandy Mui

You’re reading that score right: The Brooklyn Nets toasted the New York Knicks, 117-83. There was little competition remaining even after the first 12 minutes, with the Nets already leading by double digits, 36-24. By halftime, Brooklyn was up 59-41, and matters only got worse for the Knicks after Kristaps Porzingis exited the floor early in the third quarter with a sore right hip. Well, it may be too soon to call, but maybe this is a sign for which team is owning New York this season. “The Nets are actually not bad” and “The Nets might be better than the Knicks” were two prominent themes I saw on my timeline Sunday night.

This contest was also the first Nets game televised by YES Network this year, with Ian Eagle pulling a double shift and Sarah Kustok making her debut as a a primary game analyst. With legendary commentary back in session for Brooklyn Nets basketball, the Nets closed out another blowout win and remain undefeated in the preseason.

Newcomer Allen Crabbe came from Portland as an incredible 41.1 percent career 3-point shooter. Even more notably, last season was the 25-year-old’s best year from downtown; he shot at a remarkable 44.4 percent clip! Based on his skill-set as a player, in Nets head coach Kenny Atkinson’s 3-point centric offense, Crabbe was expected to thrive. He did not disappoint in his Nets debut.

In just 10 minutes of action, Crabbe finished with 14 points on 5-of-7 shooting from the field and 3-of-4 shooting from behind the arc. 11 of his points and all of his treys came in just six and a half minutes in the first quarter! Not to mention, he knocked down his first triple only 31 seconds after he checked into the game, and it looked silky smooth in transition.

"This is why they got me here," Allen Crabbe, probably, after hitting a 3 in transition pic.twitter.com/f5g4iZMFwD

It’s clear why the Nets coveted Crabbe for so long. After the game, Atkinson even referred to Crabbe as a “system fit.” It may have only been one game in preseason, but that does not make it any less exciting to think about what’s in store for the season. In Crabbe’s words, man it’s gon b a hell of a year.”

The Nets put on an absolute 3-point clinic against the Knicks, attempting 33 and shooting at an unbelievable 42.4 percent. Of course, with Crabbe in the rotation, he contributed the most in this category. Eight other Nets knocked down at least one trey as well, and you know it’s significant when Trevor Booker hits a “walk-off three-pointer.”  Expect more or less of the same from Brooklyn throughout the season, with the likes of Crabbe, Quincy Acy and Joe Harris serving as 3-point specialists and the likes of Timofey Mozgov and Spencer Dinwiddie developing their hot hand. Atkinson will not be putting a red light on 3-point shooting anytime soon.

Prior to the game, Atkinson commented on the Nets’ shot selection, calling it “average to below average” across the board. Perhaps it was his comments that fueled the team, but Brooklyn’s ball movement was something of beauty Sunday night. Two notable plays came in the fourth quarter, both involving D’Angelo Russell and Trevor Booker. The first one was a Russell-to-Booker-back-to-Russell interaction in transition. Just look at Russell’s and Booker’s reactions immediately afterward; these guys were definitely having fun being mischievous:

Everything about this is incredible pic.twitter.com/Af91MQ2H6T

Booker indirectly continued being generous to Russell just half a minute later. Raise your hand if you ever thought Trevor Booker would be doing behind-the-back passes. No takers? Well, it happened:

If you’re torching the Knicks, you might as well have fun with it.

Thanks in part to the Nets’ much-improved defense, the Knicks were quite sloppy with the basketball, committing 24 turnovers on the night. 35 of Brooklyn’s points came off these turnovers, so that accounted for 29.9 percent of the team’s total points. Contrast that to how poorly New York performed in this category since the Nets turned the ball over 17 times as well; the Knicks came away with only 12 points off turnovers (14.5 percent).

Atkinson had high praise for the Nets’ defense after the game, saying the team had “great activity, lots of deflections, steals, high energy.” Oh, and the defense alone was “solid.” Much of how Brooklyn’s defense would fare coming into this season was “unknown” and concerning due to the team’s lack of size, but it appears the framework is falling into place.