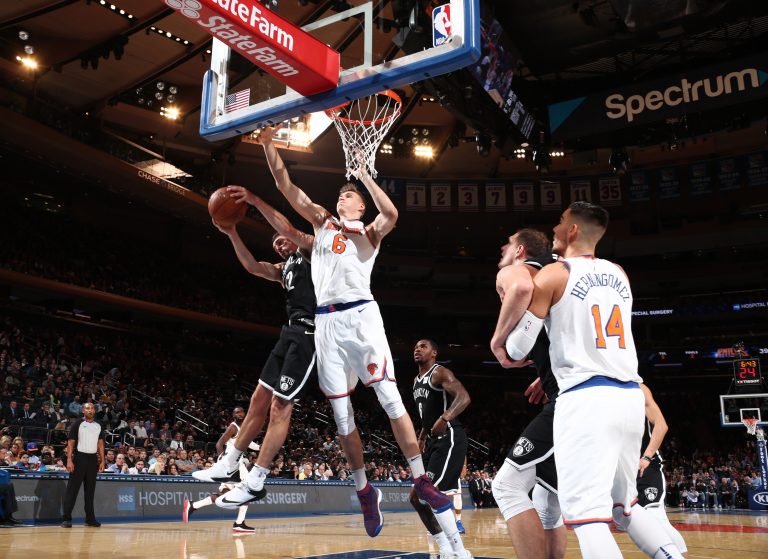 The Brooklyn Nets have already begun to turn heads in 2017-18 preseason basketball, winning their first two match-ups against Eastern Conference opponents. (Preseason means everything… right?) Even if it’s just a couple of games, a win streak sure feels good. One thing’s for certain: The Nets are blazing hot.

No pun intended, but Brooklyn sealed the deal against the Miami Heat by the time the teams hit the locker rooms at halftime (59-45). Even after the first 12 minutes, the Nets already led by double digits (33-23). The rebound differential in this match-up was absolutely ridiculous — Brooklyn had a 62-38 advantage in that category. Six Nets finished with at least five boards each — the unsurprising suspects of DeMarre Carroll (7), Rondae Hollis-Jefferson (9), Timofey Mozgov (8), Trevor Booker (8) and Jarrett Allen (5), along with Sean Kilpatrick (7). Talk about a vast upgrade from relying solely on Booker and Hollis-Jefferson last season. (Is it too soon to say we’re in for a treat this season?)

On Sunday, the Nets face the opponent they began their preseason against — the New York Knicks. Brooklyn will need to bring some of the heat it got from its last W to this one. It’s unlikely the Nets will be able to get the rebound gap as wide as they did against the Heat, with the Knicks’ loaded front-court of Kristaps Porzingis, Kyle O’Quinn and Willy Hernangomez. But, that was no issue against their cross-town rivals the first time around (Brooklyn was only one rebound short of matching New York’s total). With a size disadvantage, the Nets should look to make up for it in other areas, including one that was utterly phenomenal on Tuesday: their 3-point shooting.

The two teams’ first match-up looked like a 3-point shootout from the get-go. Brooklyn finished the game shooting at a remarkable clip of 50 percent from downtown, while New York shot at a less impressive, but still notable 40 percent clip. The game appeared to be over by the middle of the third quarter, with the Nets going up by as much as 18 points. But, with Brooklyn’s starters resting in the last period, birthday boy and notorious defender Courtney Lee helped spark a 20-9 run that allowed New York to cut the deficit to four points. Lee, who’s known for his sneakiness on the defensive end, came away with four steals in this game.

Brooklyn cannot afford to get complacent even when carrying an enormous lead. Late-game burnouts were a major concern last season for the Nets, so they’re not new to this issue. At least, in their second preseason game against the Heat, they got Miami to the point of no return, and didn’t look back.

After missing the Nets’ first two preseason games with opposite ankle injuries, sidelined wings Caris LeVert and Allen Crabbe have had plenty of time to rest and are listed as probable for this match-up. It’s astounding Brooklyn has been able to lead by such wide margins without one of its most exciting rising stars and inarguably its best 3-point shooter. Imagine how deadly the team could be once these two return and are regularly used in the Nets’ lineups. Definitely look out for them if they indeed hit the floor. With it being their first game returning, it wouldn’t be surprising if Nets head coach Kenny Atkinson opts to ease them back into his rotations, but just their presences on the court are something to look forward to.

The backcourt duo of Jeremy Lin and D’Angelo Russell also has not been in sync simultaneously yet, so keep your eye out for how they fare together on Sunday night. Lin was quiet in the first Brooklyn vs. New York match-up (eight points on 2-of-9 shooting from the field), while Russell struggled against the Heat (nine points on 4-of-14 shooting from the field). How the two work together when they’re both at their best is still a forthcoming storyline.