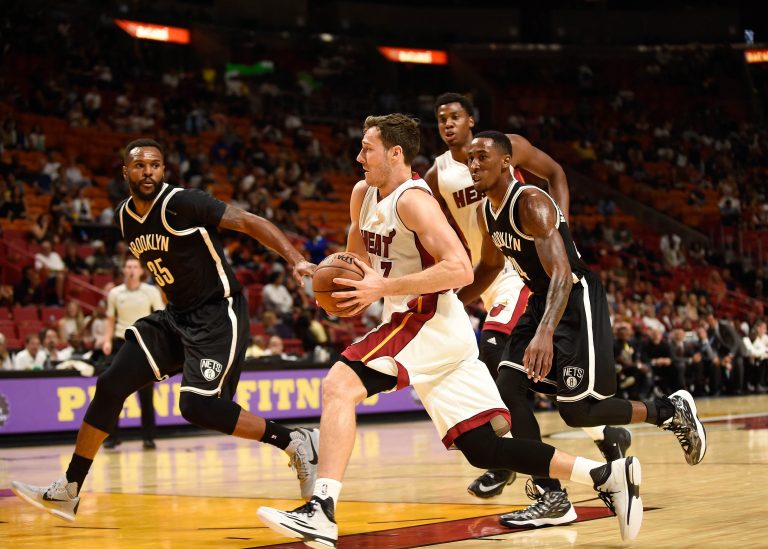 NBA basketball is finally back! The preseason is in full swing, and both the Brooklyn Nets and Miami Heat have one game under their belt as they get set to face off at the Barclays Center. Miami had their first game last Sunday. The Nets made the short trip up Manhattan to face the New York Knicks on Tuesday.

As we gear up for the contest, the battle between the starting backcourt is what’s going to grab almost all of the attention. Dragic and Waiters are the catalysts of Miami’s offense, despite looking lackluster in the opener against the Atlanta Hawks. The two combined for just 13 points on 6-of-13 shooting, but putting points on the board isn’t the Heat’s MO. It’ll be interesting to see how they fare against Brooklyn, who still don’t have much focus on the defensive end of the floor.

The Nets allowed 107 points in Tuesday’s win, but the 3-point line was an enormous weakness, and the discipline on defense isn’t there yet. New York went 10-of-25 from 3, and 25-of-31 from the charity stripe. Luckily, the Nets had enough firepower to combat it. D’Angelo Russell was the leading scorer with 19, and six other players cracked double digits: Sean Kilpatrick (15), Joe Harris (13), Rondae Hollis-Jefferson (13), Spencer Dinwiddie (12), Quincy Acy (12) and DeMarre Carroll (10).

Brooklyn’s barrage from downtown was even more violent than the Knicks’. There was no reluctance — at all. By night’s end, the Nets had launched 32 threes and connected on 16 of them. That opened up the floor and allowed everyone to play downhill, and Brooklyn poured in 23 points from the foul line.

The most prominent question is if the Nets can keep their offense hot against an elite defense like Miami’s. Whiteside and Johnson do a stellar job at keeping the paint on lock, and that allows the guards to play ultra-aggressively on the wings. Further, both Josh Richardson and Justise Winslow brought the clamps out against the Hawks.

The two young studs rejected seven shot attempts, and the Heat held Atlanta to just 90 points on 35.6 percent shooting. I know the Hawks don’t have the weapons anymore, but it was an impressive showing from the Heat, regardless.

Lastly, keep an eye on how Kenny Atkinson handles his rotations. Eight guys played more than 17 minutes on Tuesday, but it’s the combinations of players that will make things interesting. Does he go super small and put Hollis-Jefferson at the five? Does he throw out a three point guard lineup? At this stage, anything’s possible, and it’s fun to watch Atkinson tinker with different personnel.