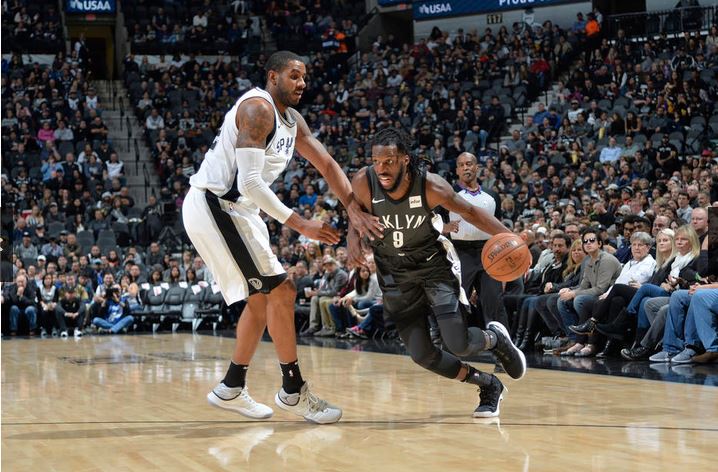 The franchise which nurtured and developed Sean Marks rolls into town to play the Brooklyn Nets tonight. Marks cut his teeth under RJ Buford and Gregg Popovich in San Antonio which remains the template for all franchises to emulate.

Although Kenny Atkinson didn’t come up via Pops coaching ranks he did indirectly if you consider his time spent with Mike Budenholzer in Atlanta. Coach Bud was the leading assistant with Pops crew for years.

San Antonio is doing what they’ve done for the past two decades – winning. While the Spurs are on pace for another 50 plus win record this season stands out for how they are doing it.

Gone are the days of Tim Duncan, Tony Parker and Manu Ginobili. Though the latter two remain on the club their roles are significantly reduced and both have spent time out with injuries. Rather, the big surprise has been the absence of MVP caliber talent Kawhi Leonard. The perennial DPOY has played in just nine games this season. Initially, Leonard remained out nursing a quad injury.  He was just starting to hit his stride when he incurred a new injury sustaining a partial tear in his shoulder muscle.

The club doesn’t consider it significant, but given Pops penchant for resting his talent and being careful, don’t expect Leonard to be logging unnecessary minutes. He’s slated to play today, but the Spurs are likely to be cautious with his playing time.

Danny Green and Patty Mills also remain from the last title winning squad, but the remainder of the roster is different. Buford has compiled a group of youngsters, vets and talent to comprise the Spurs.

Suffice to say, the Spurs embody next man up better than any team in the past two decades. So, while there will be core players to focus on the Nets need to be at their very best because Popovich’s squads play to their identity and system.

Generally speaking the Spurs are best known for their ball and player movement. I’ve often referred to the Spurs as the sports equivalent to a symphony. Watching the players in constant motion and how they make sure to keep moving the ball until the best shot opportunity presents itself has been a staple of Gregg Popovich for years.

Yet, it could be debated the Spurs defense is their true calling card. A scan through past seasons highlights how long defense has been a priority. San Antonio ranks among the top three defenses each of the past five seasons and rank second this season.

If the Brooklyn Nets want a chance to steal a victory they’ll need to be cognizant of this top defensive team and counter their defense with low turnovers combined with ball and player movement to keep the older squad moving.

Sure would be nice if Jahlil Okafor could defend. If you look at what LaMarcus Aldridge game began as and where it evolved in the old NBA that would’ve been the hopes for Okafor. But, the change to positionless players and small ball changed the dynamics and subsequently made Okafor’s assets less transferable.  That’s not to say Atkinson can’t figure out how to utilize Okafor in a reserve change of pace crew or in more pick and roll sets. But, he certainly can’t be counted on to defend Aldridge.

Jarrett Allen and Quincy Acy seem to be logical choices to try to spell the big man who is having an All-Star season.

Just cross your fingers Pops decides to make this one of his patented rest days.

Notably Gregg Popovich could throw a monkey wrench in everything because you never know when he’ll rest or play anyone on the squad whether it’s a star, everyday player or rookie.

History: The Spurs hold the all-time edge winning 69 of the 90 games between the squads. Earlier this season the Spurs won at home 109-97 and are on a five game win streak versus the Nets.

Odds: The line is off as of this posting.

Notable: Things don’t look good for the Nets because of a strange Spurs recent trend.  For the past 10 games the Spurs have been see-sawing win-loss-win-loss.  Since their last outing was a loss that means if they stay true to that trend this game would be a win.