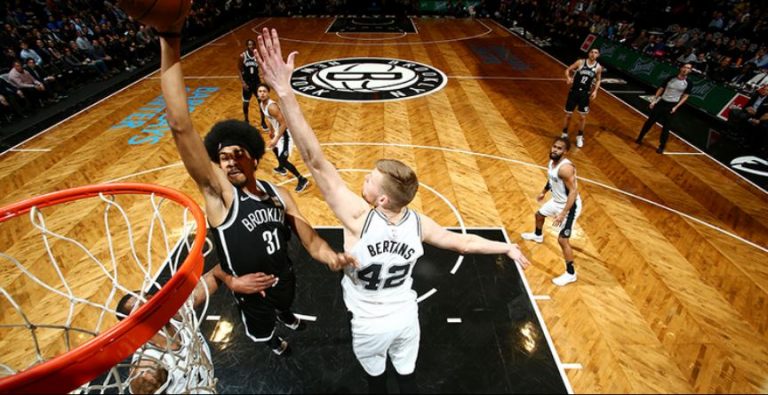 A great mid-quarter run in the fourth by Brooklyn salvaged a porous third quarter for the Nets. Yet, some inopportune free throw bricks and 34 points from the incorrigible LaMarcus Aldridge handed the Nets a 100-95 pink slip in Barclays. The Nets did not take advantage of the last minute scratching of Kawhi Leonard from the roster. Hopefully, the Nets recover for Friday and replicate another blowout victory over the visiting Miami Heat.

When Aldridge and the San Antonio death train threatened to break the game into garbage time, Allen Crabbe and Joe Harris  frequently pulled Brooklyn off the railroad tracks at the last second. Crabbe and Harris combined for 38 points and 8 of 15 from downtown. Outside of the two, the Nets limpily hit 5 of 21 from beyond the arc. Crabbe supplemented that shooting with great crashing of the defensive glass from the wings. Eight defensive rebounds for Crabbe shines well for a Nets team that has emphasized wing rebounding in recent weeks.

Crabbe and Harris’s carrying of the three-point load highlights a worry for Brooklyn. The Nets roster may not have enough potent shooters to take advantage of the Brooklyn bombs-away style. Crabbe and Harris are currently the only two Nets who have shot at least 80 threes this season and are shooting 36% or better from three. Overall, Brooklyn sits 28th in the NBA in team 3PT%.

Atkinson may need to consider playing Nik Stauskas more often to threaten defenses. As a Net, Stauskas has shot 24 of 51 from beyond the arc. That mark will obviously regress downward and Stauskas currently only sits a career 35% three point shooter. However, Stauskas never lacks for confidence in taking those threes and causes tight marking on the perimeter as a result. Requiring defenders to guard alertly on shooters is a must for the Nets with some on the Brooklyn roster seemingly wavering in that shooting confidence.

While Allen Crabbe and Joe Harris kept bailing water out of the Nets’ holey boat, Spencer Dinwiddie unfortunately kept steering the boat into icebergs. Dinwiddie entered the Spurs game shooting 37.6% from the field and 28.3% from beyond the arc in January. This 3 of 13 effort from the field did not improve upon those shooting woes. Dinwiddie did well to maintain aggressiveness attacking the rim and to dish his way to 11 assists. That ability to get into the lane and create shots keeps Spencer as still a net positive for Brooklyn, despite the January frigidity. However, the bloom is starting to droop off the rose of his breakout season.

Dinwiddie’s defense on Patty Mills throughout the game almost equaled his cold shooting in terms of ugliness. Mills stayed hyperactive off-ball to complement the dual post threats of LaMarcus Aldridge and Pau Gasol. Dinwiddie could not deal with the movement and frequently found himself a step slow to deny Mills both the ball and a following open jumper. So slow Dinwiddie fell prey to his common “fouling a jump shooter bc of a late contest” bugaboo. Mills enjoyed himself 25 points and seven made threes from his and Spencer’s efforts. 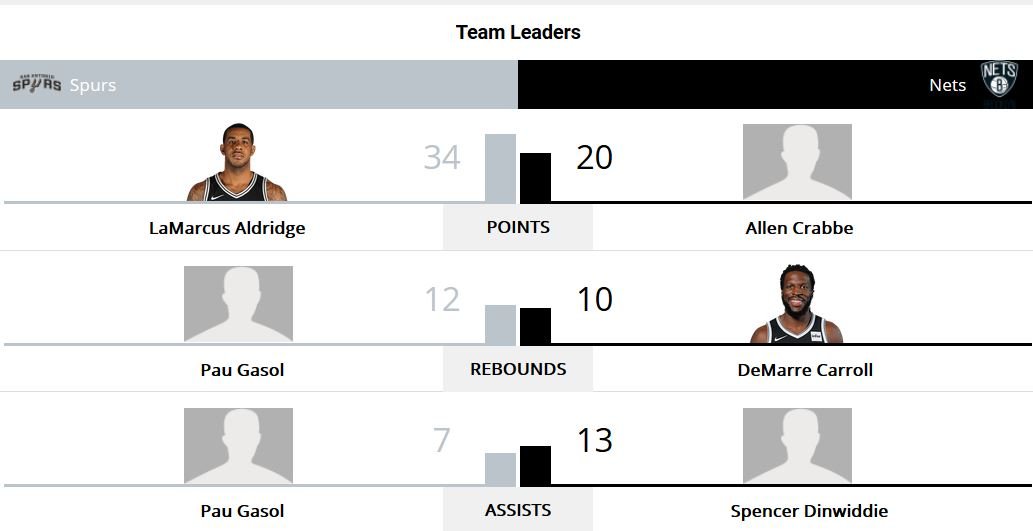