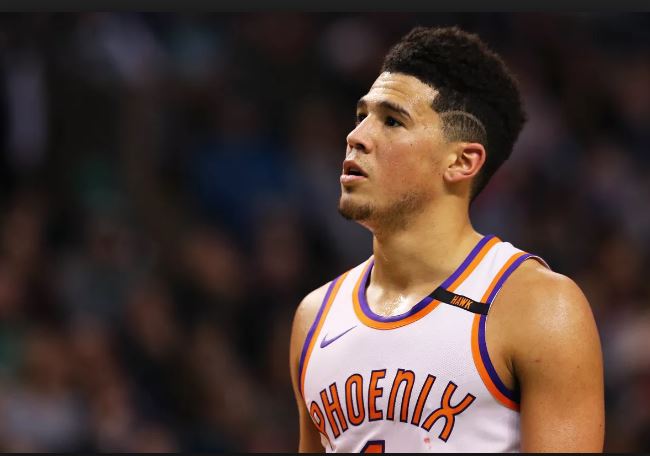 In his second consecutive appearance in the JBL Three-Point Contest,  Phoenix Suns budding star Devin Booker scorched the competition and came away with the victory.

In his rookie season (at the Toronto All-Star event) Devin Booker made enough of a mark in the JBL three-point contest many pundits picked him as their dark horse to upset this season. Still, few predicted that would mean the youngster coming out and setting a new all-time scoring round record. The young guard advanced through a tough group of talented three-point shooters to face-off against Klay Thompson and Tobias Harris in the final round.

"I wanted to go out there and make a name for myself."@DevinBook with @3DTV after setting a new 3PT Contest record with 28 PTS! #JBL3PT pic.twitter.com/9afjmwYNLt

Booker opened with a round of 19 points, tying Klay Thompson for the highest first round total. In his winning round, the third-year guard scored a whopping 28 points, setting a new three-point contest record for points in a round. Booker hit the majority of his shots in the second round, including four of five on his money-ball rack.

New LA Clipper Tobias Harris turned in two nice rounds in the competition. His first round, in which he amassed 18 points, tipped off the competition. Harris was slightly worse in the second round, only scoring 17 points but showing off his deadly three-point stroke.

Klay Thompson, who won the competition in 2016, was leading through the first round. The Golden State Warriors guard came out hot, scoring 19 points in his first run. Thompson caught fire in the second round as well, scoring 25 points but falling to Booker.

The Rest of the Field:

However, it was rough going for the rest of the competitors. Cold starts prohibited a few of the challengers from getting into a rhythm.

Paul George, who has made the second-most three-pointers in the NBA this season, finished with just nine points in his only run. Eastern All-Star Kyle Lowry, who leads the Raptors franchise in made three-pointers, was only able to score 11 points.

Even the reigning champion Eric Gordon struggled and only managed to score 12 points in his opening run. Bradley Beal, appearing in his second three-point contest, put in a respectable performance of 15 points.