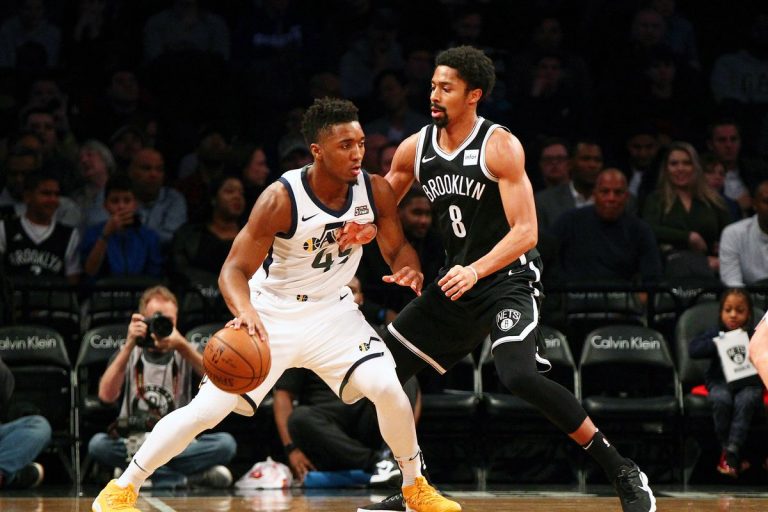 Donovan Mitchell Channels the Past in 2018 Slam Dunk Contest Victory

In what was arguably the highlight of the NBA All-Star Saturday night, the past and present collided in the 2018 Slam Dunk Contest.

A stacked field of talented dunkers took to the floor to dazzle the LA crowd gathered to witness the 2018 Slam Dunk Contest. With some amazing dunks, athleticism and originality the 2018 Slam Dunk Contest did not disappoint. Utah Jazz rookie Donovan Mitchell, who has had quite a few highlight dunks this year, took down talented Cleveland forward Larry Nance Jr. in the final round, winning by just two points.

Donovan Mitchell came away with the victory in this year’s Slam Dunk Contest, channeling Jazz legend Darrell Griffith and Raptors legend Vince Carter in two of his dunks.

In order to advance to the final round, Mitchell brought out his younger sister along with comedian Kevin Hart and his son. Donning a Darrell Griffith throwback jersey complete with the short shorts, Mitchell took to the floor. The guard then threw down a ferocious one-handed alley-oop while jumping over the Harts and his sister. The dunk earned Mitchell a 50 and a trip to the final round to face off against Larry Nance Jr.

While it wasn’t quite the same as the original, Mitchell brought out the big guns for his final dunk. Mitchell stripped off his Utah Jazz jersey to reveal a throwback Carter jersey. Then he threw down his own version of Carter’s 2000 dunk contest winner. The 36o windmill earned Mitchell 48 points, just enough to net him the victory.

"Half man, half amazing!"

Is that Donovan Mitchell or Vince Carter?

Mitchell replicates the dunking legend and wins the #VerizonDunk Contest with this incredible hammer!#TakeNote pic.twitter.com/G4XxvLbgYl

Larry Nance Jr. opened up this year’s contest with an ode to his father. Larry Nance Sr. was the winner of the first slam dunk contest back in 1984. With the help of Quick Change, Nance transformed into his father, complete with the old school Phoenix Suns jersey and short shorts, along with the high socks.

Nance went even further in paying tribute to his father, who assisted him on one of his later dunks. Nance electrified the crowd by throwing down his father’s iconic “rock-the-cradle” dunk from the 84′ contest.

Larry Nance Jr. (@Larrydn22) pays tribute to his father, who won the inaugural NBA Dunk Contest in 1984, with his "rock-the-cradle" dunk! pic.twitter.com/6vvufJ2zeU

Larry Nance Jr.’s final dunk of the night very well may have been the dunk OF the night. In a shocking display of originality and athleticism, Nance pulled off a double-tap dunk off the glass. After lobbing the ball off the glass, Nance caught the ball, threw it off the backboard again, and then threw down the dunk.

The forward did the dunk so easily, that the crowd and the commentators didn’t even realize what Nance had done until the replay appeared. The dunk was easily the most original of the night and earned the perfect score that it received.

Double tap off the glass for Larry Nance pic.twitter.com/nPwtPwZDSD

The Pogo-Stick and the Black Panther:

Despite failing to make the final round, Dennis Smith Jr. and Victor Oladipo provided some highlights of their own. Smith Jr. threw down an eye-opening 360 between the legs dunk while changing hands with the ball. The dunk may have been the most athletically appealing dunk of the night and earned the first perfect score of the competition from the judges.

🌪️ Dennis Smith Jr. goes through the legs and changes hands for the first 5⃣0⃣ of the evening!#VerizonDunk pic.twitter.com/DAJOx3ohL9

Victor Oladipo brought some props of his own to the competition. The Eastern Conference All-Star received an assist from Black Panther star Chadwick Boseman who was sitting courtside. Boseman produced a Black Panther mask for Oladipo, who then proceeded to throw down a hybrid dunk.

Oladipo cocked the ball back for a back scratcher and then double-pumped the dunk. Although it wasn’t enough to get Oladipo to the final round, it was a nice display of the guard’s athleticism.

Victor Oladipo did a #BlackPanther dunk with Chadwick Boseman's help and we're still not over it https://t.co/6Y5LiyPZii https://t.co/pGfIEZNI4L #NBAAllStar