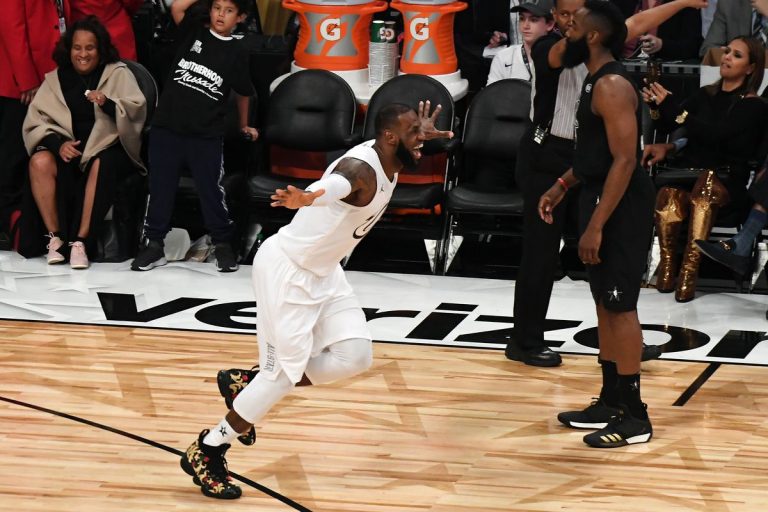 Thanks to the new roster format and a dosage of competitiveness, Team LeBron and Team Stephen produced one of the most entertaining All-Star Games of recent memory.  Team LeBron pulled out the win with a slim 148-145 margin of victory, the closest since 2012. As expected, the majority of the game was perimeter play, but baskets weren’t coming easy. Throughout the game, it was obvious that the players weren’t content with just coasting through the game and actually provided doses of defense.

The shooting from behind the arc wasn’t exactly scorching for either side Team Stephen shot just 26.2 from the perimeter while attempting 65 threes. On the other side, Team LeBron shot 32.8 percent and attempted 58 three-pointers. Per usual, LeBron James looked like he was playing on a whole other level. The All-Star game veteran posted a near-triple-double with 29 points, 10 rebounds, and 8 assists. His performance and team win were enough to earn him his third NBA All-Star MVP.

LeBron had some help from his All-Star teammates, especially number one pick Kevin Durant. Durant shot an efficient 7 of 13 from the floor and put up 19 points. Additionally, the seven-footer grabbed six rebounds and dished out five assists. Moreover, Durant and LeBron came up big at the end of the game, trapping Steph Curry and prohibiting Team Stephen from getting off a potential game-tying three on the final possession.

Almost every other Team Lebron player was able to reach double-digits in scoring during their time on the floor. Anthony Davis and Andre Drummond had 12 and 14 points respectively.

The starting backcourt of Kyrie Irving and Russell Westbrook both were within triple-double range. Irving finished with 13 points, 9 assists, and 7 rebounds while Westbrook ended with 11 points, 8 assists, and 8 boards. Paul George provided 16 points off of the bench and played some impactful defense. Bradley Beal and Kemba Walker both got involved on offense too, scoring 14 and 11 points respectively.

Unfortunately, first-time All-Stars Victor Oladipo and Goran Dragic were not able to make it to double-digits, scoring seven and two points each. Oladipo did manage to get out on the fast break and throw down a nice highlight dunk.

San Antonio Spur All-Star LaMarcus Aldridge made a fleeting four-minute appearance in the game but missed his only shot.

DeMar DeRozan and Damian Lillard lead the way for Team Stephen. DeRozan finished with 21 points on 7 of 13 shooting while Lillard finished with 21 shooting 9 of 14. First-timer Joel Embiid also had an impressive performance in his All-Star debut. The center finished with a near double-double of 19 points and 8 rebounds along with two big blocks.

Embiid had a sequence where he stepped out and hit a long three, then blocked Russell Westbrook in transition on the other end of the floor, showing what a dominant player he can be on both sides of the ball.

The other center on Team Stephen, Karl-Anthony Towns also had a solid game for himself. Towns put up a double-double of 17 points and 10 rebounds on 7 of 11 shooting.

Giannis Antetokounmpo also put in a nice performance for Team Stephen, scoring 16 points and grabbing 7 rebounds. The Greek Freak also had a few highlights in the game, including this putback off a James Harden miss:

Giannis Antetokounmpo is dunking it down over anyone pic.twitter.com/MyH5pq0isk

Klay Thompson carried over his hot shooting from the three-point contest, scoring 15 points on 5 of 10 shooting from deep. His partner in crime, Steph Curry, and MVP front-runner James Harden both struggled from the floor. Curry scored 11 points and shot just 4 of 14 while Harden scored 12 points on 5 of 19 shooting. Kyle Lowry also struggled from the floor, shooting 2 of 11 for four points but dishing out eleven assists.and grabbed 7 rebounds.

Draymond Green went 0 for 0 from the floor and scored three points while the remaining big man on Team Stephen, Al Horford, had six points on two of four shooting. Jimmy Butler was a DNP due to illness. He mentioned in the David Aldridge interview at the practice he wouldn’t be playing. Presumably he’s nursing an injury they did not want to disclose the specifics of.

Play of the Game:

One-point game, 40 seconds left on the clock, you’re probably expecting one of the All-Star players on Team LeBron to try and play hero-ball with an iso. However, this beautiful display of passing from LeBron, Kyrie, and Westbrook shows exactly what teamwork can accomplish. Russ gets into the paint and finds Irving on the baseline. Irving draws the double team and dumps it off to LeBron, who finishes around Draymond Green with a tough left-handed lay-in.

You can catch the full game highlights here courtesy of Ximo Pierto: