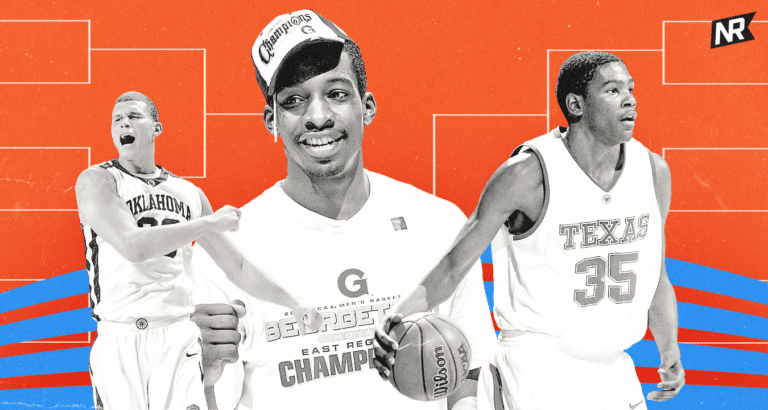 March Madness: A Look Back at Current Brooklyn Nets Players Who Went Dancing

March Madness is finally upon us. The most glorious time of the year for basketball fans. In the spirit of March Madness, here’s a look at all current Nets players who’ve made an appearance in the big dance as well as how they fared.

The Brooklyn Nets and March Madness

Kevin Durant only experienced March Madness once during his collegiate career which was to be expected. Durant, being the first freshman to be named National Player of the Year, led his Texas team to a No. 4 seed in the tournament that year. In the first round, Durant and the Longhorns were able to take down a pesky New Mexico State squad. The second round wasn’t as kind. Although Durant put up a 30-pt performance, his team was blown out by the Nick Young-led No. 5 seed USC.

It’s hard to imagine James Harden without his signature beard, however, that was exactly the case for a young Harden during his collegiate days. Unlike his eventual teammate Kevin Durant, Harden spent two years at Arizona State, however, the team only made the tournament during his sophomore year. Harden, the Pac-12 Player of the Year that season, struggled mightily come tournament time, however. Although his team defeated No. 11 seed Temple in the first round, Harden only tallied 9 points and mustered only one field goal. His cold stretch carried over to the next round as he totaled only 10 points in the team’s loss to the No. 3 seed Syracuse.

Although an early-season injury all but derailed Irving’s lone season with the Blue Devils, Kyrie still made an appearance in the big dance. In his first game in over 3 months, Irving scored 14 points in Duke’s first-round win over the No. 16 seed Hampton. Irving would follow that up with an 11-point performance in the second round against Michigan before exploding for 28 points in the Sweet Sixteen. Unfortunately, Irving and the Blue Devils were blitzed in the 2nd half of that game by the Derrick Williams-led No. 5 seed Wildcats of Arizona.

With Georgetown shocking the world and winning the Big East conference tournament this year, it’s only right we highlight a former Georgetown Hoya. Green made two appearances in the NCAA tournament. The first coming during his sophomore year when Georgetown made it to the Sweet Sixteen. Green had his best game of the tournament during their upset over the No. 2 seed Ohio State in the second round. A game in which Green posted a stat line of 19 points, 8 boards, and 6 assists. His team would go on to be ousted by the eventual National Champion Florida Gators.

Green and his Hoyas returned to the tournament the following year, this time making it all the way to the Final Four. Green had his shining moment during the Sweet Sixteen when he hit the game-winning shot with 2.5 seconds left to advance the Hoyas past Vanderbilt. In his eight NCAA tournament games, Green averaged 13.5 ppg and 7.6 rpg. Not too shabby for “Nephew Jeff”.

Although it feels like forever ago, Blake Griffin busted onto the scene at Oklahoma with his high-flying antics and ferocious dunks. I think we all recall him even hitting his head on the side of the backboard. Griffin helped lead his Sooners to back-to-back tournament appearances. Both times however the Sooners would fall in the second round. Griffin’s 2008-09 tournament performances weren’t too bad either. Griffin put up 30 points and grabbed 14 boards in their first-round matchup against Syracuse and then followed that up with a 23-point, 16 rebound output in their eventual loss to North Carolina.

Landry Shamet spent three years at Wichita State, arriving at the program only a few years after the school’s magical Final Four run in 2013. In three seasons at Wichita State, Shamet’s team went to the dance three times although Shamet only participated in two. Wichita made it to the second round in 2017 before losing to Kentucky. A game in which the Shockers lost by three. The following season Shamet’s Shockers were upset in the first round by the No. 13 seed Marshall.

On top of being the shortest player on the Nets roster, Chris Chiozza is one of the few Nets players to spend all four years in school. Chris did make back-to-back tournament appearances with Florida during his junior and senior years at the school. During his junior year, Chiozza’s Gators made it all the way to the Elite 8 where they were ultimately defeated by South Carolina. His senior year campaign in the tournament didn’t fare as well as the previous season as Florida was ousted in the second round by Texas Tech. Although he wasn’t a superstar per se, Chiozza was still an important member of that Gators team and was even named to the SEC All-defense team his senior season.

The fan-favorite Joe Harris out of Virginia. Harris, like Chris Chiozza, was a four-year collegiate player. Harris and the Cavaliers made the big dance two times during Joe’s time in “HOO-VILLE”. Joe’s first appearance during the 2011-12 season was a one-and-done deal, losing to Florida in the first round. Harris would get to experience March Madness again during his senior season when he helped lead the No. 1 seeded Cavaliers to the Sweet Sixteen where they would eventually be upset by the No. 4 seed Michigan State.

DeAndre Jordan was another one of those Nets that had the NBA in his sights as soon as he stepped onto campus. Jordan spent only one year at Texas A&amp;M and made the tournament in his lone season. His time in the big dance was short-lived with his No. 9 seed Aggies losing to the No. 1 seed UCLA Bruins in the second round.

The proverbial glue guy for this Nets team, Bruce Brown had a brief two-year campaign with the Hurricanes of Miami. Brown’s lone March Madness appearance came during his freshman season where Miami would lose in the dreaded first-round No.8 – No. 9 matchup to Michigan State.

Last but certainly not least, Brooklyn’s own Iron man Spencer Dinwiddie had a pretty impressive collegiate career before it was cut short due to injury. Dinwiddie would go on to make the tournament during his first two seasons. In his freshman year, Dinwiddie’s Bison made it to the second round before being bounced by the No. 3 seed Baylor. His sophomore season saw the school make it again but this time falling to the No. 7 seed Illinois.