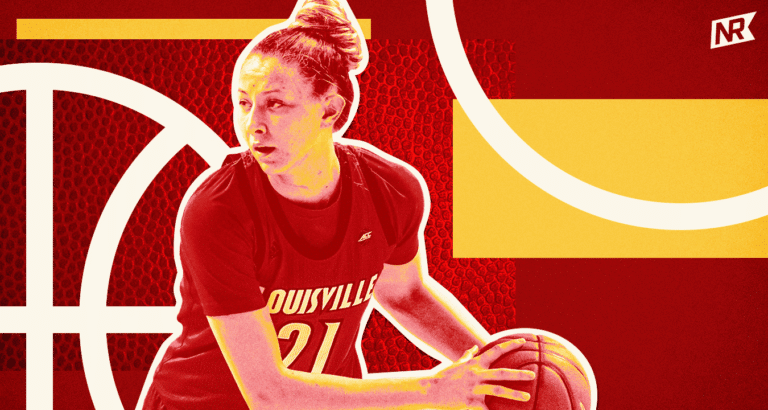 Second-round pick Kylee Shook turned 23 last Thursday, and her former college team plays in the NCAA Tournament on Monday. We got three fun facts about the former Louisville Cardinal.

The New York Liberty, known for their lasting marks of black and seafoam, painted the borough red with the 12th and 13th picks of the 2020 WNBA Draft. With those choices, the Liberty respectively opted to take former Louisville Cardinals Jazmine Jones and Kylee Shook. They added to a metropolitan arsenal surprisingly stocked with Derby City weaponry, joining the fold with Asia Durr.

The latter of those 2020 paired picks, Shook, turns 23 on Thursday. While it’s often difficult, as a rookie, to make an impact in the cramped setting of a WNBA roster, Shook took advantage of the unusual scenario in the Bradenton bubble. She averaged 4.1 points and 2.8 rebounds, notably enjoying a perfect shooting night from the floor (4-of-4) in a September tilt against Connecticut.

“She makes a lot of big plays for us,” former teammate Kia Nurse said of Shook after that matchup against the Sun. “I think you’re going to continue to see what she’s got in her bag. You’re going to see her come out on her own.”

In celebration of Shook’s birthday, NR has three things to know about the Liberty’s sophomore interior presence…

When you’re mentioned in the same sentence as Angel McCoughtry, you know you’ve reached some hallowed basketball ground. When that sentence is uttered in the realm of Louisville hoops, you’ve achieved something downright historic.

Shook took down one of McCoughtry’s Cardinal records in December 2019 against Tennessee-Martin, as the 163rd block of her career set the new mark. She eventually ended up with 223, including 86 in her senior season. That mark could’ve only grown had Louisville, likely on pace for a top seed, seen their NCAA Tournament run play out and blew out the previous best single-season tally (59) set by Yuliya Tokoya in 2007.

In the year before, the junior Shook also broke the single-game record set by Sherrone Vails in 2010, with eight in a win over Tennessee State.

Louisville senior Kylee Shook leads the conference and ranks ninth in the country with 69 blocks this season.

No other ACC player has more than 50. 😱🚫 pic.twitter.com/Mw1Y7oArMI

Kylee Shook’s outside game has come up big

Conventional basketball wisdom hints that Shook isn’t the type to post up from three-point range. Even Shook herself described her outside game as “iffy.” But such endeavors came up big during a big rivalry game against Kentucky at Rupp Arena.

A career-best trio of three-pointers, the last of which made a big difference, was part of a narrow yet game-changing victory that came ten days after they were upset by Ohio State in the Big Ten/ACC Challenge. It kicked off a 13-game winning streak that fueled the top seed rumors. Shook played her part on both sides of the ball, also putting in 11 points and 13 rebounds. Ironically, though, it was her past and present teammate Jones that took in the crucial board that sealed a 67-66 win.

Kylee Shook’s basketball breakout came not at Louisville, but rather in Colorado Springs. The daughter of a US Army veteran, Shook starred as a two-sport athlete at Mesa Ridge High School, also playing volleyball. Basketball, however, took over her life through record-breaking endeavors, picking up 1,797 points and 620 blocks over her career. For her efforts, Shook earned inclusion on both USA Today and McDonald’s All-American lists, partaking on the West side of the latter’s showcase game with future teammates Sabrina Ionescu and Leaonna Odom. Another, Joyner Holmes, represented the East.