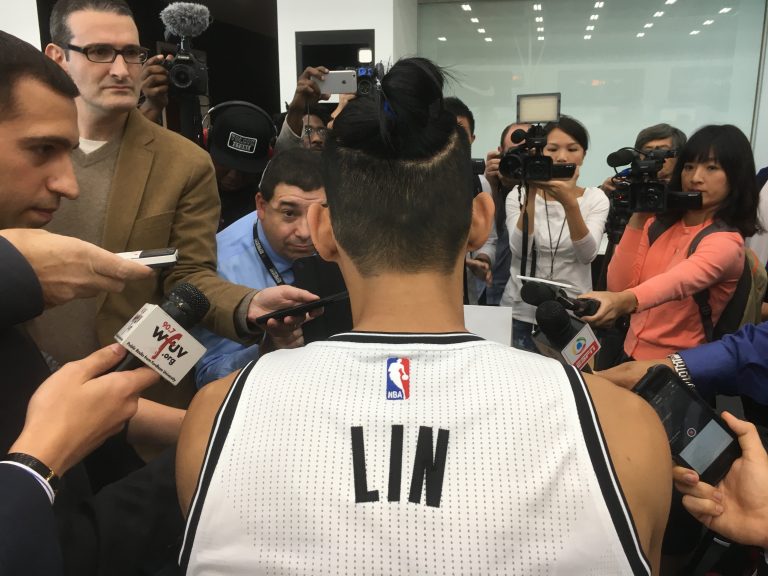 As exciting and awesome as the news that Jeremy Lin signed with the Brooklyn Nets on the first day of free agency, the wait for the season has been tough. The months of August and most of September were really slow, which is usually the case for basketball fans. However, the anticipation to see Lin play in a Nets uniform is great, due to his new role as a starting point guard.  It will be interesting to find out how Lin will do individually, because without a doubt, this will be his biggest season in his career.  He has said that he wants to be a great player prior to free agency, and it is clear at this point that he is currently in the best situation to succeed with a supportive head coach along with the front office.  Lin has become a more well-rounded player over the years, and he has matured to better handle the pressure of becoming a starter again.

Lin looks to be at peace with himself now, and he seems to be relishing his position as a leader on the team. This is a change of pace from the other teams that he has been on so far.  During media day for the Nets, he said, “I always wanted to be a leader.  Three months after I joined the Rockets, James Harden was on board so he became the leader. The situation with the Lakers wasn’t good either. I just didn’t have the opportunity to prove myself. But I think I have a pretty good chance this time.” Lin is in a good situation to become a leader, as he is a veteran who is entering his prime and his seventh season in the league.  At long last, Lin does not have to worry about his game being limited to accommodate a big-named player such as Carmelo Anthony, James Harden, or Kobe Bryant.  Lin is at his best playing team ball, and he will be the catalyst, as well as the playmaker.

Lin added, “I feel like for me here a lot of it is going to fall on me and Brook setting the tone, everyday in workouts, everyday we work, even how we live off the court, how we take care of our bodies, how we eat, sleep, everything. So we’re really going to have to set the tone for this leadership role I’ve been thrust into. That’s what I’ve known my whole life, as a basketball, so I’m comfortable with it.”  Brook Lopez is a good player, but in terms of leadership, he is not a guy who is vocal with his teammates and he will mostly lead by his play on the court.  Lin is already in a position to lead as the floor general, and it definitely helps that head coach Kenny Atkinson has been fully behind him as the leader of the team.  It is his time to become a leader on a rebuilding team, and he needs set a good example for young players like Isaiah Whitehead, Caris LeVert and Rondae-Hollis Jefferson.  Ever since Lin moved to Brooklyn from California in September, he has been working out with other players prior to training camp.

Whitehead is being groomed as a backup point guard by Atkinson, and Lin offered praise for the rookie.  Lin said, “He’s talented, he’s strong, he’s athletic, he can get to the basket.  The more time we spend, the more I’m going to be able to help him in changing his pace, changing his speed, making the right reads defensively, how to make it tough for opponents, and just teaching him the little things here and there.”  Whitehead then referred to Lin by saying, “It’s just his overall game. He’s a great player in the league, and I’m going to try to pick his brain.”  The new coaching staff has emphasized player development as one of the main goals for the season, Lin will help young players like Whitehead transition into the NBA by taking them under his wing.  The Nets have made an investment with Whitehead as being a part of their future, and his toughness as a player reflects the “Brooklyn Grit” that the team is marketing for the season.  After all, he is from Brooklyn, and he appears to be happy playing for his hometown team.

If there is one player who could most relate to Lin on the Nets’ roster, it is Sean Kilpatrick.  Like Lin, he was a good player in college who went undrafted, and the main reason why is because he suffered a slight tear on the meniscus cartilage of his right knee just before the 2014 draft.  In his senior season at the University of Cincinnati, Kilpatrick averaged 20.6 points and was named the consensus 2nd team All-American. He was clearly talented enough to be drafted, had it not been for the injury.  As an undrafted player, he had to fight for a roster spot in the NBA in the Summer League, and he had D-League stints as well as 10-day contracts with the Timberwolves, Nuggets, and the Nets prior to signing a multi-year deal in Brooklyn.   He played well last season for the Nets, as he averaged 13.8 points in just 23.2 minutes per game off the bench. This stellar performance earned him his first guaranteed contract in the NBA.  It was well-deserved, and Kilpatrick is a player on the rise this season. He has untapped potential as an offensive player and can provide instant offense off the bench.

It is evident that Kilpatrick has the desire to go with his work ethic to keep improving as a player. Now, he will play with a chip on his shoulder because he wants to prove himself in the league.  From the start of the summer until now, he has been in the gym at the Nets’ training center (HSS) on a regular basis, along with teammates Hollis-Jefferson and Chris McCullough.  Lin has also been working with Kilpatrick on his game. Kilpatrick sent out the following tweets:

Nothing like learning the game from my brother @JLin7 #BrooklynBasketball

As players who share similar histories and experiences of hardship coming into the NBA, it appears that Kilpatrick and Lin share a bond, which could help develop chemistry on the court.  Lin and Kilpatrick will play many minutes together in the backcourt this season, and Lin will help Kilpatrick take his game to the next level. Kilpatrick only makes the veteran’s minimum, and my prediction is that he will become one of the best bargains in the league.

Another player on the Nets that Lin seems to have made a good connection with is Rondae Hollis-Jefferson. One of the reasons could be that they are both fun-loving guys, yet fierce competitors at the same time.  RHJ always seems to be smiling or goofing off with his teammates, but there is no doubt that he plays the game with passion, effort, and hustle. He is another candidate primed for a breakout season. It is safe to say that Lin fans that are new to the Nets will come to appreciate his game and his impact on defense.  In training camp, it has been reported that he is the first guy to show up and the last guy to leave. He has also worked hard during the offseason to improve his shooting. RHJ was the first player to welcome Lin on Twitter after he signed with the Nets, and he just has a bubbly personality if you listen to his interviews and follow him on social media.  It’s almost guaranteed that he will have some kind of a handshake with Lin before every game this season.  RHJ is one of those glue guys you need on every team, and there is no doubt that he is one of the most important players.

One of the hot topics in the news is the protest during the national anthem among professional athletes, which was initiated by San Francisco 49ers Quarterback Colin Kaepernick.  Kaepernick’s protest involved kneeling during the national anthem, and Kapernick explained that he decided to use his platform to protest as a result of the recent police shootings and killing of unarmed African-Americans.  Lin addressed this issue on media day. “I will say the one thing that I will make sure is I don’t want to do anything alone. I want something to be united, I want there to be solidarity, because I don’t want it to be X versus Y, or Group A versus Group B versus Group C or whatever. It has to be, if I do anything, I would want to be behind a stand of unity, because I think that’s what we need. That’s what I think our nation needs right now.”   It was in Kaepernick’s right to kneel, but Lin gave a thoughtful answer in mentioning how he would like to include his teammates and decide as a group whether or not to protest.  This is another way for the players to bond, and it shows leadership on Lin’s part to talk about the team, not just what he would do as an individual.

Kenny Atkinson was supportive of what Lin stated at media day.  “I think it’s great that Jeremy said that, if they’re going to do it, they’re going to do it as a team.  I think we encourage our players to stand for the national anthem, but we also respect their individual rights. Jeremy coming out and saying that, I respect that and I respect his stance. But we’ll figure out how the players approach it. I respect what he said.”  It will interesting to see what the Nets players decide to do, but it will be a team decision. This is a positive sign that they will show unity as a group.  The Nets have a new culture now, and it goes beyond the basketball court and into the community.

Coach Atkinson discussed the leadership role for Lin. “It’s a heck of a challenge for him. I think he’s prepared for it, and I think it’s the right time in his career. He’s smart enough, and he’ll grow into becoming a better leader as this thing goes on.”  As of now, everything seems to be in place for Lin to achieve his goal of being the best player he can be in a supportive environment. Lin will make a smooth transition into becoming a great leader. The preseason and the regular season is coming upon us, so we will soon see how everything plays out on and off the court.