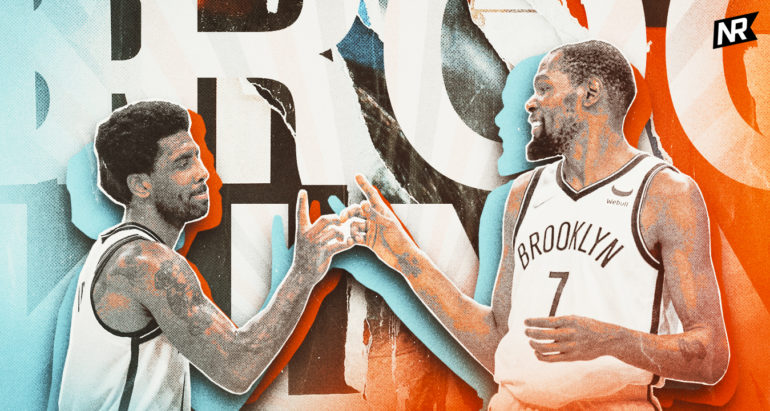 KD and KAI: The Franchise Cornerstones the Nets Have Always Needed

Throughout the years, Brooklyn Nets fans have seen “franchise cornerstones” come and go. Recent fans remember how poorly Deron Williams panned out with his disappearing act. Or how Brook Lopez was a fan favorite, but could never escape the dark days of the 2010s Nets. There was the possibility of D’Angelo Russell before his short two years with the Nets was not enough to establish him as a cornerstone.

The closest the the Nets had to a true franchise cornerstone would be legendary point guard Jason Kidd. During the Nets contending years in the early 2000s, the team traded for Kidd, who famously proclaimed “no more losing.” He was not lying. In his first season with the Nets the team finished with the best record in the Eastern Conference with 52–30. To build off the early success, Kidd led the team all the way to the NBA Finals, only to be swept by the three-peating Shaq and Kobe Lakers.

The following year Kidd as the franchise star continued to lead the then New Jersey Nets to similar success. With a 49–33 record, the Nets appeared in their second consecutive finals. This time, the Nets would fall to the San Antonio Spurs 4–2. However, after this finals loss, something felt different.

After the season, Kidd was an impending free agent. With franchise cornerstones, one feels that they don’t need to worry and the player is going to stay long-term. This was not the case of Kidd. After a brief two years, Kidd almost went to play for the Spurs, but ultimately decided to stay in New Jersey. However, the Nets were never able to recapture the success that they once had, eventually trading Kidd to Dallas several years later.

Enter Kevin Durant and Kyrie Irving. The two best friend superstars signed in the Summer of 2019. Even with Durant recovering from his achilles injury, there was newfound hope and expectations for the Brooklyn Nets. With the 2020-2021 campaign being the first true year of the KD and Kyrie era of Brooklyn, things were off to an electric start. Especially after the trade to acquire James Harden, the Nets finished with a 48–24 record and were favorites for the championship. Unfortunately, those expectations could not be met. After injuries to Irving and Harden, the heroics of Durant were not enough, as the Nets fell to the eventual champions Milwaukee Bucks in the second round in seven games.

The first big news of the summer was Durant announcing that he was signing a 4-year, $198 million extension. Meaning, the Nets were going to have the privilege of Kevin Durant for five more years.

Irving on the other hand, had not signed one. To make matters worse, New York City announced there would be a COVID vaccine mandate. Irving, who chose not to be vaccinated, would not be available for the home games. After being told to sit out the first few months of the season, Irving would finally have his part-time status in January, only playing road games, until the mandate was lifted recently for athletes and performers, allowing Irving to be full-time.

With Durant and Irving in the fold, it’s time to see if they can bring the Nets first ever title.

Even with the tumultuous season so far, there has been a calm around Durant and Irving. With uncertainties throughout the year and the drama surrounding the blockbuster James Harden-Ben Simmons trade, Nets fans could remain calm through the waters. This was through the astounding play of Kevin Durant. In his return from his MCL injury, Durant put the Nets on his back to carry Brooklyn to victories. But more importantly, he vocalized his commitment to the Nets franchise.

“But to be honest, I signed here for five years to play. You know what I’m saying? Looking at, obviously this year’s important, but no matter what happens this year I still want to do it again. And again. I want to continue to play, have this group together as long as we can. So short term, we can focus on that for sure, but we also looking at the big picture of things too,” Durant said.

“Seeing how we can build something sustainable for more than just a year or two or three. I know I’m getting old but I feel like I’m mentally and physically in a solid space to contribute to an organization that’s ready to grow and reach new heights. It’s always going to be rocky at first initially, when you start trying to start something new. So I’m excited about what the future holds, but I also want as much as we can get in the moment as well.”

That should be music to Nets fans ears to hear the long-term commitment from one of the best players in the league. To make things even better, Irving voiced his own commitment to stay with the Nets long-term as well.

“To be honest, I signed up for this for the long run,” Irving said. “I love this year. I’m grateful. It has not been the prototypical year. But when I look at my teammates and I look at what we have as an organization. I’m looking for the long run and what we can do, legacy talk. For me, it has always been about being comfortable and loving where I’m at. I love it here. Once that summertime hits, I know we’ll have some conversations but there’s no way I could leave my man 7 anywhere.”

With KD and Kyrie committed long-term, they will continue to help provide a valuable foundation for the Brooklyn Nets. Sean Marks and the front office will be able to continue to mold championship contending rosters along the two dynamic superstars.

True franchise cornerstones have their teammates support. That is the case for Durant and Irving. Throughout their time with the Nets, teammates have voiced their love and support for the two, and how much they enjoy playing with them. This was emphasized especially during Irving’s part-time status. Durant put it perfectly when he said “We love Kyrie as a human being, I don’t think we were ever upset at him as much as people on the outside were. We get that it may affect the outcome of some basketball games, but that’s not the only reason why we love Kyrie.”

Even after the Harden-Simmons trade, Swiss-army knife Bruce Brown said it best about the current chemistry of the team spearheaded by Durant and Irving,

“Everyone just likes each other.”

With their elite level of play, the Nets are always going to be championship contenders with Durant and Irving. It is not known yet if they will win the title this year, but with everything said and actions done, this isn’t a one time stop for the superstars. Like true franchise cornerstones, they want to build legacies here. The duo has been key in roster building and recruiting players to help them in their pursuit of a title. As they continue to set their roots in Brooklyn and build a foundation with long-term big-picture ideas, the Nets title window remains open.

Nets fans no longer have to worry about unhappy superstars or the threat of them leaving. Better yet, it is special to see how in quick two years, Durant and Irving have became fan favorites, and it would not be surprising to see statues or jersey retirements down the line.

After years of highs and lows, the Nets now have something special now, and for the future. Kevin Durant and Kyrie Irving are the franchise cornerstones the Brooklyn Nets have been looking for.