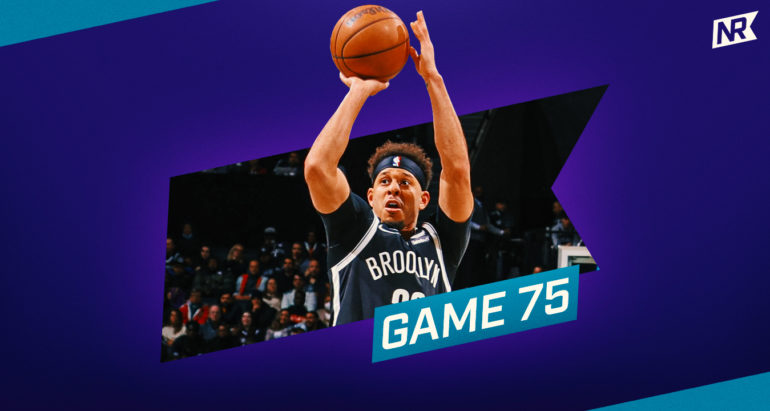 After coming off a dominant win against the Miami Heat, the Nets returned to Brooklyn for a battle with the Charlotte Hornets, who are fighting to get into the playoffs. The Hornets, led by LaMelo Ball’s 33 points, were able to defeat the Nets 119–110.

Kyrie Irving made his season debut at Barclays Center following the decision by Mayor Eric Adams to lift New York City’s vaccine mandate for professional athletes and performers. Irving, who only played in away games for part of this season, is now able to play full-time with the Nets ahead of the play-in tournament and the playoffs. Irving finished the game with 16 points and 11 assists. Kevin Durant would score 27 points and seven assists while Andre Drummond chipped in 20 points and 17 rebounds in the loss.

The first quarter was a back and forth battle between the two teams. Seth Curry scored the Nets’ first points off a corner three with a Durant assist. Drummond was a plus on both ends for the Nets as he converted some shots inside and defended the paint well. Durant was the Nets’ main playmaker to start the game as he had four assists coming off a pin down from Drummond and looking to find teammates out of that. Durant put up eight points in the first. The Hornets looked to feed Miles Bridges in the post to make plays or have Ball create himself, hunting for mismatches and attack. The Nets would go on a 10-0 run mid-way through the first, led by Durant knocking down a transition pull-up three and a possession later getting fouled as he shot three free throws. The Nets continued to pressure the Hornets inside as they ended the quarter leading 32-26.

The second quarter started slow for both teams trying to find open shots. Ball scored the first bucket of the second off a floater in the paint. Irving got fouled on a drive, he went 1-2 from the line, scoring his first points of the season at home. Drummond continued to be a menace inside, fighting for rebounds and putting up an efficient 10 points, leading the Nets in scoring this quarter. At the 9:12 mark in the second, Ball missed a floater leading to Bruce Brown tipping the ball to Irving and Irving rising up and knocking down a transition three to put the Nets up by 10. Miles Bridges would respond out of a timeout hitting a driving floater for the and one. Bridges scored 13 points in the quarter, attacking the Nets inside. The Hornets rallied back and put pressure on the Nets in the last four minutes as they went on a run. The Nets struggled to find consistent offense as every shot they put up just wasn’t falling but they still led going into halftime 60-56.

The Hornets completely took off in the third quarter as they scored 37 points and knocked down seven threes. Ball antagonized the Nets this quarter as he dropped 18 points, five of those being three-pointers. Ball knocked down three early three-pointers, including a deep pull-up three-point bomb to put the Hornets up by four and forced head coach Steve Nash into a timeout. The Nets couldn’t match the Hornets’ three-point shooting with only Durant knocking down two three-pointers tallying up 13 points in the quarter. The Hornets took a sizable lead but the Nets battled back. Hornets ended the third quarter leading 93–89.

In the fourth quarter, the Nets’ starters faced the Hornets bench for a good stretch. Durant started the fourth with a cross over on Kelly Oubre and knocked down a pull-up mid-range shot to cut the lead to two points. The Hornets continued to push their lead, at the 8:30 mark, Isaiah Thomas got a switch on Drummond and proceeded to knock down a pull-up three over him to push the Hornets’ lead to nine. Thomas also knocked down a tough layup over Irving and Drummond in the lane, he had five points in the quarter. Irving led the Nets in the fourth with 10 points as the team looked to make this a game, continuing to attack the Hornets inside. Irving made his mark midway through the fourth, finishing inside and hitting a tough pull-up mid-range shot over Ball which tied everything up 104 a piece. Irving would continue to score as he was fouled on a mid-range shot and he knocked down two free throws to put the Nets up by one point.

According to Cleaning the Glass, the Nets shot an efficient 71 percent at the rim and 43.8 percent from mid-range. The Nets three-point shooting would be the difference maker as they shot 20.6 percent going 7–34. The Hornets struggled mightily at the rim against the Nets, shooting a poor 42.3 percent and a poor 35 percent from mid-range but the Hornets dominated the three, shooting 53.1 percent going 17–32.

None of the Nets’ three-point shooters got it going as Mills scored two points, going 0-3 on three-pointers. Irving shot 11 percent from three, going 1-9, and just couldn’t find his shooting rhythm. Dragić scored seven points and went 0-4 from three. Curry would score 12 points but was 33 percent from three going 2-6.

The Brooklyn Nets fall to the ninth seed at a 39–36 record on the season, tied with the Charlotte Hornets. With their current record, the Nets would be placed in the play-in tournament to get a shot at the playoffs. Brooklyn has seven games left in the season and with Irving back full-time, they look to close the season by climbing up the standings and continuing to build their team chemistry