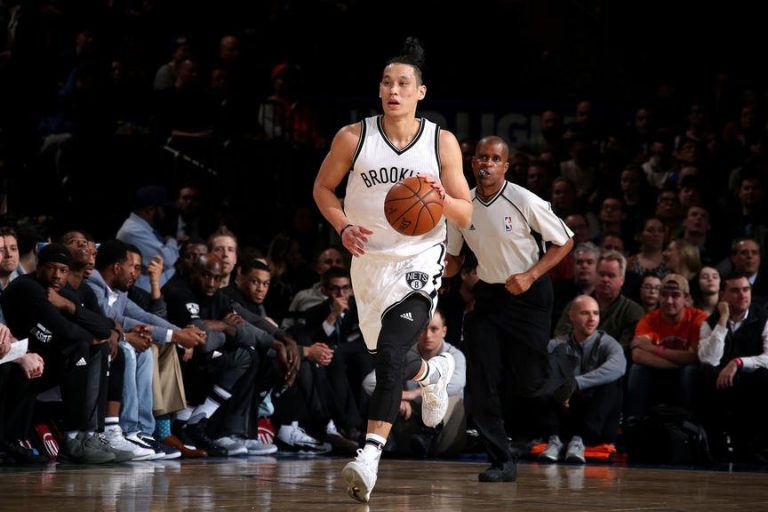 NEW YORK, NY - MARCH 16: Jeremy Lin #7 of the Brooklyn Nets brings the ball up court during the game against the New York Knicks on March 16, 2017 at Madison Square Garden in New York City, New York. NOTE TO USER: User expressly acknowledges and agrees that, by downloading and or using this photograph, User is consenting to the terms and conditions of the Getty Images License Agreement. Mandatory Copyright Notice: Copyright 2017 NBAE (Photo by Nathaniel S. Butler/NBAE via Getty Images)
Home
Brooklyn Nets
Charles Maniego

Jeremy Lin Pushes the Pace for the Brooklyn Nets

Jeremy Lin provided a major spark in the 36 games he played for the Brooklyn Nets. Not only was his scoring a major boost for the team, his role as a point guard was missed as well. Lin’s veteran experience was needed, with relatively inexperienced NBA playmakers Spencer Dinwiddie, Isaiah Whitehead, Yogi Ferrell and Sean Kilpatrick splitting time at the point guard spot. The Nets really showed their potential in the back half of the season with a healthy Lin on the floor in Brooklyn black and white.

Kenny Atkinson installed a new offense in his first season as Nets head coach. Despite the team’s struggles, the Nets ranked as one of the fastest paced teams in the league. Brooklyn also shot a bunch of three-pointers. Lin was signed to be the leader of the Nets’ charge. Greivis Vasquez was also signed to be a veteran floor general for the Nets off the bench. Vasquez seemingly was not fully healthy and his Nets career ended after only three games. Lin’s injury struggles were well documented. The Nets missed the two and Atkinson’s offense surely did as well.

But in his games where he was healthy, Lin was a revelation. His aggressiveness going to the basket really opened the floor up for the Nets’ shooters, and Lin’s willingness to push the ball helped Brook Lopez as well. The Brook-Lin combo really showed their efficiency late in the season, giving Nets fans a source of optimism.

One aspect of Lin’s game that stood out was his ability to push the pace. The Nets’ fast pace was set in stone by Atkinson. Ideally, a fast pace generates easy looks around the basket or open looks from the perimeter. It also can catch the defense sleeping if they don’t set up properly early. No other Nets point guard really pushed the pace to this extreme, choosing to run the Nets’ motion offense right away. With Lin back, he exploited the pace to the Nets’ advantage. Let’s take a look at some of Lin’s mastery at pushing the pace.

Against the New York Knicks, Lin finds Brook Lopez in the paint. Lin barely crosses half court when he tosses the pass to Lopez. Lopez is in the deep post, with Willy Hernangomez fronting him. Lopez simply turns around and he’s right at the rim. He throws down a big emphatic dunk. For Lopez, the worst that could happen was a foul. It was an easy basket for Lopez, set by Lin pushing the pace with a pass.

Here, Lin doesn’t pass to push the pace. This time he takes the ball himself. Coming off of a New York Knicks miss, Sean Kilpatrick grabs the rebound. Lin catches the pass and rockets ahead. His defender, Derrick Rose hasn’t anticipated Lin pushing the ball. Rose tries to draw the charge but he doesn’t really seem committed. None of the Knicks’ big men were in the paint either, so there was no last line of defense. Lin scoops the ball to the rim for an easy layup. It extends the Nets lead to 18, 65-47. An easy basket with the defense sleeping, spurred by Lin pushing the ball.

Against the Grizzlies, Lin grabs the rebound off of the perimeter jumper miss. The Nets are down three in the second quarter, trying to claw back before halftime. Lin turns around and looks ahead. Even before crossing the opposite free throw line, Lin tosses the touchdown pass. Sean Kilpatrick is ahead of the defense at the opposite free throw line. Kilpatrick catches the pass before the defense recovers. Kilpatrick lays the ball in calmly, allowing the Nets to bring the game within one point. Lin gets the long assist, or the touchdown pass if you will.

The camera barely catches up on this pass. Off of a made Atlanta Hawks basekt, Lin catches the defense again. Lin has taken two dribbles off of the inbounds pass before he spots Caris LeVert. CLV seems to be calling for the ball, and Lin passes it right away, about twelve feet behind the half court line. LeVert catches the ball. Lopez is in the opposite corner, pulling Dwight Howard away from the paint. Trevor Booker is at the top of the key, pulling him away from the paint as well. This allows LeVert to take the ball to the basket for an easy dunk. The Nets take a 65-62 lead after the dunk.

Sometimes, pushing the pace doesn’t exactly work out. Lin sometimes has issues with controlling the ball, and sometimes outlet passes may be too risky, leading to turnovers. Here’s one example…

Here, Lin grabs the defensive rebound after a Boston Celtics miss. He spots Brook Lopez running down the floor, trying to get inside position like in the first clip. Lin throws the pass, but Amir Johnson intercepts the pass. Lin may have overestimated the defensive coverage, airing the pass out a bit too much. That extra second may have allowed the Celtics to spot the miss and allow for the turnover.

With Jeremy Lin (hopefully) healthy next season, expect the Nets to continue to exploit easy baskets in transition. Kenny Atkinson has set the mandate. Expect the Nets to have a tad more athleticism next season as well, so they can properly push the pace and drive to the rim. The addition of a player like Milos Teodosic could help Lin as the receiver of those passes. Lin could be the outlet option, using his speed to catch the defense sleeping. With Jeremy Lin as a key guard, expect the Nets to continue to push the pace.