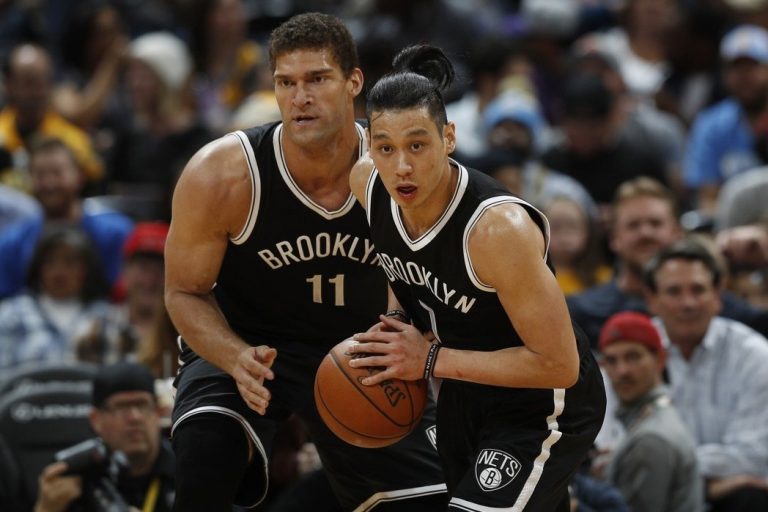 Jeremy Lin and Brook Lopez are the Brooklyn Nets’ key tandem. Here’s one play they can use for their success.

(Disclaimer: No pictures of Jeremy Lin, Brook Lopez or any Brooklyn Nets player flexing in this post. Thank you.)

Previously, I wrote about the zipper play, a common but successful play used for Jeremy Lin in his recent games. Against Sacramento on March 1st, Coach Kenny Atkinson drew another beautiful play. The Nets were up by nine points with around four-and-a-half minutes left in the fourth quarter. So Brooklyn was trying to maintain their lead as the game winded down (Spoiler: They won!)

It’s an easy layup for Jeremy Lin off of a feed from Trevor Booker. NBA coaches call that action a flex play. Its first option is a post up for Brook Lopez. But Lin was able to receive the pass deep in the paint, instead of Lopez. Let’s break it down! The play starts out of a timeout, so Coach Atkinson wanted to generate a bucket. Going up the court, Brook Lopez sets a nice screen on Darren Collison to get Lin past the half-court line. Kosta Koufos is way outside of his comfort zone on the perimeter. 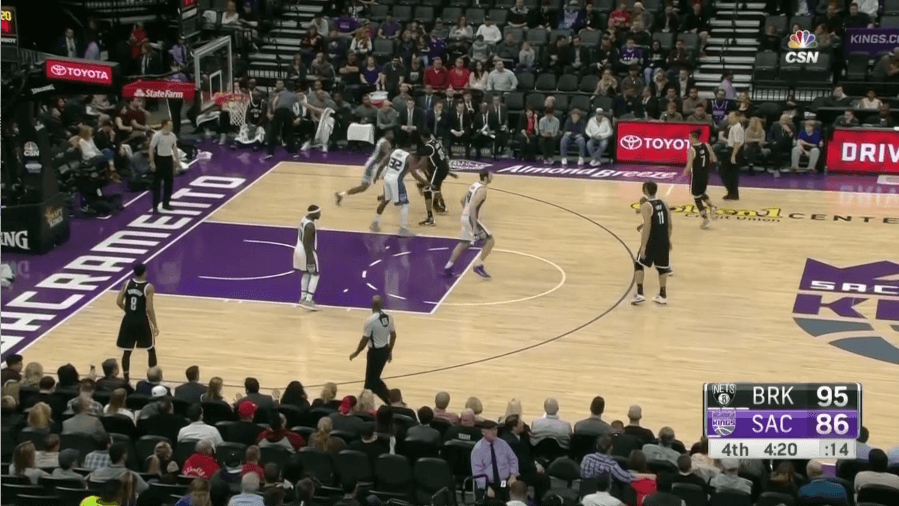 Now, Lin dribbles it across the court, where Trevor Booker and Caris LeVert are in the post and corner, respectively. As Lin dribbles to the side, Booker sets an off-ball screen for LeVert, who streaks to the top of the key. Lopez stands at the top of the key and Spencer Dinwiddie is in the opposite (weak-side) corner.

Lin cuts to the rim After the screen, Booker sets up for the post entry pass and receives it from Lin. After the pass, Lin starts to cut towards the rim. Off-ball, LeVert has cut to the top of the key. With Lopez at the top of the key as well, he dives to the rim on the weak side (opposite of Booker.) It’s a simple cut, fill, and replace. We see this often in basketball. A player cuts to a spot, and then the next player has to move to another space. It’s simple, but effective in creating a new look for the offense.

Lopez receives the screen from Lin 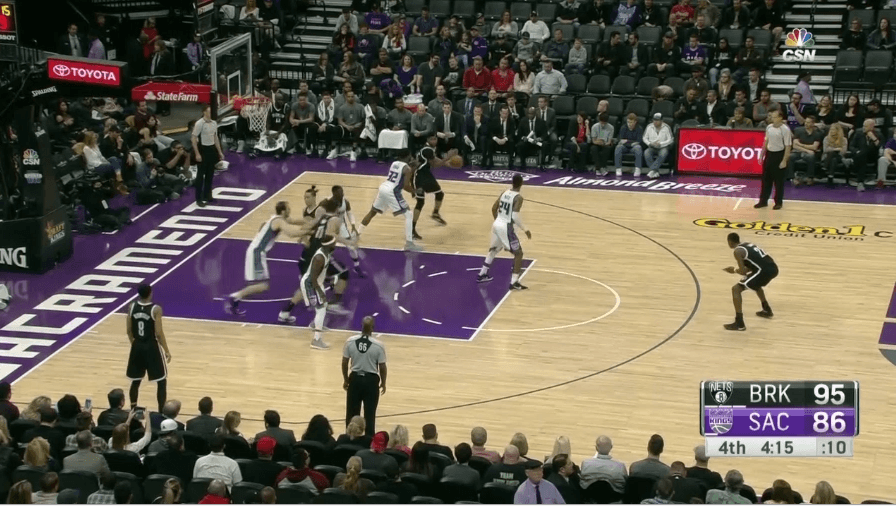 Above, Lin is in the paint. Booker is backing down his defender, Tyreke Evans. Lin comes across the paint and sets a screen for Brook Lopez. THIS is the flex cut. It’s a play where a guard sets an unexpected screen for a big man. Here, Lopez is ready for the post up. He has really good position down low, right on the block. The only issue with a Lopez post up is the spacing, with Booker too close for Brook to really go to work. One thing to note here is that Lin’s defender, Darren Collison, is denying the pass to Lopez. After the screen, Lin stands right under the basket. Booker has turned around from his post-up, looking to dish. 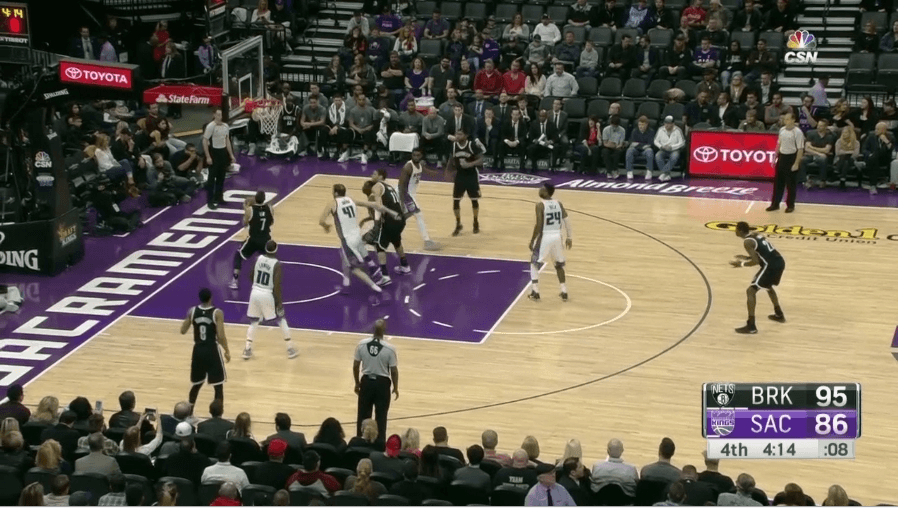 There, Lin is wide open right under the basket, with Darren Collison barely visible while trying to deny Lopez. Booker recognizes this and fires a pass past Lopez and to the open Lin. It’s the easiest shot all game for Lin. The Nets are up, 97-86. The Nets go on to win the game, 109-100. It was the tenth win of the season for the Nets, a positive sign of development with their starting point guard back in the lineup.

Outside of the pick and roll, the Brook-Lin combo has many options. The flex play is just one of them. Although it’s a play designed to get the big man open, there are several different options coming out of it. The Jeremy Lin open layup is just one of them.

But why should a guard set a screen for a big man?

Well, that’s the point. The guard might not be able to completely block out the defending big, but he can at least slow the opponent down. That’s all that’s needed if the offense is fast enough. In the play against the Kings, Lin’s screen put Lopez in good position for a post up, the intended design of the play. Depending on how the defense reacts, the play has several options for an easy bucket in the paint.

Obviously, the main action of the flex play is a clean look for a big man. But that leaves three other players open all over the floor if the defense collapses into the paint. Let’s look at the post-flex configuration the Nets had.

Caris LeVert and Spencer Dinwiddie are open on the perimeter. All five white jerseys have a foot in the paint. So Booker could have easily swung the ball to LeVert for a good look from three. If Darren Collison recovered on Lin, Booker could have passed it to Lin, who could have swung it to Dinwiddie for an open three in the corner.

If the defense played a little differently, there would be even more options. If Lin was defended well, he could’ve popped back out to the corner to receive a pass from Booker. From there, they could have run the sideline pick and roll (THE CHEESECAKE FACTORY OF BASKETBALL) with Booker. Lin could have also cut to the free throw line to initiate a drive. The possibilities for Jeremy Lin are…um….Lin-finite? I’m sorry.

For a great look at how the Suns (with Jeff Hornacek) ran flex action, take a look at this video! They ran a different initial action, but the flex play yielded some interesting results.

Here’s a look at some other flex plays. Against the Nuggets, Brook Lopez scored the easy bucket off of a flex cut. Take a look…

Above, Randy Foye set the screen to get Lopez open down low. But Jeremy Lin was the one who set up the offense, passing it to Foye in the corner, then setting a screen for Foye as he streaked to the basket. Lopez was able to receive the ball from Rondae Hollis-Jefferson on an easy layup. Pretty.

Here, Sean Kilpatrick sets the flex screen for Lopez here against the Indiana Pacers. Lopez receives the bounce pass from Rondae Hollis-Jefferson. Lopez is a little bit farther from the paint, but he can still score from that area. Lopez faces up on Myles Turner. He pivots, turns back around, and spins baseline. He slams down the basket. Like Pit in Super Smash Bros. Brawl, that bucket was TOO EASY.

A match made in Brook-Lin

The flex cut action is another way to manufacture easy buckets, just like the zipper play. Jeremy Lin is a strong, tall guard that is able to handle setting a screen on a much larger defender. Brook Lopez is a big man that can score with ease from anywhere on the court. The flex will make defenders go Ooh, Ooh, Ooh. (Shoutout Rich Homie Quan!)

Finally, It will be interesting to see how the Nets incorporate this simple, yet effective action in the future with this. Coach Atkinson has shown that he will try to put players in their best positions. I leave you with this, Brook-Lin.com readers! Keep Flexin’