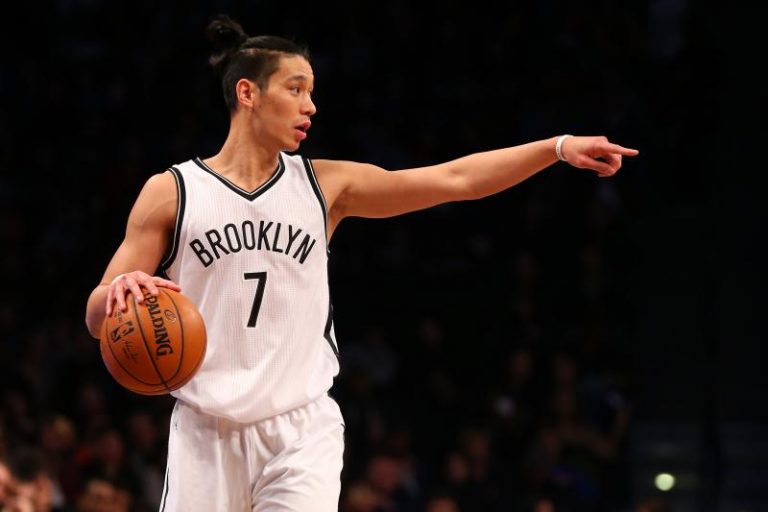 Jeremy Lin made his long-awaited return after the All-Star break. In his (minutes-restricted) games, Lin has begun to regain his form, showing the Nets what they missed for over half of the season. Lin has shown his ability as a downhill attacker, displaying his crafty touch at the rim. His jumper has looked impressive as of late. Even through the injuries, Lin still possesses the NBA’s most polarizing hairstyle. While he has had issues with his efficiency with the ball, Lin has been a welcome playmaking addition.

Because of the limited time Lin has played for the Nets this season, his role in the offense has not been fully defined. Previously, Lin worked well as an off-ball player, a secondary ballhandler amidst quality playmakers. He was featured in lineups with All-Star guards Kemba Walker and James Harden in Charlotte and Houston, respectively. As the lead point guard for Brooklyn, Lin has to set the tone for his teammates

In Brooklyn’s first game after the All-Star break, Lin made his return against the Denver Nuggets. In a disappointing loss to Denver, Lin played 15 minutes. But Lin’s minutes were a welcome addition for a team that only had one win in 2017. One play, in particular, was of note, for both the Nets and Jeremy Lin.

(WARNING: Over-analysis ahead. Proceed if you REALLY like the Brooklyn Nets, Jeremy Lin, and basketball)

So…what does a play ending in a Caris LeVert miss have to do with Jeremy Lin’s role as a leader of the Nets’ offense? So what side shall we look at? The socioeconomical, astrological, numerological, or mechanical implications of that one play on a cold Friday night in Denver? Um, none of them.

Basketball coaches call this a zipper cut. It’s a pretty common play and has many different wrinkles and scenarios.

Lin initiated the offense in a half court set. The play was likely called by Coach Kenny Atkinson and relayed to Lin to pass onto his teammates. Lin passed the ball to Caris LeVert at the top of the key. After the pass, Lin cut toward the basket, with a down screen from Brook Lopez. Lin continues to cut across the paint, as Sean Kilpatrick and Rondae Hollis-Jefferson set double screens. The point of the double screen was to trap or smush Lin’s defender, who was already lagging because of the initial Lopez screen. 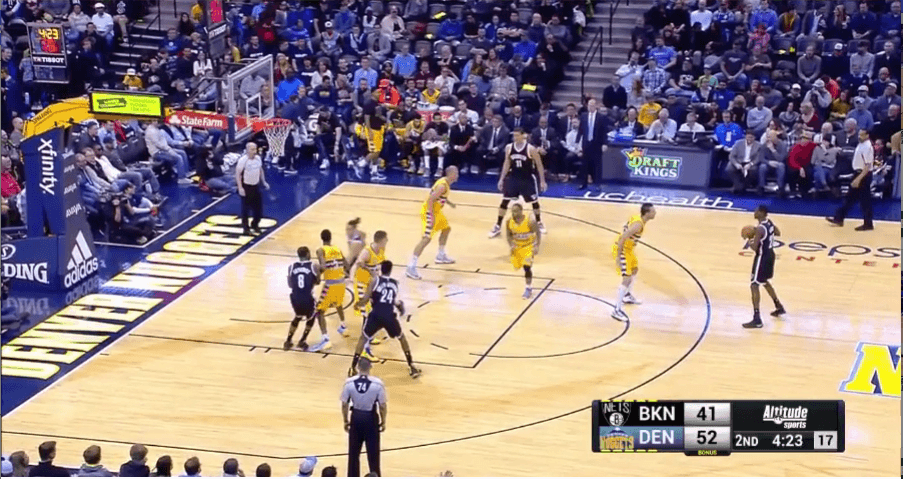 Lin cut to the deep corner, receiving the long pass from LeVert. Off-ball, Sean Kilpatrick cuts away to open up a driving lane, while Hollis-Jefferson creeps towards Lin to initiate the corner pick and roll. (The sideline pick and roll is The Cheesecake Factory of basketball plays, with all of its wonderful options.) 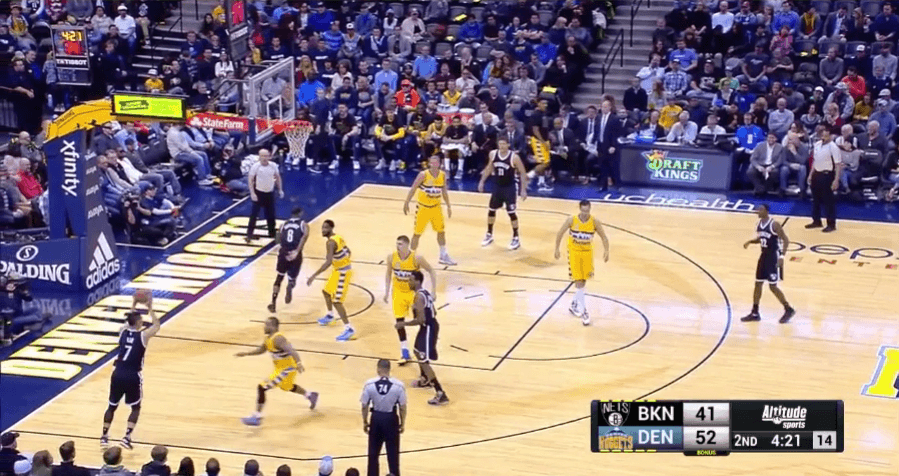 After receiving the pass, Lin denies the screen attempt by RHJ and takes the dribble. Jameer Nelson is a step slow, so Lin is able to get his shoulders past. Denver clogs the paint, with the entire Nuggets defense collapsing on his drive. 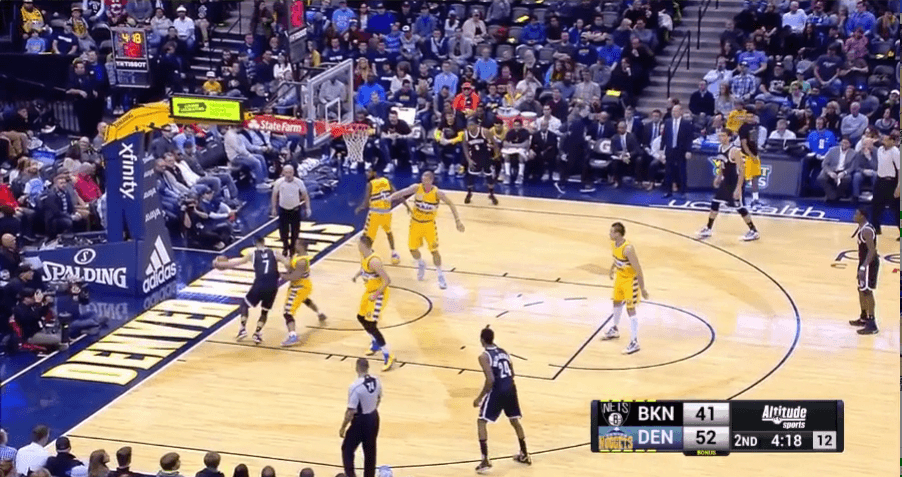 Lin is able to get into the paint and fires a pass to a wide-open Brook Lopez at the right elbow three-point line. Lopez’s defender, Mason Plumlee, is way too deep in the paint to recover, and Brook is a threat to shoot it from three. Danilo Gallinari rotates over onto Lopez. 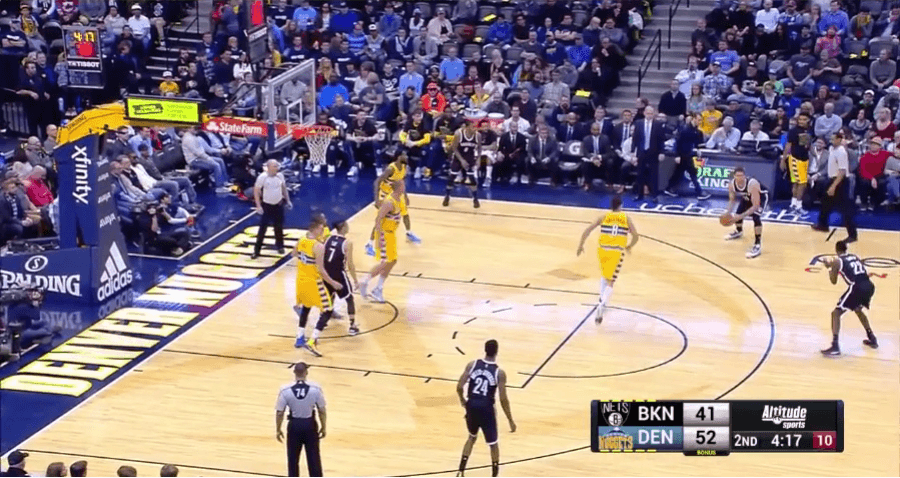 Lopez sees the defender rotating, and he passes it to LeVert, who is wide open at the top of the three-point arc. 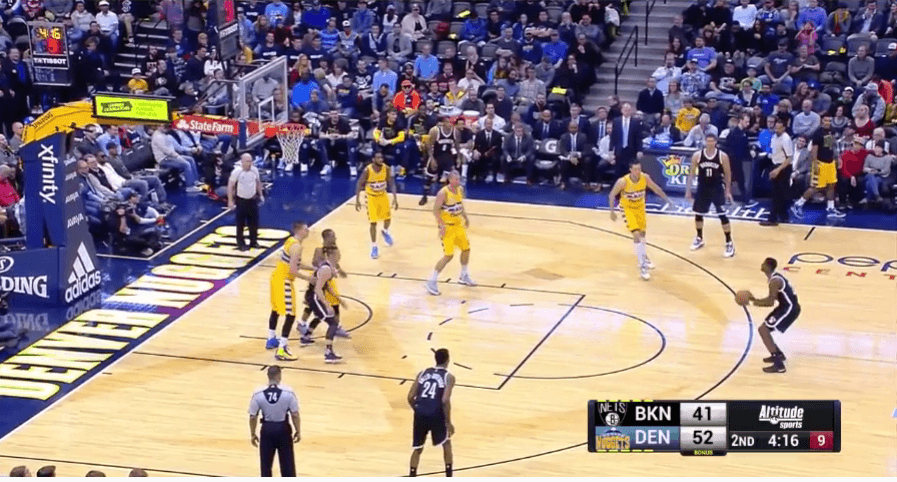 Look at that spacing! Ultimately, LeVert missed the shot. Here’s the play again, at game speed.

While watching the game, it doesn’t seem like much. It’s another miss for a Nets team that has missed way too many three point shots.

What does it all mean?

It was one play during the game. I know! While that play was not run against Denver, they have run that play sometimes during their road trip, though. But other teams have used the same action as well. A few of those teams are really, really good. Like NBA dynasty level good.

So who uses the zipper set?

If you guessed the San Antonio Spurs, you were right!

The San Antonio Spurs use the zipper play to allow Tony Parker to maximize his game. Tim Duncan (miss you, TD) was the man to set the screen to initiate the zipper play, which Lopez did for Lin. In Parker’s younger years, he was like Lin, a creative finisher around the rim. His drives could draw defenses in, opening up the court for the Spurs’ offensive weapons, or at least an open shot. Take a look at San Antonio’s poetry in motion below…and compare that to the play from Lin and Denver

In Atlanta, the zipper action was used to generate catch and shoot looks for Kyle Korver. While a different player from Lin and Parker, Korver also has the ability to draw attention from defenses. Atlanta would sometimes use this action to allow Jeff Teague to create. Teague is another guy that excels at finishing around the basket. He also likes to find his teammates after defensive breakdowns. Up in Beantown, Brad Stevens uses similar zipper action to generate looks for Isaiah Thomas. Thomas’ strengths are well known, and he has been a revelation this season. This isn’t déjà vu, right?

Like a Horns set, (elaborated on here) the options for the zipper play are endless. The easiest option is a corner three-point shot off of the initial long pass, which is a Korver specialty.

Another option is the sideline pick and roll. Rondae Hollis-Jefferson was ready to set the screen for Lin. The ballhandler can take the screen or deny it. The switch from a pick and roll can also draw in additional defenders. That would leave additional shooters open from three, or leave a player open at the rim for an easy layup.

In the play from the Nets game, Jeremy Lin drove baseline against a slower Jameer Nelson. With a zipper baseline drive, the ballhandler can dash to the rim for an easy layup or try to draw a foul in the paint. If the lane isn’t open for a shot attempt, the ballhandler can pass it to the perimeter. That was seen in the dish to an open Lopez, who is not afraid to take a shot from that range. The offense can also quickly initiate another drive and dish. The defense is left scrambling. It’s an exciting play.

In a read and react offense, the options for a zipper play are endless. Boston, again, has added several different wrinkles to the same action. It will be interesting to see if Brooklyn incorporates this play more often with Lin (hopefully) healthy for the rest of the season

The zipper play is a potentially successful option for a healthy Jeremy Lin and the Brooklyn Nets. Coach Kenny Atkinson’s pedigree has given him experience with similar players to Lin. Tony Parker, Jeff Teague, and Isaiah Thomas run the play to their benefit. Those three are (or were) All Stars, ranking as the best point guards in their conference. With a deep point guard crop in today’s NBA, making the All-Star team is no small feat.

While Lin may not be on the level of those three currently, the zipper cut could maximize his talent as a finisher. If run successfully, zipper action can really open up the offense, with lots of potential for shooters, drivers, and highlight video watchers. With Kenny Atkinson’s read and attack offense, Jeremy Lin and the Brooklyn Nets will look to use this play to their advantage.