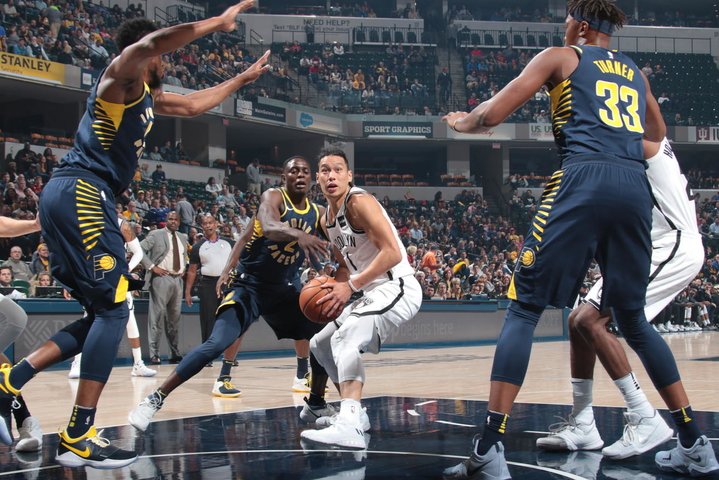 INDIANAPOLIS, IN - OCTOBER 18: Jeremy Lin #7 of the Brooklyn Nets handles the ball during the season game against the Indiana Pacers on October 18, 2017 at Bankers Life Fieldhouse in Indianapolis, Indiana. NOTE TO USER: User expressly acknowledges and agrees that, by downloading and or using this Photograph, user is consenting to the terms and conditions of the Getty Images License Agreement. Mandatory Copyright Notice: Copyright 2017 NBAE (Photo by Ron Hoskins/NBAE via Getty Images)
Home
Brooklyn Nets
Nets Republic

Why Jeremy Lin is the New Leader of the Nets

When Jeremy Lin signed that 3-year, $36 million deal with the Nets this summer, most NBA analysts figured they were a perfect match. A starting spot, the presence of Kenny Atkinson, a return to New York – it simply made sense for all parties involved. What nobody could predict, however, is just how big of a role Lin would have from the very beginning. Unfortunately, the Nets were reminded of that in the worst way possible. After suffering a hamstring injury against the Detroit Pistons on November 2nd, Lin missed the following 9 games.

This state of events left Kenny Atkinson scrambling to cope with the domino effect of Lin’s absence. But even after putting out a number of different lineups, the Nets’ decline could not be stopped. With Lin on the court, Brooklyn is 2-3. Without him, they’re 2-7, and currently on a 5-game losing streak. Even more tellingly, the Nets had a +1.8 point differential while Lin was on the court. Without him, their point differential crumbles down to a horrible -5.7. Yes, you read that right – on his very own, Lin is worth 7.2 points to the Nets.

And even if you’re not a stats guy, the eye test is possibly even more damning for the Lin-less Nets. In order for Atkinson’s motion offense to work, you need a versatile point guard running the show. You need a guy who can shoot, penetrate, dribble and pass the ball. What’s more, he needs to know how to read opposing defenses and make the right play at the right time. Lin is good at all of those things, but none of his replacements are that resourceful.

Things are not much better on the defensive end, either. Without Lin, the Nets are all but helpless against opposing point guards. Not being able to stop Russell Westbrook, Damian Lillard or Chris Paul from going off is one thing, but allowing D’Angelo Russell to score 32 points in 31 minutes is inexcusable. Lin is not a lockdown defender, but he’s always active on that end of the floor. This chart is a decent representation of his defensive value:

Of course, a big part of the point guard problem is finding a decent replacement for Lin. Greivis Vasquez started the season as the main backup, but his own injury woes forced the Nets to waive him after just three games. Isaiah Whitehead’s assist-to-turnover ratio is teetering dangerously close to 1:1. Sean Kilpatrick and Randy Foye have rarely been asked to create for others, and it’s becoming clear the floor general role doesn’t suit them. Yogi Ferrell is shooting 36.4% from the field and 29.4% from beyond the arc.

And just to add to the dreary mood, nobody really knows when Lin will return. Hamstring sprains are hard to evaluate, but it’s obvious that the original 2-week time frame was too optimistic. The team has announced he’s progressing on schedule, but they haven’t set a return date. We do know he’s not part of team practices, so he’s at least one or two weeks away. And while taking the long term approach is the right thing to do, Lin’s prolonged absence is certainly taking a toll on the rest of the team.

But it’s not all doom and gloom in Brook-Lin! Indeed, longtime Nets fans haven’t had this many reasons to be optimistic in years. Atkinson and Sean Marks have wasted no time in installing a new, competitive and teamwork-based culture. By signing high character individuals, they have vastly improved the team’s chemistry. These new Nets might not be championship contenders, but you can count on them bringing the passion and enthusiasm night after night. You don’t need to look too far into the past to realize why this is such an important step forward for the franchise.

And right now, there’s no player exemplifying the Nets better than Jeremy Lin. Despite not being able to help his teammates on the court, he’s still travelling with them. Not only that, but he’s taking an active role on the bench. You might have seen a couple of pictures of him holding a clipboard floating around on Twitter. That’s not a fashion detail – he’s actually designing plays for the team. How many star players do you see doing that?

Indeed, ever since he’s arrived in Brooklyn, Lin has not taken a wrong step. He’s been quick to support the Black Lives Matter movement, Colin Kaepernick’s protest, as well as his own teammates. Did you see Kilpatrick call Lin his big brother? Or his numerous reactions on the bench, which happens pretty much every time a Net hits a contested three or a tough fadeaway jumper?

Reviving this franchise is going to be a process. We all knew that. But in Jeremy Lin, the Nets have a leader to light the way. All they need now is the right supporting cast.