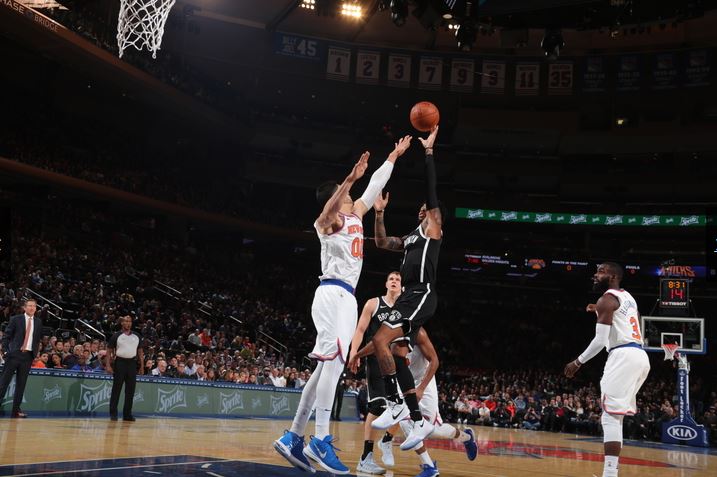 It’s been the tale of two weekends for New York City’s basketball teams. The Brooklyn Nets last played Saturday against the Washington Wizards, a contest where they ultimately lost but forced overtime after being down by as many as 23. The New York Knicks, who also lost, did it far more spectacularly. At one point in the third, they led by as many as 19. New Orleans came back to beat them in overtime thanks to Anthony Davis, who’s a human cheat code.

Monday will mark the third meeting this season between the two. The Knicks have come out on top in both games. That could, however, change. Brooklyn’s played exceptional basketball to start the New Year despite losing four of their first seven games. Six of those contests have been nail-biters decided by six points or fewer, and they’ve gone down to the wire with the Boston Celtics and Toronto Raptors, the Eastern Conference’s two best teams. Their lone embarrassing showing was to the Detroit Pistons, a 34-point drubbing of which we won’t speak.

The Brooklyn Nets have done an outstanding job stifling their opponents this month. That, however, only continues if they limit the output of everyone not named Tim Hardaway Jr. and Kristaps Porzinigs. Hardaway has returned from injury and looks like he never left. In two games, he’s pouring in 20.5 points on 46.7 percent shooting. Porzingis, who’s dropping a cool 19.9 a night, has found his stroke from outside, connecting on 41.2 percent of his triples.

Michael Beasley (16.2 points), Enes Kanter (14.3), Jarrett Jack (13.7) and Courtney Lee (13.3) are the only other guys contributing significantly on the offensive end. Taking them out of rhythm makes things much tougher for Hardaway and Porzingis. The last thing the Nets want is those two getting hot.

Fortunately, the numbers are on their side. Brooklyn’s defensive rating of 101.0 is the sixth-lowest mark this month. Slowing the pace down has helped them tremendously. Moreover, they’ve prioritized running other teams off of the three-point line. In their last seven games, the Nets are giving up 23.7 threes a night, which fall at a rate of 31.9 percent.

Increasing the intensity on defense and slowing the game down has come at the expense of Brooklyn’s offense. They’re scoring just 99.6 points a night while shooting the three-ball at 33.3 percent. The biggest reason their games have been close is it’s a challenge for them to create opportunities on offense. With that said, some things have worked for them.

The entire NBA knows that Spencer Dinwiddie is going to be the first option. He’s deserving of that honor. So far this month, he’s scoring 17.0 points a night and is noticeably more aggressive. That change has opened up the offense more despite the numbers not showing it; when Dinwiddie drives, the defense can’t get away with not helping. He’s got the size to finish over smaller players and, more importantly, will no longer pass up the easy look.

While the focus is on Dinwiddie, Brooklyn needs to find ways to get Allen Crabbe and Joe Harris open with some away-from-the-ball action. They’ve been the two most reliable shooters over this recent stretch — Harris is hitting 48.1 percent of his triples and Crabbe’s at 41.2. The third-highest is Quincy Acy at 34.5.

It may sound wild, but having them each shoot between 10 or 15 shots would be beneficial so long as they come organically. Against Washington, Crabbe got 15 attempts and Harris just six. Most of them are going to be threes anyway, so why not ride your hot hands and maximize efficiency?