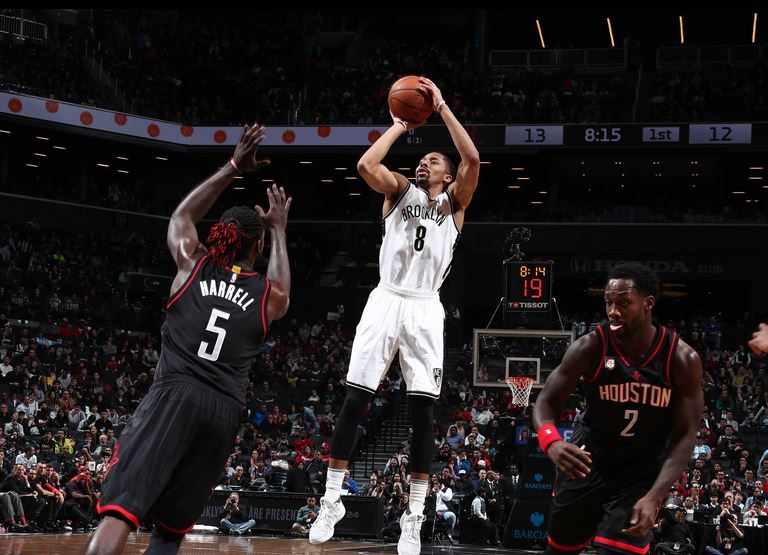 How To Net The Win: Brooklyn Nets vs. Houston Rockets 2-6-18

The first meeting between the Brooklyn Nets and Houston Rockets was a near bloodbath. After allowing 43 points in the first quarter, Brooklyn was able to slow the bleeding but still lost 117-103. That was back in November. Over the last couple of months, the Rockets have turned it up a few notches thanks to James Harden, who’s separating himself as the favorite to bring home the MVP. During that same span, the Nets have more or less remained the same.

Harden was crucial to Houston’s victory over Brooklyn and he poured in 37 points on a blistering 13-of-20 shooting. He was 8-of-13 from three and played around with the Nets like they were a junior varsity team. On top of that, Harden added 10 rebounds and eight assists. Houston finished the game with 31 assists on 42 field goals, and they connected on 20 of their 50 threes. Brooklyn wasn’t able to keep pace and missed 29 triples, but their aggressiveness was a silver lining. And that’s going to be vital for preventing a blowout.

The Houston Rockets are an elite defensive team. That’s indisputable. They’re 5-1 in their last six games and boast a defensive rating of 102.0, the league’s sixth-lowest total. Preventing opponents from scoring starts at the three-point line, and over that same six-game span, the Rockets are allowing a clip of 35 percent from downtown, which is roughly the league average. However, they’re surrendering, on average, 30.0 attempts per game. Part of that could be by design, but Houston’s aerial attack on offense plays with the opponents’ psyche and turns the game into a shootout which creates more than a couple bad shots. The counter to this is attacking the basket.

Overall, the Rockets allow a conversion rate of 45 percent, and that’s buoyed by opponents shooting 50.6 percent inside the three-point line. Of course, getting into the lane is easier said than done. Houston does an excellent job of defending without fouling, but they do play lackadaisical sometimes. Brooklyn faired well going downhill in their first meeting, but they also fell into the trance of launching ill-advised threes. (For context, Spencer Dinwiddie was 4-of-6 on twos and Caris LeVert was 6-of-9.)

Move The Ball With Purpose

Just because Houston has a sturdy defense doesn’t mean their impenetrable. Their last loss was to the New Orleans Pelicans on Jan. 26, and the Pelicans assisted on 36 of their 44 makes. That’s fantastic. But there’s also a severe talent deficit for Brooklyn. Luckily, you don’t have to have two All-NBA guys facilitating to wear out the defense.

This point plays off of the first one in the sense that driving lanes won’t open up unless the defense is forced to move. The Rockets have the length and personnel on the wing to keep guys in front of them. That renders isolation basketball ineffective. The counter to that is making crisp, accurate and correct passes when the opportunity presents itself. Once the defense starts rotating, guys are out of position and then someone like Spencer Dinwiddie or Joe Harris can slash to the basket and make a play. That doesn’t happen by shooting contested threes in transition. It’s all easier said than done, though.

Execution, particularly late in the game, has been an Achilles heel for the Nets this year. They can string together multiple possessions where they toy with defenders and look like a playoff team but then immediately follow it up with three-straight turnovers or bad shots. Those possessions will be crucial because the Rockets can easily capitalize on any mistakes. If that happens, the Nets will be down seven or nine points in less than two minutes, and that effectively steals all of their momentum.

History: The Rockets hold the all-time record between the squads (61 of 91). Houston swept the Brooklyn Nets last season and took the first game this year.

Odds: Not surprisingly the Rockets are the favorites with an 11 point expected advantage and an over/under of 217.5 points.