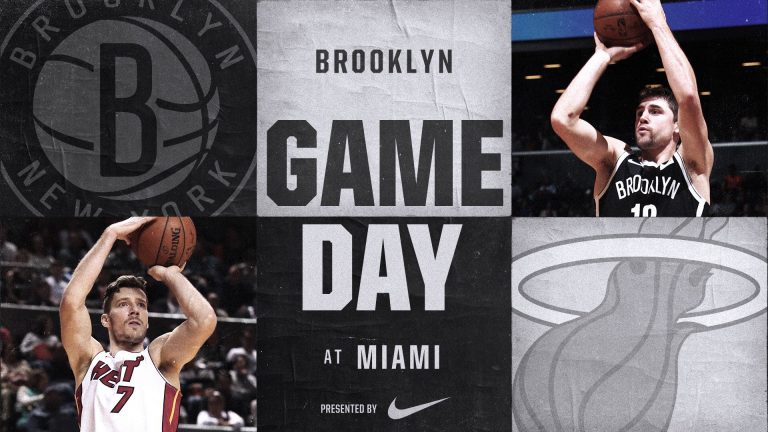 The Brooklyn Nets and Miami Heat will go head-to-head for the second time on Friday night. Most recently, Brooklyn fell apart in Mexico City, falling to Miami 101-89. In the games leading up to this one, the Nets have lost four of the last five and have had issues gathering momentum during this stretch.

The problems with injuries have been significant. It’s been noticeable on the offensive end. On top of that, the defense hasn’t helped much, and the inability to convert on the other side of the floor only compounds it.

The Return of Hassan Whiteside

The first meeting between these two highlighted the Nets’ inconsistency on offense. Miami’s defense had a field day, and that was without Hassan Whiteside. Brooklyn, who had beaten Oklahoma City two nights before, shot just 40.7 percent from the floor and a nauseating 7-of-27 from three (25.9 percent). Additionally, they only got to the foul line 19 times, where they made 16.

Brooklyn was as aggressive as it could’ve been, but that dynamic is going to change now that Whiteside’s back. He missed the last 11 games with a knee injury. On the season, he’s averaging 1.5 blocks a night. That number is down from previous years, but Erik Spoelstra still expects Whiteside to anchor the league’s seventh-best defense. His presence will have some impact on how Brooklyn runs its offense, but the silver lining is that the coaching staff is not in a rush to push his minutes. He’ll likely be in the 18 to 22 minute range on Friday.

Miami, statistically, has less firepower than Brooklyn does, but it’s going to be another long night if the Heat bring the clamps out again. The Nets, however, have a chance because of the slew of absences the Heat are dealing with. Dion Waiters and James Johnson combine for 25.1 points a night, but they have the explosiveness to surpass 20 if the defense gives it to them. Fortunately, the Nets don’t entirely lack on the offensive end.

Rondae Hollis-Jefferson, despite the team’s woes, has been one of the more consistent options over their last five games. His scoring is up to 16.2 per game, and he’s shooting 47 percent from the floor and hauling in 8.4 rebounds. The evolution of his skill-set is surprising, and Hollis-Jefferson is more comfortable with the ball in his hands, allowing him to do more than just hang around the baseline and clean up missed shots. Should the Nets use him as the roll man in a pick-and-roll, he’s capable of popping out to 17 feet and canning the jumper. The rest of the team, however, hasn’t been as lucky.

Who Else Can Contribute?

Caris LeVert and Spencer Dinwiddie have helped Hollis Jefferson carry the offense. LeVert won’t suit up on Friday, which forces the Brooklyn Nets to get creative with how they supplement his 16.8 points per game. The scoring isn’t the worst part, though. LeVert’s been one of three players consistently nailing triples while embracing a higher volume. Over the last five, he’s 12-of-19 from downtown. Nik Stauskas (14-of-24) and Dinwiddie (14-of-30) are the other two. With that said, the former should be in line to see more minutes. He’s impressed since coming over from the Philadelphia 76ers and has distracted us from Jahlil Okafor, who, according to the Basketball Reference injury report, is still trying to get his conditioning in check.

The rest of the offense is reliant on Joe Harris, Allen Crabbe and DeMarre Carroll to make threes, something they haven’t done as of late. Combined, they’re 22-of-76 during the last five games. Shooters, however, are easily capable of snapping out of their slump. None of them have been reluctant to try, so that’s an encouraging sign. Unfortunately, these are the problems you run into when your offense is analytics-based. The Nets just look worse because they don’t have the star playmaker to get them a bucket when they need one.

The Nets have the talent to beat the Heat, but that’s only if the three ball is falling. That’s been a common theme during D’Angelo Russell‘s absence. Should Carroll, Crabbe and Harris get hot while Dinwiddie and Hollis-Jefferson lead the team, things can get out of hand quickly. On the flip side, Miami might also get hot. Should that happen, the Nets’ defense isn’t well-equipped enough to slow them down.