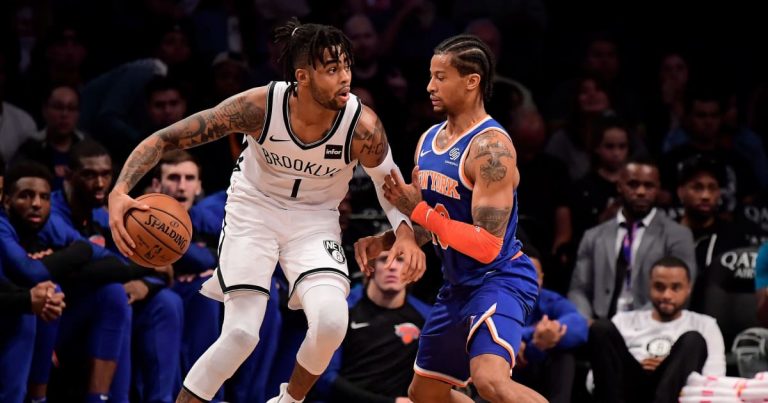 When looking at the Nets schedule before this season, Friday’s meeting with the Houston Rockets felt like a guaranteed loss. Houston had the NBA’s best record last year and a historically good regular season before taking the Warriors to seven games in the Western Conference Finals.

But the Rockets are off to a horrendous start to this season. James Harden and Chris Paul have missed time for various reasons — injuries for Harden, suspension for Paul — and the team has been so thin that Michael Carter-Williams started a game at the three. In the year 2018. On a Mike D’Antoni coached team where shooting threes is an important aspect of what the team does offensively. Yikes.

Houston ranks 25th in offensive rating and 25th in defensive rating. Here’s a list of players with a positive PIPM on the team:

I did not forget to type something there.

So, what do the Nets need to do to beat a team that was one of the league’s best last year?

Hope James Harden is out again

James Harden is listed as doubtful with a hamstring injury, and in an 82 game season there’s no real reason to put Harden on the floor if he’s not fully healed.

But without Harden, things look bleak for this Rockets team. James Ennis is hurt. Brandon Knight is hurt. Carmelo Anthony is playing a key role on this team. Head coach Mike D’Antoni has said that the team may not be able to keep up the defensive switching that made them so good on that end in the past. Things are falling apart for the Rockets.

They won’t fall apart forever. When Harden and Paul are both back on the court, Houston should get back to being one of the NBA’s best teams. The Nets will need to take advantage of an undermanned Rockets squad if they want to grab the victory.

Clint Capela is one of the NBA’s top centers, but Houston lacks depth behind him right now, with P.J. Tucker and Carmelo Anthony spending time at the five. Jarrett Allen has to get rebounds and muscle inside as much as he can, but even more important is for the other bigs, especially Ed Davis, to take advantage. P.J. Tucker isn’t some fast wing player who sizes down to play the five when the team goes small; he’s an older, slower guy at this point, so the Nets have the pieces to defend him.

If the threes won’t fall, get inside

As bad as Houston has been on both ends, they do hold opposing teams to just the 10th-lowest three-point field goal percentage. I don’t think that should deter Kenny Atkinson’s strategy, since it’s still early and there’s a lot of noise in stats like that, but if those shots don’t fall then the Nets should get inside, as Houston allows the third-highest two-point field goal percentage.

Jared Dudley has been really surprising, and you can never hate on Beef Jerky Joe Harris, but the Nets shouldn’t be afraid to use more of Rondae Hollis-Jefferson, to keep the ball in Caris LeVert’s hands, and to give Jarrett Allen more shots. Again, it may not be necessary as the Nets shoot really well from deep, but you’ve also got to take advantage of your opponent’s weaknesses, and so far for Houston that’s been defending inside the arc.

One trend I’m interested in is the use of Rondae Hollis-Jefferson at the five. With Jarrett Allen fouling out against Detroit, the Nets used a RHJ/Dudley frontcourt. It was cool and different and also it might not be working…

Rondae Hollis-Jefferson has played 23.4% of his minutes at center this season (-10.4 net rating).

But I wouldn’t be shocked to see Atkinson keep trying it, and I think there’s a way it can work depending on who is around him on the court. It could be a good thing to try when Clint Capela is off the floor.