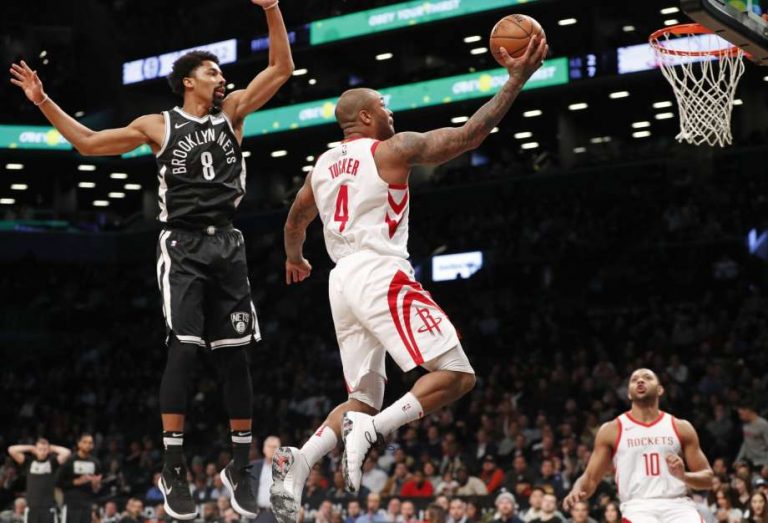 The Nets have been one of the form teams in the league over the last month or so. D’Angelo Russell has been ballin’ and the team’s depth has been on full display as they’ve encountered a tricky stretch with injuries.

The team looks to make it two wins in a row as they head to Houston to take on the red-hot James Harden and the Rockets. Here’s how they can find success away from home.

Over their recent hot streak the Nets have found a way to find success on the glass. Since December 7, they rank 4th in the league in rebounding percentage behind only the Nuggets, Jazz and Hawks.

The Rockets, meanwhile, are 22nd in the league in the same area and with the loss of center Clint Capela their struggles in that area show no signs of improving. In their first game without Capela, Houston’s two leading rebounders were guards in James Harden (9) and Gerald Green (6).

With guys like Ed Davis and Jarrett Allen at their disposal, the Nets should make a real point of focusing on the rebounding battle. Allen himself made note of that following the team’s win over Boston.

“I was (chasing rebounds). They didn’t really have the type of guy to go get every rebound down there, so I really made the extra effort to go get them.”

The Rockets don’t either so Allen should look to keep the same mentality against a similarly weakened front line in Houston.

Brooklyn has one of the most productive second units in the NBA. Coach Atkinson turns to his bench more than any other coach (21.1 minutes per game) and they repay that by producing the second most points in the league. Kenny remarked at the luxury of having so many guys who can step up following the Celtics win.

“I do think we’re deeper. But missing, you can argue, three starters, missing those guys and we’re still, even a win like tonight, it makes it kind of more special that we’re doing it with some really key, key players out and starters.”

With Houston being a notoriously shallow team that rely heavily on the talents of one man, Atkinson should look to weaponize his second unit to gain an advantage.

How do you defend someone as ridiculously offensively gifted as James Harden? The Nets have thrown plenty of curve balls at different teams and have been often heralded for their different schemes on either end of the floor, as Stevens mentioned pre-game before their matchup with the team.

“I said last week I don’t see how they don’t make the playoffs. They’re an excellent offensive team. I think they have a lot of versatility defensively.I think they’re superbly coached and they all know what they do and they do it every single night.”

It’s going to require not just quality coaching to curtail someone of Harden’s caliber. The execution by the players on the defensive end will need to be on point for all 48 minutes if the Nets have any hope of securing the win.

Perhaps we see something similar to curb Harden’s production. Whatever it is they throw at him, it’ll go a long way in determining the outcome of the game.