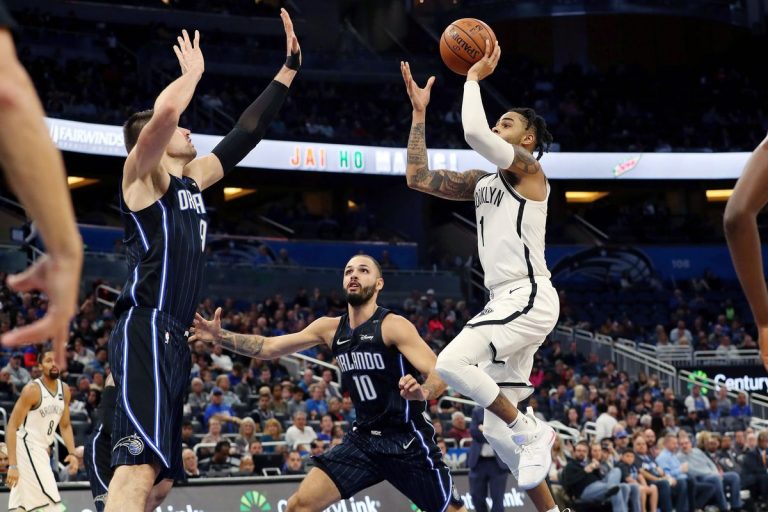 With D’Angelo Russell officially named as an All-Star, the focus for Brooklyn turns to Orlando as they head to the Amway Center for the second time this season. Russell was superb in that first outing and will no doubt be key again to securing the win. Here are some other keys to getting another victory over the Magic.

Free throws essentially cost the Nets in a tight tussle with San Antonio. If they hit just four more of them, they steal the victory. Coach Atkinson reinforced that notion post-game.

Brooklyn is on the road for the second game straight and will need to heed Kenny’s advice. The Nets are 8-10 when they shoot less than 70% from the charity stripe. Conversely, they’re 20-15 when they shoot 70% or more of their free throws. It’s not a massive discrepancy but still proof of the importance of hitting one of the most important shots in basketball.

Nikola Vucevic has been tremendous this season and his form has earned him a maiden All-Star berth. Alongside Vucevic the Magic have quality young bigs in Jonathan Isaac, Aaron Gordon and rookie Mo Bamba that could prove a handful for an undersized Nets outfit. Vucevic himself is eager to exact revenge on Brooklyn this time around.

In their previous matchup with the Magic, Joe Harris made a crucial defensive play in taking a charge from Vucevic. Harris provided insight into what will be required yet again as the Nets counter Orlando’s size.

“We call it the MIG actually. It’s the most important guy, so it’s the opposite wing defender, and I was just on the opposite block. That’s my rotation, just to step over, and I took a block away from Jay, so he would have been there if I wouldn’t have come over anyway.”

The improvements Brooklyn has made on the defensive end have to be largely credited to the emphasis the team has placed on the zone. Atkinson revealed how the Nets utilized it against San Antonio and a possible hint at how it will be implemented against Orlando.

“When we missed, we went back in man-to-man. Off makes, we’re in zone. We missed and they ran out and that’s kind of how they got downhill on us. I do think that zone was effective after makes. It kept them in front of us a little bit.”

Communication will be integral in staying on course on the defensive end. The Magic are an entirely different matchup to the Spurs, but the zone, and defensive communication in general will be important in obtaining the win.