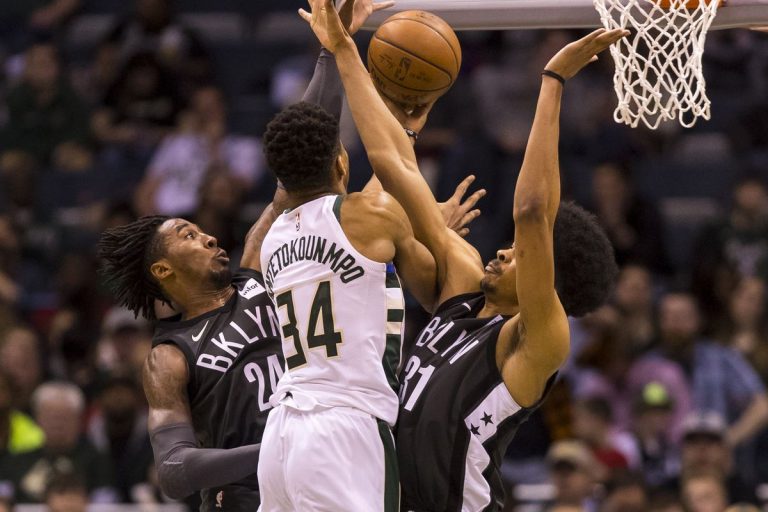 How To Net The W: Brooklyn Nets vs Milwaukee Bucks 2/4/19

For the first time since December 6, the Brooklyn Nets have lost consecutive games. Getting back on the winners list isn’t going to get any easier as they face the team with the best record in the league at home on Monday. Here are three ways that the Nets can reverse their losing fortunes against the Bucks.

Finding Offense Outside of Russell

All-Star D’Angelo Russell has been consistently great for the Nets over the past few months. Outside of him, the team seems to have hit a wall as the All-Star break approaches. The loss of Spencer Dinwiddie has exacerbated that even further as Russell divulged.

Shabazz Napier has been solid offensively, as has DeMarre Carroll. The likes of Rodions Kurucs, Rondae Hollis-Jefferson, and Treveon Graham have been inconsistent at best over the last few games. For Brooklyn to secure the upset win over Milwaukee they’re going to need a full team effort on both ends of the floor.

One way to increase the productivity on the offensive end is to focus on getting the assist numbers back up. While the Nets rank 21st overall in assists per game (23.5), since December 6 that number has risen to 24.6 per game. Atkinson reinforced the fact the ball movement needs to increase.

“I think the ball is sticking. That’s part of it. We addressed it at halftime, the slow decisions, not moving it as quickly as we should. We only had 23 assists tonight. The ‘play-with-the-pass’ mentality we normally have is not there right now.”

An emphasis on getting into their offensive sets quicker and making more selfless plays should help on that end as well. At the same time, the team does work best when attacking and putting pressure on the defense. The balance between penetrating and passing will go a long to determining the game’s result.

With Joe Harris listed as questionable, the Nets ability from the perimeter slips majorly. Harris is elite at shooting on the move as Coach Kenny told Hoops Hype.

“You scheme things for your players and what their strengths are. Joe has definitely improved coming off screens. We are close to the top of the league in off-ball screen [frequency] and it fits our personnel because of our shooters.”

Different schemes will need to be run and they’ll need to find offense in other areas if Lumber-Joe does happen to be out. Additionally, they’ll need to find a way of stopping Milwaukee’s hot shooting which is as dangerous as anyone’s in the league. 3-point shooting on both ends of the floor will be crucial for the Nets in getting the result they want.