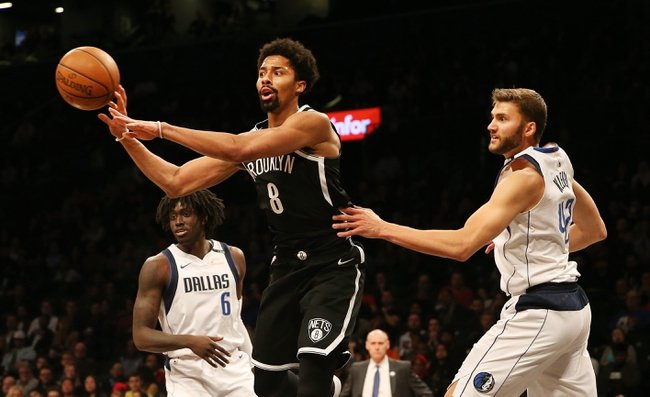 On Tuesday, the Nets beat the Miami Heat in Miami. The Nets are 8-10 on the season, and they’ve weathered the Caris LeVert absence about as well as possible thanks to the play of D’Angelo Russell and Spencer Dinwiddie.

On Wednesday, they head down to Texas for a game against the Dallas Mavericks. At 7-9, the Mavericks are exceeding some expectations (though as a DFW resident, I can say that they aren’t exceeding the incredibly high expectations put on them by the local radio stations before the season when Dallas was talked about as a potential playoff team.)

Dallas doesn’t have Dirk Nowitzki for this one, as the veteran power forward has still not suited up this season due to an ankle injury, but they do have highly touted rookie Luka Doncic.

So, what is this Dallas team all about?

Just, you know, solid guys. Aside from Doncic, there’s not some big star on this team. DeAndre Jordan is a good center, but we’re a little past the days of him being THE guy. Harrison Barnes is a good piece, but there’s a reason the Warriors viewed him as the most expendable piece when Durant became available. Dennis Smith Jr. has been the subject of a lot of is he good debates that seem to point towards yes, but it’s probably not a good thing that those debates had to happen. Dwight Powell is fun but is currently hurt. Wesley Matthews exists. Maxi Kleber has turned into some weird, shot-blocking machine — I was watching the Chiefs/Rams game at a bar and the Mavericks were on a small television in the corner and Kleber blocked one shot so hard that I stopped watching the football game and just stared at the replay.

But as a whole, the team doesn’t jump out at you. 17th in scoring, 22nd in assists, 18th in rebounds. Looking at the advanced stats, they’re 14th in offensive rating and 10th in defensive rating. They’re a very well coached team because of Rick Carlisle, who has them overperforming where they likely should be.

Also, Luka Doncic. He’s young and he’s going to be very good at basketball. He’s averaging 19.2 points per game, shooting 45.3 percent from the field and 37.5 percent from three, while also grabbing 6.8 rebounds per game and dishing out 4.1 assists. He contributes all across the board, and it’s a big part of why Dallas is playing better than their roster says they should.

What Carlisle says about the Nets?

Thanks to Brice Paterik of Mavs Money Ball, I had a chance to listen to Carlisle talk about the Nets after practice on Tuesday. Carlisle expects this to be a tough game due to the three-point shooters and the active bigs that the Nets have, and there’s also concern about being able to adjust so quickly to the change in styles from Monday’s game against the gritty and grind-y Grizzlies to the offensive-oriented style used by Brooklyn. Carlisle downplayed that, talking about how part of being an NBA team is that you have to make those quick adjustments, but I can’t help but wonder how Dallas moves from that Grizzlies game on to this one. Can Brooklyn get out running quickly and get an early advantage?

What do the Brooklyn Nets need to do?

How do you beat a team that beat Utah by 50, especially when that team is on a hot streak right now?

Well, I think it starts in two places. First, get the shooting edge. Both of these teams fire a lot of threes, but I’m of the opinion that this Nets team has better shooters than the Mavericks, which also seems to be true statistically. You need to shoot, you need to shoot often, and you need to convert those shots at a high clip.

The other thing? Stop the role players. Luka Doncic’s numbers don’t look that different in wins and losses this year, but J.J. Barea’s do, and Dorian Finney-Smith’s advanced stats do, and the Nets should try to attack the weaknesses in the Mavericks bench. And with Barea questionable, that could be an even easier job.