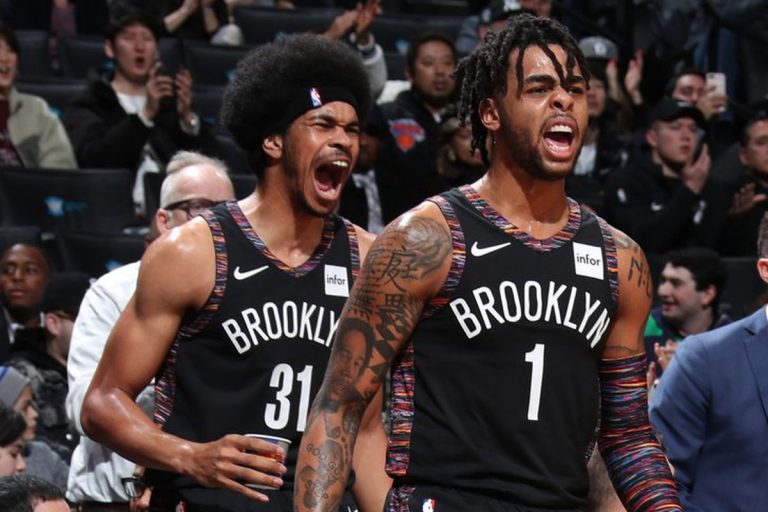 Welcome back to Oppo-Nets. Things are…less great in Brooklyn Nets world right now as Caris LeVert is injured and out, but the fact that his prognosis was better than expected is better than nothing.

As always, I got ahold of smart people who write about other NBA teams to ask them about the Nets upcoming opponents. This week, we have Brandon Johnson of All U Can Heat, Brice Paterik of Mavs Money Ball, Joe Hulbert of Canis Hoopus, and Jackson Frank of Liberty Ballers and The Athletic- Philadelphia.

Rodney McGruder has been a big surprise this year. Can he remain a key piece of this team for the rest of the year?

I’ve been so excited for McGruder through this first month. His development from a mere catch and shoot guy into a talented offensive weapon has helped tide Miami over while the team awaits the return of Dion Waiters and James Johnson. McGruder’s numbers have definitely cooled off a bit, down to 12 points per game when he was averaging 16 through the first five games of the year, but there’s no reason why he can’t be a staple in the rotation. He’s so talented at clogging passing lanes and rebounding considering his size that Miami would be remiss to push him aside once the lineup is back to full health.

Sometimes I forget that Justise Winslow is just 22 years old. How is he looking this year? What do you think his future with the Heat/in the NBA looks like based on what he’s shown so far?

That’s the key here, Winslow is just 22. Richardson, who spent four years in college is finally getting leaguewide recognition for his ability. Though Winslow is a different type of player and one who has to continue to work on high volume scoring if he’s to follow the Richardson path, there’s no reason he can’t be serviceable in a variety of lineups. Maybe it’s cliched to say, but he can guard all five positions, and he has been offensively flexible, picking up point duties as needed. The Heat seems to be still in the process of figuring out exactly what this team will look like in years to come, but Winslow should certainly be a big part of Miami’s growth.

These teams just played and the Heat won. Is there reason to expect different results this time?

Sure, Miami outplayed Brooklyn in the last game, but I wouldn’t write off the Nets just yet. Despite being somewhere in a rebuilding/development process, Brooklyn has shown that they can’t be slept on. Add to that the history Miami has with “playing down” to their competition and I’d say Brooklyn has as much of a chance to topple them this week as anyone else.

The Mavericks beat the Jazz by 50, right? I woke up the morning after that game and had a “whoa, what” reaction. Was it just an extremely bad night for Utah, or did it suggest a higher ceiling for this Mavericks team than people expected?

That Jazz game was a great win but most definitely an aberration. Rick Carlisle said to throw it out the window in the postgame press conference. The improvement from early season defensive struggles is legitimate, but they’re probably never going to beat another team by 50.

Luka Doncic is obviously going to be great, but what about Dennis Smith Jr.? How has he looked this year?

Dennis Smith Jr. has struggled a bit this season. Early in the season some of his decision making has been questionable but the biggest area of improvement has been his shooting. He’s not only shooting a better percentage (38% as of today) but he looks much more confident when he takes catch and shoot jumpers.

Who wins — Nets or Mavericks?

I think the Mavs will come away with the win against Brooklyn. It’s a must-win home game in the middle of a grueling November. If the Mavs want to even think about keeping out of tank mode they need to get that win against the Nets.

How has the post-Butler era been so far?

In honesty, I’ve been very surprised on the whole, but I’d use one word to describe it- fun. This team is playing at pace, jacking up threes and showing real intensity on defense. Robert Covington has been a lot better than I thought he was pre-trade, and his arrival has weirdly caused Tom Thibodeau to randomly start modernizing his defensive scheme. There will be more switches and more small ball lineups now, which is incredibly fun.

Let’s say Minnesota is able to turn it all around and make the playoffs. Which player outside of the KAT/Wiggins core and the new additions would be most likely to be the key reason why?

I think Covington is hugely important for the team going forward. We got an all-NBA level defender who has really lit a fire under his team-mates so far. Jimmy Butler’s leadership was pretty bad on the whole, Covington offers the same level of defense without the gigantic ego. In a way, he has inspired his team-mates by just doing his job and not talking too much. I think Covington’s arrival has modernized the team in a way, and I think the trade has just relaxed the entire atmosphere around the locker room. He also gives the Timberwolves a stable small ball four which will allow more shooters to be on the court.

These teams just played and the Timberwolves won. Any reason to expect different results this time?

The Nets are an excellently coached team with one of the best designed offensive schemes in the NBA, they are going to generate open threes regardless of how well you defend them. But I think the Timberwolves will just simply out-gun them. The performance of Jarrett Allen potentially throws a spanner into the works as he will defend Towns a lot better than Rondae Hollis-Jefferson did, but both Taj Gibson and Dario Saric can take advantage of the Nets notoriously small lineups.

Jimmy Butler is a Sixer! What does this mean for Philadelphia’s place in the Eastern Conference?

I think this puts them clearly in the race for the 2nd seed right now. I have Toronto a notch above the rest but there’s not a trio this side fo Golden State better than Butler-Simmons-Embiid. It will take some time to mesh but come April, that amount of star power is a serious luxury. Philadelphia now has a go-to perimeter scorer in the halfcourt and a guy who can lock down the opposing team’s best player. Those are two things they didn’t have before Butler’s arrival, as Robert Covington is an elite off-ball defender and merely above-average on the ball.

Wilson Chandler is in the Sixers starting lineup now that Covington and Saric are gone. Do you think Chandler is capable of being a positive contributor on both ends, or do the Sixers still have questions to answer about the four spot?

I think he’s less versatile defensively than advertised and has clearly seen his athleticism deteriorate in recent years but in a specified role where he fires catch-and-shoot 3s, attacks mismatches in the post and defends his own position well, he can be a positive contributor and not much more. He’s the fifth banana in the starting lineup and giving him a defined role should increase the odds of positive impact.

Who wins — Nets or Sixers?

Sixers. It’s not the second of a back-to-back this time or the 5th game in 7 nights. Brooklyn ran Philly out of town earlier this month and kudos to it but a rested Sixers team should win, especially against a Nets team sans LeVert.