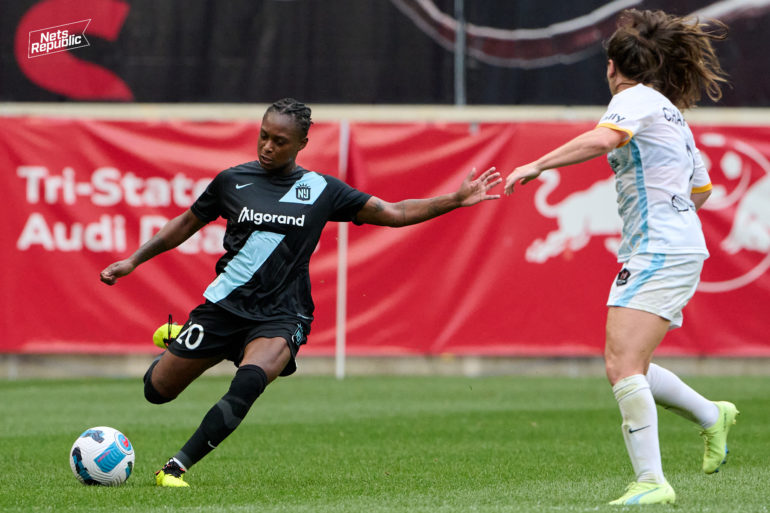 Gotham FC dropped their fifth straight game in a loss to the Houston Dash Wednesday night after a controversial red card put the NJ/NY side on the back foot. The 2-1 scoreline, however, somewhat belies the performance Gotham put together on the road, as the influence of interim head coach Hue Menzies became apparent in his second match in charge.

A chronic problem for Gotham this season has been a disconnection between the defensive and forward lines with the midfield, often resulting in bad giveaways in their own defensive third and disjointed play. But this was much improved Wednesday with both the insertion of Jennifer Cudjoe into the starting lineup and the concerted effort to get Kristie Mewis and McCall Zerboni on the ball more often.

The adjustments brought a more fluid football, a solid defensive shape, and a bit more threat in front of goal. Gotham notched 51 percent possession and eight shots with three on target for the match.

Following the match, Menzies said he was disappointed with the result but was proud of the desire the team showed on the pitch.

“I thought the effort was much better,” he said. “These kids are professionals. They’re showing me a lot more than I thought… and with the adjustments, they’re so receptive to everything that’s going on right now. I think it’s a little bit of a hunger for them to want to play a little bit better soccer.”

In the first half, in particular, it did seem as though Gotham were on their way to getting a result against the in-form Dash, whether it be a point or all three. Mewis and company were finding the Gotham forwards in better positions up the pitch, resulting in a couple of big chances that they just weren’t able to finish.

Their progress was stifled in the 58th minute when Margaret Purce was shown a second yellow card for encroachment on a Houston free kick and sent off the pitch. The yellow card was in line with the letter of the law, but a sending-off seemed excessive for the actual offense within the context of the match. Purce and her teammates protested furiously, but referee Alex Billeter waved them off and presented Ifeoma Onumonu with her own yellow for dissent.

“The situation is not harsh so I just felt the referee should have gone over and said, ‘Hey, Midge, you got to step back.’ But we’re playing away, so it is what it is,” said Menzies. “The red card hurts for us [because] we had a little momentum. But at the end of the day, we showed a lot of resilience with 10 players and it was an early red card in the half.”

For the first 15 minutes after the red card, Gotham maintained their composure and were still able to play their game. But during a four-minute defensive lapse, Houston were able to put two goals past Gotham in quick succession.

The first goal came from Ebony Salmon in the 73rd minute. Maria Sanchez sent a cross into the Gotham box and Mandy Freeman mistimed her clearance, allowing Salmon to have a clear shot on goal. Betos managed to get a hand to it, but the shot ricocheted off the crossbar and over the line.

Just four minutes later the Dash were building around Gotham’s box again. This time the backline failed to close down Marissa Viggiano, who was able to place a well-struck ball into the far post.

Gotham have been prone to dropping off after conceding this season, but on Wednesday the team did not hang their heads and accept the result. After pushing forward, they earned a free kick outside the box. Zerboni then managed to get on the end of a dangerous free kick from Mewis and got one back for Gotham.

It turned out only to be a consolation, but for a team that has failed to muster any comeback victories this season, it showed a new resolve. Following the match, Paige Monaghan noted it was frustrating to lose an even match but said that the team has to separate the result from the performance.

“I think we have to have that outlook in this moment,” said Monaghan, who came on as a second-half substitute. “We’re not saying, ‘Oh, yay, we lost 2-1.’ We’re not satisfied with that, obviously. But we have to learn from every single game. This is a hard time, but we have to get through it.”

Monaghan credited Menzies with the team’s improved performance and said the interim coach is helping to put them at ease and simplify the game for them.

“Hue has definitely brought in a new look to our team, just really nailing down our possession as a team and finding our valuable players,” she said of his influence. “We’ve been lacking a connection out there and I think we just want it so bad that sometimes we force things to happen. So Hue is really letting us enjoy the game, value the game, and value whatever role we’re in. And I’m just grateful that he’s here and that we’re gonna play the game of football again.”

Unfortunately for Gotham, Purce’s red card will continue to trouble the team. She will have to sit out of Saturday’s match against Orlando, leaving them without a key player. Still, Menzies said he believes the squad will be OK moving forward as they regain confidence and belief in their game.

“I want this to continue the energy that they have, and I think they’re good footballers. And that’s what I keep stressing to them — you can play, you can play the way the game requires you to play,” he said. “And they’re realizing it.”