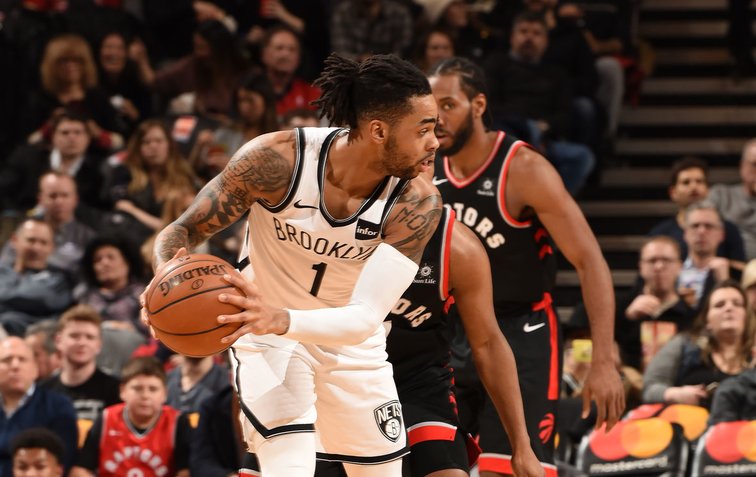 Division Play a Plus For Nets This Season

The Nets are enjoying their best season under head coach Kenny Atkinson and their best season in general over the last 3 years. They’ve already surpassed their win total from last season of 28 and currently sit in 6th place in the East, smack in the middle of the playoff race. One of the areas they’ve shown vast improvements in is their play within the division. Heading into the All-Star break, the Nets are 7-6 in division play. This is more wins within the division than the team has had over the past 2 years combined. The last time the Nets had 7 or more wins within the division was the 2014-2015 season. With only 3 games against the division left, I’ll recap how they’ve fared against each team so far as well as give some insight on what Brooklyn could look forward to in a potential playoff matchup with one or more of these teams.

The Nets and Celtics will forever be linked to one another due to the infamous trade Billy King made. However, it’s hard to imagine that just 5 years later the Celtics and Nets would be right next to each other in the standings, both en route to make the playoffs. So far the Celtics have the lead in the season series. In their 1st matchup, the Nets almost blew a huge lead at home but were able to hold on 109-102. It was a game the Nets dominated throughout until the 4th quarter where Boston cut the lead down to as little as 4 points. Their next two matchups both took place in Boston where the Celtics took both matchups. Rodions Kurucs scored his career high of 24 points in the first meeting up in Boston.

With the way Boston is playing it seems like they’ll hover between the 3-5 seeds barring an insane run. They weren’t big players at the deadline but are still a dangerous team when clicking on all cylinders. The Celtics proved they could handle themselves in the playoffs as they made it to the Eastern Conference Finals. And that was without Kyrie Irving and Gordon Hayward. An even more experienced Celtics team could be a real problem for any team come playoff time. Even though every matchup in the playoffs is a challenge, Boston is one that could pose a huge uphill battle for the Nets. They have firepower all through their lineup and can really clamp down on the defensive end. It’s going to take some big games from guys like D’Angelo and Dinwiddie for the Nets to make it a competitive series.

Although the 76ers hold the 4th best record in the East, the Nets have had pretty good success against Philadelphia. They currently hold two wins over the Sixers but it should really be 3. In the team’s first meeting the Nets completely embarrassed Philly at Barclay’s Center. Brooklyn won by 25 points and it was over from the jump. The second meeting happened again at Barclay’s Center with the Nets taking another big lead. However, they weren’t able to hold it and clutch fade-away 3 pointer by Jimmy Butler in the final seconds gave the Sixers the win. Their third meeting was a close one that came down to the wire. Spencer Dinwiddie had his big coming out party as he dropped 39 off the bench to help the Nets squeak out a 3 point win 127-124. The two teams will meet one last time in late March.

The Sixers made a huge splash at the trade deadline when they acquired Tobias Harris from the Los Angeles Clippers. Harris, who is a free agent at the end of the season is someone whom the Nets had on their radar to sign in free agency. Harris adds some more offensive firepower to an already stellar starting lineup for Philadelphia. The Nets could possibly see the Sixers in a 3 vs 6 matchup in the first round. Although Philly’s starters pose a big threat, the Nets bench could play a huge factor in that series. Especially guys like Dinwiddie and Napier who can abuse their matchups on the other side. The Nets 3 point shooting will also play a big role in a series with the Sixers.

Ever since the Nets defeated the Raptors in the playoffs back in 2014 they have had very little success against them. Earlier this season the Nets snapped their eight game losing streak against the Raptors as missed Fred Van Vleet 3 pointer as time expired gave the Nets the win. That win was the beginning of the great stretch of basketball the Nets have played over the last two months. In their next matchup which was up in Toronto, the Nets started off well but were blitzed in the 2nd and 3rd quarters and never recovered, losing by double digits. Their most recent matchup came down to the wire again but a late jumper by Kawhi Leonard sealed the Nets fate. The teams will face each other one more time later this season in Brooklyn.

As it stands now the Raptors will likely be a one or two seed. Unless Brooklyn falls below the sixth seed, they wouldn’t face the Raptors until at least the 2nd round. Brooklyn has played Toronto fairly tough this season and a playoff series between the two would be nothing short of competitive. The difference maker is definitely Kawhi Leonard as he poses a threat on both ends of the court. Toronto’s also has depth on their bench and the addition of Marc Gasol strengthens their starting lineup even further. It would take an all-out team effort by Brooklyn to net a series win against the Raptors.

Before the season started Spencer Dinwiddie and former New York Knick Enes Kanter engaged in some banter on twitter where Spencer responded to a claim made by Metta World Peace before the season saying the Knicks would play the Pacers in the playoffs. Dinwiddie said that the Knicks weren’t even the best team in New York.

🤣 The @nyknicks!? My guy can’t be serious they’re not even the best team in NY. https://t.co/DMvMuvMspx

Well, the Nets have made true on that claim this season based on their overall performance and the head to head matchup. The team went 3-1 against their crosstown rivals. The 1st matchup was a nail-biter with Caris LeVert hitting the go-ahead bucket in the final seconds. The second matchup saw the Nets get completely blown out at Madison Square Garden 105-96. The Nets would go on to win the next 2 games against the Knicks thus winning the season series. As it stands right now the Nets are the best team in New York however this offseason could totally shift the balance of power one way or another.