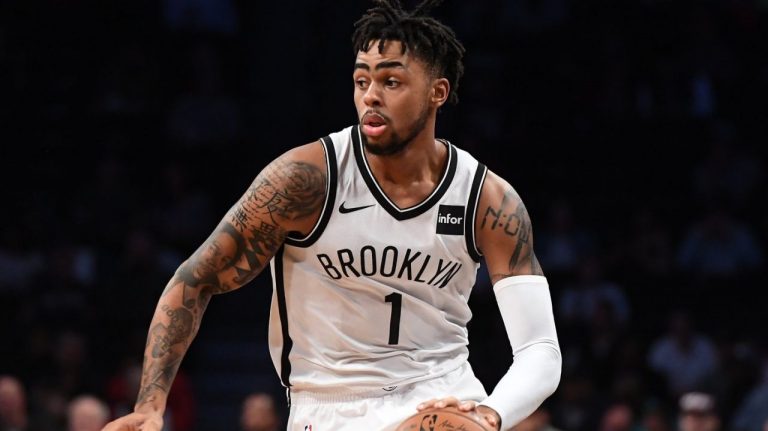 D’Angelo Russell arrived in Brooklyn eager for a fresh start. His time with the Los Angeles Lakers was wasted, and now the former lottery pick is in a position to capitalize on his boundless potential. Magic Johnson traded D’Angelo Russell along with Timofey Mozgov on June 22, 2017, making room for Lonzo Ball to take control of the team. In return, the Lakers received Brook Lopez and the draft rights to Kyle Kuzma. Russell’s season was cut short thanks to injury, but his talents are still undeniable. In him, Brooklyn has a potential star and franchise cornerstone.

He’s an electrifying playmaker whose offensive game will only continue to broaden, and that kind of dynamic was missing from the Nets’ rebuild.

In 48 games, D’Angelo Russell averaged 15.5 points, 5.2 assists and 3.9 rebounds (the latter two being career-highs) while shooting 41.4 percent from the floor. He piqued interest almost immediately. Russell poured in 30 points against the Indiana Pacers on opening night, a spectacular display of his versatility as a shot creator as well as someone who can dance around screens without the ball. In the following weeks, he had 29 points against the Orlando Magic, 33 against the Phoenix Suns and 26 against the Utah Jazz. It was a glimpse of what Russell could do with freedom, something not provided to him in Hollywood.

There was then a game on March 13 against Toronto when Russell exploded for 32 points and dropped in threes like he was throwing rocks off of Coney Island’s pier. We also can’t forget his 18-point, 13-assist, 11-rebound triple-double back on March 23.

The common thread between those games was that Russell thrives in a run-and-gun style. His consistency will come later. To continue to build this foundation, though, it’s critical that he shows some semblance of stability and understanding in his role.

Most of those performances, unfortunately, came before knee surgery that kept Russell on the sideline from November 14 to January 17.

Even after being activated, Kenny Atkinson eased him back into the rotation, the appropriate course of action when a player is coming off of a severe injury. To say there were struggles would be an understatement. In Russell’s first three games back he totaled 11 points. It was apparent that both his explosiveness and shooting touch had faded during his time off.

Arguably his worst showing of the year came post-injury. On March 16, a 120-116 loss to the Philadelphia 76ers, D’Angelo Russell was a miserable 3-for-14 from the floor and recorded just eight points in 27 minutes. The lack of scoring wasn’t the issue; we had seen that before. But the volume didn’t do anyone any favors. He, however, would bounce back and score at least 10 points in 11 of his 13 final games.

Since Russell has to maintain a considerable load on offense, his defense is going to suffer. This is nothing new. He wasn’t a good defender in Los Angeles or at Ohio State. He’s not quick laterally and doesn’t boast tremendous length, but quick hands and anticipation help him pick a steal or two every so often. Fortunately, D’Angelo Russell is far from the worst defender in the league. Basketball Reference uses a metric called Defensive Box Plus/Minus that estimates a player’s production on a per 100 possession basis and compares it to the league average, which is zero. Russell stands at minus-1.2. That’s not terrible, but he won’t be making any All-Defensive teams.

Unlike the Lakers, Brooklyn seems disinterested in putting D’Angelo Russell is situations where he can’t succeed. It’s comforting to see an organization find a player who could turn into a star in their system, which they can then use as a selling point to other budding stars.

Russell has posted on his Instagram story a few hangouts with Devin Booker, the star shooting guard for the Phoenix Suns. It’s highly unlikely the two team up in Brooklyn, but it’s fun to speculate about the Phoenix Suns wallowing in the cellar of the NBA and Booker just getting fed up with them. After all, it’s 2018. And conspiring after seeing a 10-second clip helps prevents the offseason from stagnating.

The 2018-19 season is a contract year for D’Angelo Russell. Brooklyn owes him $7 million after picking up his team option last October. Hopefully, he plays well and the Nets do everything possible to keep him around longer. The most prominent question, of course, concerns money. But if Brooklyn believes he’s their franchise player, there’s no reason for them not to give Russell a healthy salary.

Russell has some areas to improve before his status as a star is justified. The biggest is shot selection, an area where most young players struggle. Russell had a brutal year from the perimeter (32.4 percent from three on 5.8 attempts) and often settled for long jumpers. His ability to create off the dribble is too pronounced for ill-advised triples. Once he figures that out, limiting turnovers is crucial. He averaged 3.1 giveaways a night, either from poor decisions or bad passes.

D’Angelo Russell had a solid campaign. He wasn’t consistently fantastic or atrocious. But he’s still young and struggled with a major injury. Those two factors had an impact on his play, but the flashes are too bright to ignore. I feel comfortable giving Russell a B for this campaign, and there’s still an abundance of room for him to improve.