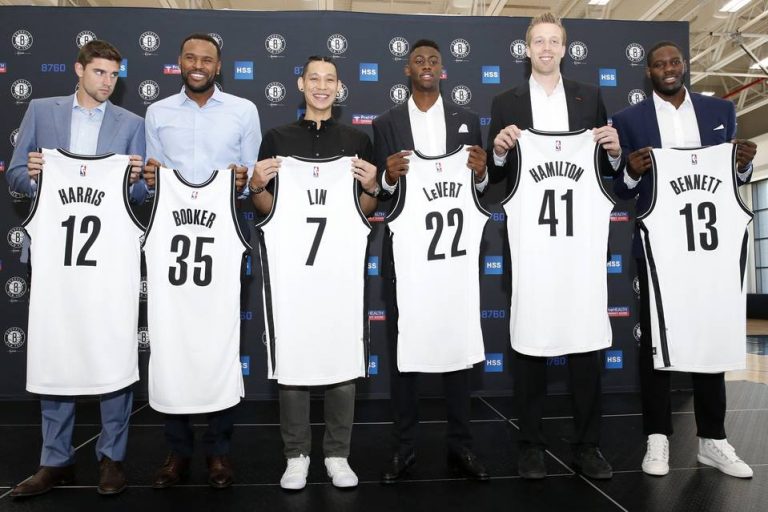 One year ago at this time, the Brooklyn Nets were a franchise with a regrettable past and a doomed future. However, the appointment of Sean Marks as the team’s GM in February this year turned the entire picture upside down. All of a sudden, the Nets started moving towards a single operational plan. Marks made a couple of important moves early on in his tenure, waiving past-their-prime players for some salary cap relief. Still, this summer was the first true test of his mettle. So, how did he do?

He started off by trading Thaddeus Young to the Indiana Pacers, getting the 20th pick of the 2016 draft and a future second round pick in exchange. Much like Andrea Bargnani and Joe Johnson before him, the 28-year-old Young was of no use to a team at the start of its rebuilding stage. Unlike those players, however, he still had some trade value in the league. Obviously, two middle-of-the-road draft picks may not seem like much of a return for a proven NBA commodity. Still, a franchise that has effectively been kicked out of the lottery will take whatever it can get. With their 20th pick, the Nets took a flyer on Caris LeVert, a potential star with a discouraging injury history. By drafting LeVert, Marks has shown he’s fully aware of the precarious situation the Nets are in. If your team needs quality players, gambling on potential is the only correct course of action.

As soon as free agency opened on July 1, Sean Marks went to work. By the end of that first day, the Nets were stronger for a bonafide star in this league – Jeremy Lin. Fortunately for the Nets, there were many reasons for Lin to want to return to the place of his triumph. Getting to be the main man for the first time in his career is a big one, but reuniting with Kenny Atkinson was probably another huge factor in his decision. It’s worth noting that Lin gave the Nets a big discount by accepting a three-year, $36 million deal. By doing so, he further improved the team’s salary cap situation and let the Nets know he’s a team player.

The Nets followed up the Lin acquisition by adding depth to their lacking frount court. They did so by signing Trevor Booker and Justin Hamilton to two-year deals, at very reasonable rates. The fact the Nets reached out to them so quickly implies they were fairly high on Atkinson’s wish list. They both look set to be important rotation pieces for the upcoming season. Booker seems penciled in as the starting power forward, while Hamilton will be the main backup to Brook Lopez.

After these early moves, Marks started getting aggressive. During the next few days, the Nets made offers to two young restricted free agents, Tyler Johnson and Allen Crabbe. This is not a common strategy nowadays, mostly due to the fact that the original team has seven days to match the offer. During this time, the team that made the offer will have their cap space tied up. The Nets thought they could avoid this by being generous, offering $50 million to Johnson and $75 million to Crabbe.

Unfortunately for the Nets, both Miami and Portland decided to match the offers. Still, the fact that those player signed the offer sheet and both teams refused to give up their youngsters suggests that Marks was on the right track. When the details of the Nets’ offer sheets to Johnson and Crabbe were announced, neither of them was seen as worthy of that kind of money, even with the new salary cap. Most analysts agreed that the Nets were overpaying them in order to get them to sign on the dotted line. And yet, their original teams decided to keep them. At the very least, the scouting process seems to have improved under the new regime.

Following this turn of events, Marks wasted no time in proceeding to Plan B. In the next couple of days, the Nets acquired Greivis Vásquez, Luis Scola, Joe Harris, Anthony Bennett and Randy Foye. They also signed Yogi Ferrell, Beau Beech and Egidijus Mockevicius to partially guaranteed contracts. All the players involved were signed to one and two-year deals, highlighting Marks’ desire to stay flexible and keep the money for the upcoming 2017 free agency. The Nets won’t reach the spending floor this season, but Marks has been clear in saying that doesn’t bother him.

Though the new additions are mostly there as a stopgap, they all have certain qualities that can help the team. The signings can be divided into two groups: proven veterans and promising youngsters. This roster needs both groups, but for vastly different reasons. The veterans are there to stabilize the locker room and provide leadership, while the younger guys will have to prove they have what it takes to make in the league.

As the summer nears its end, it might seem like the Nets could have made a bigger splash. Still, considering the circumstances, it’s hard to believe Marks could’ve done a better job. Honestly, the franchise’s only real misstep during the past month is probably the team’s new promotional slogan. “We Came to Play” sounds an awful lot like just being happy to participate. In our opinion, changing it to “We Come to Play” would paint a more dangerous picture. Still, if the new slogan counts as the worst thing you’ve done this summer, you’re in a good place.

With just seven players under contract after this season, the Nets look to be one of the richest teams in the 2017 free agency market. If the current cap projections are true, Marks will have around $40 million to play with. The only real issue he will have to deal with until then is what to do with Bojan Bogdanović. He’s entering the final year of his contract, and the Nets will probably want to see how he fares in a starting role before coming up with a plan for him. He is a valuable trade chip, and Marks is probably wary of the possibility of getting nothing for him. Of course, in a year or so this will probably seem like a minor concern. And for the first time in many years, the future is looking bright for the Nets.