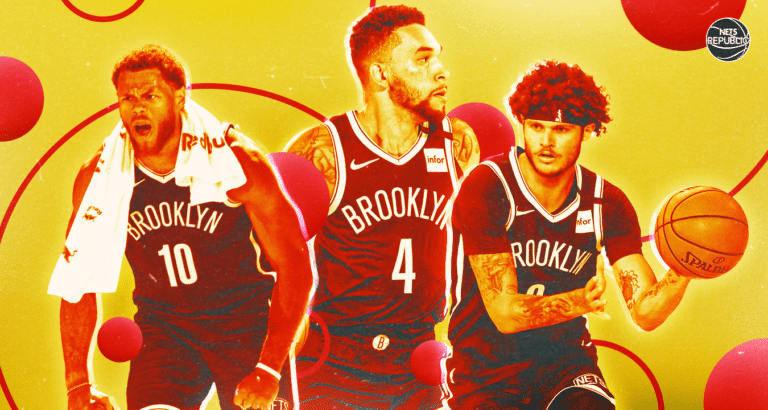 Bubble Nets: Breaking Down Who Stays and Who Goes

It’s been a little over a month since we’ve seen the lovable bunch of misfit toys we came to know as the “Bubble Nets”. A team that came into the Orlando Bubble missing five players from the regular rotation. Nobody gave this group a chance as it seemed as if the Nets were picking up guys off the street to play and fill the roster. I mean I even volunteered as tribute to suit up.

Perhaps Sean Marks just didn’t see my offer as he went in a different direction with roster spots. Nonetheless, most had Brooklyn going 0-8 and falling out of playoff contention. Some NBA writers and TV personalities called the roster an embarrassment. But this group rallied together and pretty much shocked the world going 5-3 in the restart games, highlighted by a victory over the Milwaukee Bucks without the services of Caris LeVert, Joe Harris and Jarrett Allen.

The Bubble Nets will certainly not be the squad Brooklyn rolls out whenever next season begins. And while some players stood out during their time in the bubble and made a case to be on next season’s opening night roster, others did not. Here’s a breakdown of who does and doesn’t have a case to be back with Brooklyn next season.

The muscle of the Bubble Nets, Justin Anderson quickly became a fan favorite this summer due to his won’t back down demeanor. He didn’t provide too much on the offensive end, however, shooting a lackluster 26.3% from the field including 20.7% from three-point range. This included a game in which he shot 1-15 from the field and 0-12 from deep. But there were some highlights as well. The biggest coming with Anderson’s thunderous dunk over MVP Giannis Antetokounmpo.

Although Anderson provides that grit and toughness every team needs it would be an absolute shock if he is back on the Nets next season. He deserves a place on an NBA roster somewhere though.

The lovable Chris “Cheese” Chiozza became a Nets cult favorite after his short tenure with the Nets during the regular season before COVID-19 put the season to a halt. The Orlando Bubble was seen as an opportunity for Chiozza to prove the few games before the halt weren’t just a flash in the pan. His performance in the bubble however didn’t go as planned. It was evident quickly Chiozza was not a starting caliber guard. There were times he seemed shook and unconfident, especially when it came to shooting the ball. On numerous occasions, Chiozza would turn down a wide open three with no one within 6 feet of him. And the rare times that he did shoot them, they barely went in.

At once thought to be a difficult decision to bring back for next season it’s looking more and more like Chiozza will be on someone else’s opening night roster come next season if not back in the G-League. That’s not to say Chris doesn’t have a place in this league because he does. But after being outplayed by Tyler Johnson throughout the bubble, it’s more likely the Nets will go with the veteran Johnson if they do decide to keep players from this bubble roster.

A roster move that sent NBA Twitter into a frenzy, it finally put to rest all the “Jamal Crawford is a bucket, why is he not an NBA roster??” Tweets and video montages. The payoff however was, let’s say, underwhelming. After popping up on the Nets injury report throughout the first few restart games with a “conditioning” tag, Crawford made his much-anticipated debut against the Bucks. But it was short-lived as played six minutes, scored five points, and then left the game with a hamstring injury never to be heard from again. Okay, that might have been a bit much but Crawford never saw the floor again for the duration of the Nets in the bubble. He did however provide a strong veteran presence and leadership with this group, especially with fellow Michigan alum Caris LeVert.

While Crawford may not have a role in the rotation it is very plausible to think he will be on this Nets team come next season. The Undefeated’s Marc J Spears reported the Nets are “expected to re-sign” Crawford. Kevin Durant has also showed support in bring Jamal back. While on The Joe Budden Podcast Durant said he didn’t know if Jamal would want to play again but also added “I would love to have him on the team, but I don’t know”. This bodes well for Crawford as a Kevin Durant co-sign is as good as anything. It also bodes well for the Nets if he is on the roster as every championship team has that veteran presence in the locker room. We’re seeing it in this year’s playoffs with guys like Miami Heat’s Udonis Haslem and former Net Jared Dudley on the Lakers.

Signed to essentially be the backup center, Donta Hall saw action in eight total games while in the bubble. The 6’10 Hall was a standout this season in the G-League getting G-League All-Defensive team and All-Rookie team honors. While in the Orlando Bubble Hall gave great energy off the bench, but unfortunately for him, there is just too much depth in front of him. Entering next season the Nets should have DeAndre Jordan and Jarrett Allen (barring him being traded) as their two big men on the roster. With the Nets in win-now mode, it’s a safe bet they won’t be bringing Hall back.

Easily one of the nicer surprises for the Bubble Nets, Tyler Johnson looked very much like the guy Sean Marks at one point had offered $50 million to in free agency a few years ago. Johnson provided a much-needed scoring threat off the bench for Brooklyn and even started a few games as well. During the eight restart games, Johnson averaged 12.0 ppg and 3.0 apg in just over 24 minutes. Johnson also shot a solid 38.9% from deep. His scoring increased as well during Brooklyn’s four playoff games and was actually Brooklyn’s third-leading scorer at 13.8 ppg.

Seen as a skeptical signing by many, Johnson has proven he deserves a spot on this roster. With all the trade talk involving Spencer Dinwiddie the past few months, Johnson could see himself as the Nets’ backup PG. Even if the Nets do execute that fabled Jrue Holiday trade, Johnson can still be seen as someone who should be granted a spot. Taking into consideration the injury history of Kyrie Irving it’s imperative Brooklyn have depth at the guard position. This was evident by the atrocities Nets fans witnessed this season when both Kyrie and Caris LeVert were hurt. It also helps that Johnson outplayed Chris Chiozza who many thought was a lock for a roster spot at the start of the bubble.

A two-way player for the Nets, Martin showed some promise in the five NBA restart games he played in. On two occasions he even dropped 20 points, with a 24 point effort coming in a win against the Magic. What was great about Martin in the bubble was his efforts on the defensive end. Although he only stands at 6’2, Martin is a pesky defender that isn’t afraid to get in the chest of his opponent and frustrate them. Much like Chris Chiozza, you would be hard-pressed to think Martin is on this roster come next season. Brooklyn did sign him to a two-year two-way deal back in January so it’s possible we may not have seen the last of Martin in a Brooklyn jersey.

There’s not much to say about Lance Thomas honestly. Thought to be someone who could be of use for Brooklyn in the bubble due to his size and ability to stretch the floor with his shooting, he was painfully underwhelming. His position on the team became more of a depth reason than anything else. There is no way the Nets bring him back next season.

For context, these are all of the players who are not under contract with Nets entering the offseason with the exception of Joe Harris