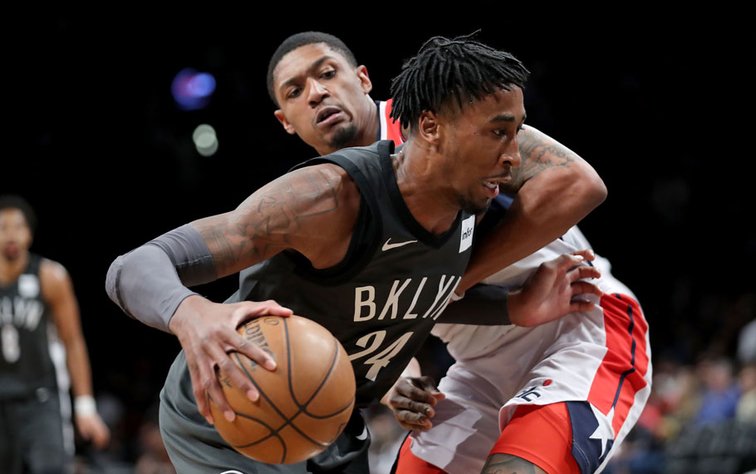 Well… that’s quite a way to break a four game skid, huh? After the Brooklyn Nets’ interior defense got cheese-grated over and over again in the post-Trevor Booker era, the Nets avoided such a fate and then some in a 119-84 purging of the Washington Wizards from Barclays.

The Wizards definitely aided matters by not utilizing Marcin Gortat or Markieff Morris to bludgeon the Nets in the paint. But, regardless, Brooklyn had a spectacular effort on the glass with a whopping 60 to 35 victory in the rebounding margin. Hopefully, the Nets can keep that same energy while going to play on the road for the second leg of a back-to-back. They’ll face an Indiana Pacers team that has been un-guardable for the Nets thus far this season.

RHJ, Have a Day

It’s probably safe to say Rondae Hollis-Jefferson: Offensive Weapon is a reality for 2017 and beyond. In just 24 minutes of action in the blowout, RHJ contributed 21 points, 11 rebounds and six assists as if he downloaded Nikola Jokic’s skill package before the game.

Confident and aggressive RHJ remains a blast to watch. Coincidentally like the aforementioned Jokic, RHJ constantly backs defenses onto their heels with quick decision-making. That has made a world of difference in his ability to generate scoring chances.

RHJ currently has the same free throw rate as Giannis Antetokounmpo while maintaining a career-high usage over 20 percent. Better yet, as the six assists from the blowout win hint at, RHJ has done well to not just use quick decision-making for his own looks at the basket, but to also pass the ball well. Perhaps more impressively, he has done so without frequent turnovers in Atkinson’s system. Applaud RHJ for the hard work he has put in to cultivate such a basketball intelligence despite his inability to provide spacing with a three-point shot.

The Hard Truth About Dinwiddie

Spencer Dinwiddie again continued to add impressively to his breakout season resume with 15 points on 5-of-7 shooting and 4-of-5 from beyond the arc in 22 minutes. According to NBA.com’s Synergy data, Dinwiddie currently perches in the top 25 of players with the most usage of their possessions on isolation plays; yet he also currently scores more efficiently on those isolations than over 80 percent of the league, a status only shared by LeBron James, Chris Paul and James Harden.

Dinwiddie has been a gem as the Nets’ makeshift primary ball-handler after Jeremy Lin and D’Angelo Russell’s injuries. He plays with the poise and patience of Hall-of-Famers, even if not quite skilled enough for the lofty future accolade.

Dinwiddie still has one of the best NBA player Twitter accounts in the league. Everyone should love Spencer… but the Nets should seriously consider shopping him to other teams before the trade deadline passes in February.

With Dinwiddie joining the Nets on a non-guaranteed deal last season, Brooklyn maintains control of his contract until after 2018-19. By then, the Nets will also importantly have the Bird rights to Dinwiddie’s contract. This would be unavailable to any team that decided to trade for Dinwiddie before then. However, Dinwiddie could seriously be in line for an eight-figure contract by then if his play at all keeps up.

Russell is in line for restricted free agency in that same offseason. There have been no indications yet that the Nets won’t prioritize him over Dinwiddie. Dinwiddie has played well enough and probably comes on enough of a discount where prioritizing Russell for potentially a $20+ million a year contract seems questionable at least. But, reality is reality. Also, with Lin likely to take the player option for next season, Dinwiddie likely plays as a backup to the two bigger-named guards in 2018-19, only with likely diminished value.

So the question is should the Nets maximize Dinwiddie’s current buzz to sell high to a playoff contender needing a versatile bench ball-handler if the price can net Brooklyn a good first-round pick? Both sides of the argument can be understood. As of now, any worries of Dinwiddie crashing in impact are slightly mitigated by how he’s currently not even shooting that well. Dinwiddie makes his bread on patience and poise, and those are not streaky attributes.

But, does the Nets’ front office see him the same way? If they don’t see Dinwiddie’s performances as worthy of earning his way into the future plans of Brooklyn, making him one of the most attractive trade chips on the market may make the best of the scenario unfortunately.