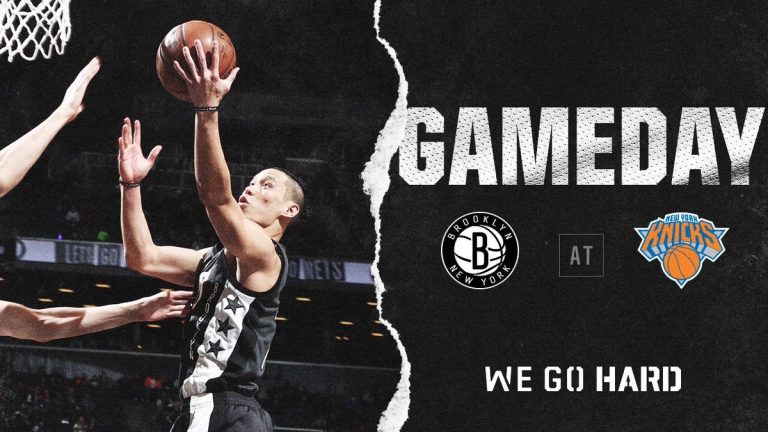 After one of the craziest offseasons in NBA history, the NBA preseason is finally upon us. With the 2017-18 regular season just over two weeks away, the preseason itself is shorter than ever before. The Brooklyn Nets only have four preseason games this year after six last season. The shorter preseason is good for players and fans in the long run, but the compressed preseason will make each contest more important.

The Nets made some dramatic changes this summer. However, none of Brooklyn’s moves altered the franchise as much as the Carmelo Anthony trade altered the Knicks. Here is a preview of the crosstown battle to open the Brooklyn Nets’ preseason.

The Nets struggled with their starting backcourt for much of last season due to Jeremy Lin‘s hamstring injury. This season, however, their starting backcourt should be the team’s greatest strength. Kenny Atkinson may opt to start newcomer Allen Crabbe at shooting guard, though the wing is currently sidelined with a sprained left ankle. For now, Jeremy Lin and D’Angelo Russell will probably share the backcourt duties. Russell has the size and shooting touch to play at the two, and Lin played at off-guard regularly, as recently as two seasons ago in Charlotte. Their ability to play together in the backcourt will be crucial to Brooklyn’s future and should be the main focus of Nets fans.

The New York Knicks have an entirely different situation. Tim Hardaway Jr. received one of the most heavily derided contracts of the offseason, but he is still at least a capable offensive player. Their point guard rotation, on the other hand, is the worst in the NBA outside of Chicago. Rookie Frank Ntilikina is a long-term project; Ron Baker is overpaid on a two-year, $9 million deal; and Ramon Sessions was atrocious last season. The backcourt battle will be Brooklyn’s easiest path to victory in this game.

The biggest hole in this Nets’ roster is clearly at center. After years of center being the only locked-in starting spot on the team with Brook Lopez in the fold, that starting spot is wide-open this season. Kenny Atkinson has certainly had some interesting thoughts on that position since Media Day:

Kenny Atkinson said he could see DeMarre Carroll playing PF and Rondae Hollis-Jefferson at C despite 6-7 ht because of 7-3 wingspan. #Nets

While playing Hollis-Jefferson at center is an intriguing concept, Brooklyn will probably not roll that lineup out to start this game. However, they should still opt to play Hollis-Jefferson at power forward and Caris LeVert (when healthy) at small forward, given how successful they both were at those respective positions down the stretch of 2017-18. Timofey Mozgov is penciled in as the starting center by default, but Atkinson might look to start Jarrett Allen, given his recent medical clearance.

The Knicks lost a huge piece in their frontcourt with the Carmelo Anthony trade. However, they still have the best frontcourt player in this particular contest in Kristaps Porzingis. Given Brooklyn’s issues up front, Porzingis is a matchup nightmare — Hollis-Jefferson is too short to guard the 7-foot-3 Porzingis’ jump shot, and Mozgov is simply too slow. The Knicks may opt to start Enes Kanter at center, but Hernangomez is probably a better fit for the starting lineup. No matchup is anywhere near as favorable as the advantage that Kristaps Porzingis will have on the inside.

While the battle between the starting lineups should be pretty close, the Brooklyn Nets have a massive depth advantage. DeMarre Carroll struggled to live up to his contract in Toronto, but he and Atkinson worked well together in Atlanta.

Carroll may be in the starting lineup to start the season. If he starts, LeVert is massively overqualified as a sixth or seventh man. Isaiah Whitehead struggled at times as a starter last season, but he will have a major advantage against whoever gets minutes for the Knicks at backup point guard. Spencer Dinwiddie is a bottom-tier starter at point guard but is massively overqualified for his current role as a projected fourth guard. Quincy Acy and Jarrett Allen should also see minutes in what will be a crowded rotation.

On the other hand, the Knicks’ bench consists of Enes Kanter, Courtney Lee and… not much else. Rookie Frank Ntilikina will likely struggle to start his NBA career, and his first preseason game could be tough sledding. Mindaugas Kuzminskas is decent offensively but a trainwreck on defense, as is Michael Beasley. Kyle O’Quinn is maddeningly inconsistent, and everyone else is either injured or unproven.

The starting lineups for these two teams could play each other to a draw. The backcourt matchup is a solid advantage for the Nets, but the frontcourt matchup should be controlled by the Knicks.

However, the Nets should win the bench minutes by a sizable margin. Given the numerous battles for starting jobs in Brooklyn, the bench will have a huge edge over the Knicks, regardless of who starts and who comes off the bench.

The key matchup to watch in this game will be D’Angelo Russell against Tim Hardaway Jr. Both newcomers have a lot to prove after being let go by their previous teams (albeit under drastically different circumstances), and both players are good bets to take a ton of shots in this game. Overall, the Nets will look to push the pace and control the bench minutes in what will likely amount to an offensive contest.