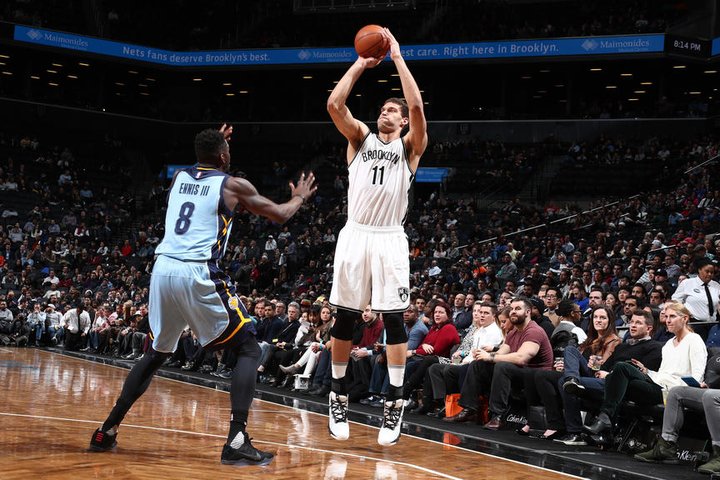 BROOKLYN, NY - FEBRUARY 13: Brook Lopez #11 of the Brooklyn Nets shoots the ball against the Memphis Grizzlies on February 13, 2017 at Barclays Center in Brooklyn, New York. NOTE TO USER: User expressly acknowledges and agrees that, by downloading and or using this Photograph, user is consenting to the terms and conditions of the Getty Images License Agreement. Mandatory Copyright Notice: Copyright 2017 NBAE (Photo by Nathaniel S. Butler/NBAE via Getty Images)
Home
Brooklyn Nets
Nicholas LeTourneau

On the second to last game before the All-Star break, and the night before Valentine’s Day, the Brooklyn Nets managed to not only break their fans hearts by continuing a 13-game losing steak in a 112-103 loss to the Memphis Grizzlies, but also remind everyone that there is no All-Star on this roster.

For once it was not the dreaded third quarter that was the Nets undoing, but instead the other three.

Brook Lopez had a bad game, finishing with 17 points while shooting one of five from deep and only grabbing three rebounds in 31 minutes. Other key players like Caris LeVert, Isaiah Whitehead, Joe Harris, and Trevor Booker failed to make their usual impact while Memphis saw big performances from Mike Conley, Marc Gasol, JaMycle Green, Brandon Wright, and Vince Carter.

There were some bright spots. Brooklyn only had 12 turnovers and stayed competitive in areas like fast break points, bench scoring, assists, steals, and points in the paint but it was the usual suspects of a lack of rebounding, interior defense, and poor three point shooting that led to the loss.

Every time Brook Lopez finishes a game with three rebounds, the basketball Gods weep. Going up the large frontcourt of Gasol, Randolph, Green, and Wright is a tough challenge for any team but it was a task that the Brooklyn Nets were not up for.

The Nets were out rebounded 41-32. In games that are this close, nine rebounds are the difference between a win and a loss. With Booker failing to make an impact and no Justin Hamilton or Quincy Acy, things weren’t looking good for Brooklyn on the boards.

At the point in the season, there isn’t much that can be done to solve this issue. With a frontcourt roster composed of a non-rebounding seven footer (Brook), a 6’8″ power forward (Booker), someone more suited for the Euroleague (Hamilton), and a 36 year old on his last lap (Luis Scola) there is only so much you can squeeze out. Against Memphis, they pulled down only seven rebounds.

This group of frontcourt players no only fail to rebound as a unit, but also fail to protect the paint as a unit. Lopez is a decent defender, but the others leave something to be desired. In this game, Memphis went 30 of 55 from inside the three point line. Of those 55 shots, 44 were taken inside the paint.

It is unfair to give all the blame to the frontcourt, as this is almost a chicken or the egg scenario. What causes bad the defense? Is it poor defense on the perimeter leads to guards driving the lane and opening up the offense or is it soft interior defense that lets players do what they want once they get into the lane? Unfortunately for the Nets it is both.

The only good or promising defenders on this team at the moment are Rondae Hollis-Jefferson and Caris LeVert. Without them, teams could do just about anything against Brooklyn. There is no one in the frontcourt that could go toe to toe with Anthony Davis or LaMarcus Aldridge for 31 minutes, and aside from RHJ and LeVert there is no one on the wing that could hold their own against LeBron James or Paul George for 31 minutes.

The three point shooting versus Memphis was not very good. Brooklyn took almost 40 threes and only made 12 of them, good for 32.4 percent on the game. Aside from Spencer Dinwiddie, who went four of five from deep, everyone else shot poorly from behind the line.

Lopez continued his recent slump, hitting only one of five from deep, while Sean Kilpatrick decided to try to shoot through it and went two of nine. LeVert attempted four shots and missed all of them and both Booker and Scola missed their attempts as well.

It does not take a basketball genius to figure out why this doesn’t always work.

Up until this season, Lopez wasn’t shooting threes at all. Kilpatrick is still learning what good shots in the NBA are, LeVert is a rookie and still figuring out how to be consistent, Booker hasn’t added that to his game consistently yet, and Scola should’ve retired two or three years ago. This is not a roster built to run Kenny Atkinson’s three point oriented motion offense, especially with no true point guard running the show.

This team needs to find a couple really good three point shooter and have Jeremy Lin return to the lineup. The system works and before the Lin injury it looked like this rag-tag group of misfits could’ve somehow stumbled their way into the eighth seed conversation. But now the Brooklyn Nets have by far the worst record in the NBA and all fans can do is wait for next season.