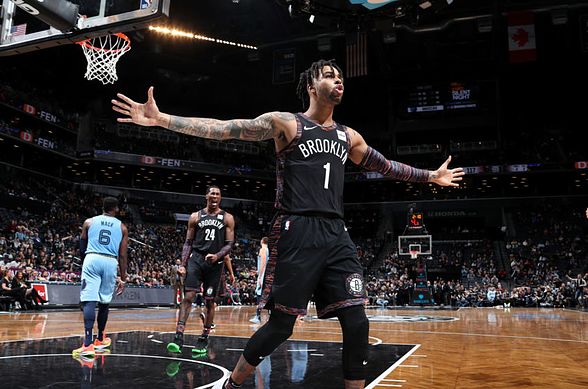 Well, that sucked. The Nets practically lost the unloseable game. To be fair, there was a lot that went wrong, but the things that went wrong were practically disastrous. Timing was everything in the mistakes Brooklyn made as they went down in their fifth straight loss, this time at the hands of the Memphis Grizzlies. Let’s look at the good and bad of the performance.

DeMarre Carroll found his feet in what was his best performance of the season. In 39 minutes Carroll racked up a double-double with 21 points (4/6 from three) and 12 rebounds in a showing that warranted a future upgrade to the starting lineup.

Ed Davis continued to do Ed Davis things. He flirted with a double-double himself (6 points, 9 rebounds) in only 19 minutes of play. He also led the team in box plus/minus (+9).

The guard play was great with Russell, Dinwiddie and Napier combining for 59 points. Napier was sensational off the bench and Dinwiddie continued his consistency in getting to the basket. Russell lifted the team offensively in crucial moments of overtime as well.

The team overall shot well from three (16/44) while also still getting to the line at a high rate, shooting 30 free throws for the evening, making 25 of them.

While the Nets didn’t do themselves in any favors down the stretch, there’s a credible argument to be made that the referees cost Brooklyn the win. There weren’t just some questionable calls by the officials, but blatant wrong calls.

#Nets coach Kenny Atkinson praised NBA for transparency of “Last Two-Minute Report” that said there were eight incorrect calls in final two minutes of regulation and 2 OTs, and 6 went against @BrooklynNets.

Eight incorrect calls. Eight! Again, the Nets shouldn’t have put themselves in that position in the first place. The ability to close out games is an essential skill of any good team. Right now, the Nets aren’t a good team. Blowing a seven-point lead with 33 seconds remaining simply shouldn’t happen. Dinwiddie summed it up best.

“We miss shots, they make shots. And then sometimes, like tonight, we make dumb plays . . . We know the story. Same [expletive] as always.”

Kenny was equally despondent but the beauty of basketball is you’re given the opportunity to respond.

“That’s a tough loss … we’re not having a party (in the locker room) … we’re upset, but we have to bounce back tomorrow,”