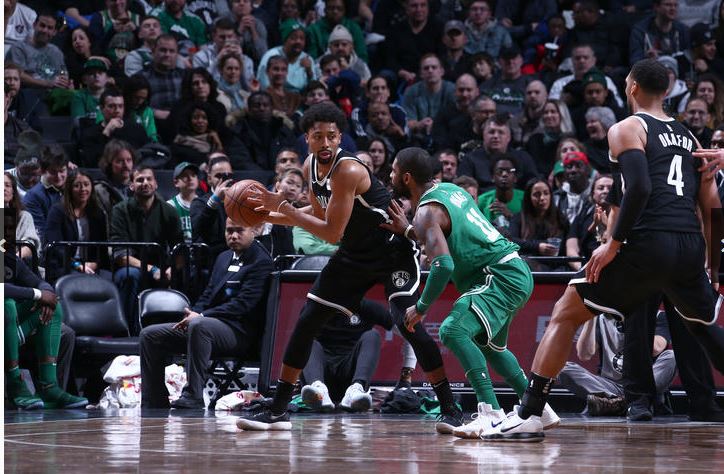 On a night where both offenses were ice cold, the Brooklyn Nets fell at home to the Boston Celtics 87-85. It was a game marked by gritty and grinding defenses where the team who got the most stops won the game. Boston, who lead the league in defensive efficiency (0.989), outlasted the Nets who now fall to 15-24 on the season.

Tonight’s game was a battle of attrition. Physical play on the block, uncalled fouls, and all round terrible shot making turned this game into a grind. Tensions reached an all-time high when Quincy Acy was fouled hard by Celtic’s power forward Daniel Theis. Worthy of a review, the officials didn’t bother taking a look at the replay. Instead, Acy was assessed a technical when he angrily shoulder bumped Theis in the chest after the foul.

Fast forward to the final seconds of the ball game and a host of fouls were missed. Down two with 20 seconds to go, the officials missed a foul on Spencer Dinwiddie by Kyrie Irving down low, causing him to stumble into the lane before the ball sailed out of bounds off Boston. With six seconds to go, Harris inbounded the ball to Rondae Hollis-Jefferson who appeared to be fouled by Boston’s Semi Ojeleye on the turnaround jumper. With the ball in the air, Hollis-Jefferson was able to corral the rebound and put up a last-second shot which fell short. Replays show Hollis-Jefferson was hit on the arm by Ojeleye but the referees once again dropped the ball.

Dinwiddie paced Brooklyn with 20 points (7-15 from the field, 1-5 from three) but it was the inspired play of Jahlil Okafor that put Brooklyn back into contention. His polished post game and ability to manhandle Boston’s bigs caused major headaches for the Celtics. With Baynes in foul trouble and the absence of Al Horford, Okafor posted 12 points, 5 rebounds and 2 blocks in 13 minutes. Why Brooklyn gave him such small playing time is beyond me.

Despite being tired the Nets managed to stay close in all the key stat categories.

Player of the Game: Jahlil Okafor