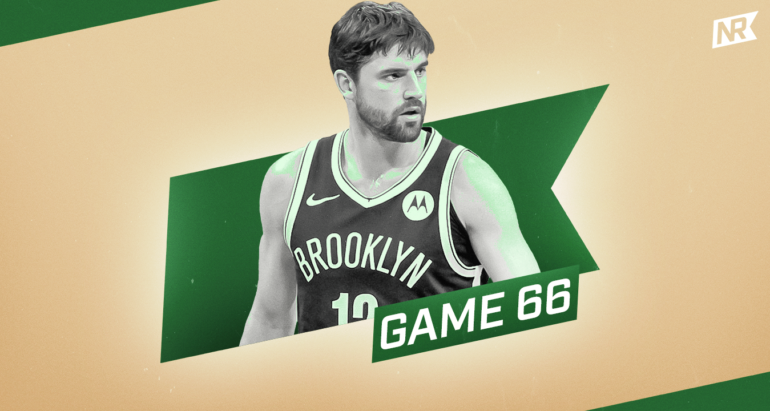 Although it wasn’t the NBA classic that we got on Sunday, Tuesday’s rematch between the Brooklyn Nets and Milwaukee Bucks still lived up to the hype. Once again, it saw Giannis Antetokounmpo and Kevin Durant dominate for stretches at a time. After feeling optimistic after only losing by three over the weekend, Tuesday’s loss puts a different taste in the mouths of Nets fans.

In a game of runs, the Nets were on the wrong end of one in the home stretch. Yes, it was close toward the end. But one could easily look at this game as one the Nets let slip through their fingers. Kyrie Irving and Kevin Durant combined for 70 points—with Irving dropping 38—in a bounce-back performance from the previous outing. However poor defense, shaky lineups, and subpar play from key role players ultimately led to a 124-118 defeat.

Here are three takeaways from the losing effort:

One of the bigger knocks against the Nets this season is their lack of physicality. This is especially relevant when considering how they’ll match up against opponents like Milwaukee. The Bucks flexed their muscle in rebounding, out-rebounding the Nets 55-39. Milwaukee also grabbed 15 offensive rebounds to Brooklyn’s 6. Milwaukee’s Donte DiVincenzo alone had 15 rebounds, which is unacceptable from the Nets’ perspective.

The huge disparity on the boards could be attributed to a multitude of reasons. Mainly, though, it was just a lack of effort and fight. Milwaukee just sent more bodies to the boards whenever a shot went up. DeAndre Jordan had a few rebounds poked away from him or had lazy box-outs that also led to offensive rebounds.

These types of lapses inside cannot happen if Brooklyn intends to make a run at a title. It’s simple: the more rebounds you get, the more possessions your team has. After Alize Johnson pulled down 21 rebounds the other night against the Pacers, one would think this would’ve been a game suited to his strengths. Milwaukee also outscored Brooklyn 44-30 in the paint, with a lot of those points coming off second-chance shots.

As much as people laud over Brooklyn’s “Big 3,” Milwaukee boasts an impressive three-star rotation as well. Jrue Holiday has shown to be a major improvement in the guard category for a Bucks squad that has fallen short in the playoffs the last few seasons. Just like Sunday, the trio of Holiday, Antetokounmpo, and Khris Middleton led the charge. Milwaukee’s “Big 3” combined for 82 of the team’s 124 points, and one of the three seemed to make a big basket whenever the team needed one. Holiday tallied 14 of his 23 points in the first quarter, including nine straight to end the opening frame. Although it felt like a quiet night for Middleton, who also finished with 23 points, he made some timely buckets, especially down the stretch.

And last, but certainly not least, what more can be said about Antetokounmpo? He posted another monster game with 36 points and 12 rebounds. Although his all-around jump shooting wasn’t as deadly as Sunday, he still connected on four of his three-point shots, albeit on 12 attempts. Now obviously the Nets’ “Big 3” has more firepower than Milwaukee’s, but Middleton and Holiday are All-Stars in their own right and are as solid as they come. As we’ve seen the last two games, they are more than capable of carrying this team on their backs.

There has been a constant war between Nets fans and the lineups Steve Nash employs throughout the course of a game. Sunday saw one of Nash’s lineup decisions in the second quarter shift the tide of the game, and Tuesday was the same. Although Nash didn’t take both his stars out in the second quarter this time, he did make a head-scratching decision by leaving DeAndre Jordan in even after Antetokounmpo left the floor following his third foul.

Two huge lineup blunders happened in the fourth quarter that one could argue lost the game for Brooklyn. To start the quarter, Nash had both Durant and Irving on the bench. Now, this exact strategy plagued the Nets in Sunday’s second quarter. However, it worked pretty well for the first two minutes or so of the fourth quarter. A lineup consisting of Mike James, Landry Shamet, Jeff Green, Blake Griffin, and Joe Harris graced the floor for the Nets and started out on fire. The group connected on a couple of threes and had the Nets up six. However, Milwaukee started to turn the tide and the bench unit sputtered. Nash should’ve pulled the group once the lead was cut to one, but he instead let it ride. The Bucks ended up taking the lead with just under nine minutes remaining.

At that time, Durant was inserted back into the game, but Nash also made the curious decision to add Bruce Brown along with Irving. At that point, Brooklyn had a lineup consisting of three guards all under 6’3″. This prompted Milwaukee to go on a 12-2 run, essentially grabbing control of the game from that point on. It’s interesting to note neither Tyler Johnson nor Alize Johnson played despite being active.

Yes, the lineups will be different once Harden returns. However, Nash continues to make questionable calls with in-game lineups that have to make even the most confident Nets fan a little weary.